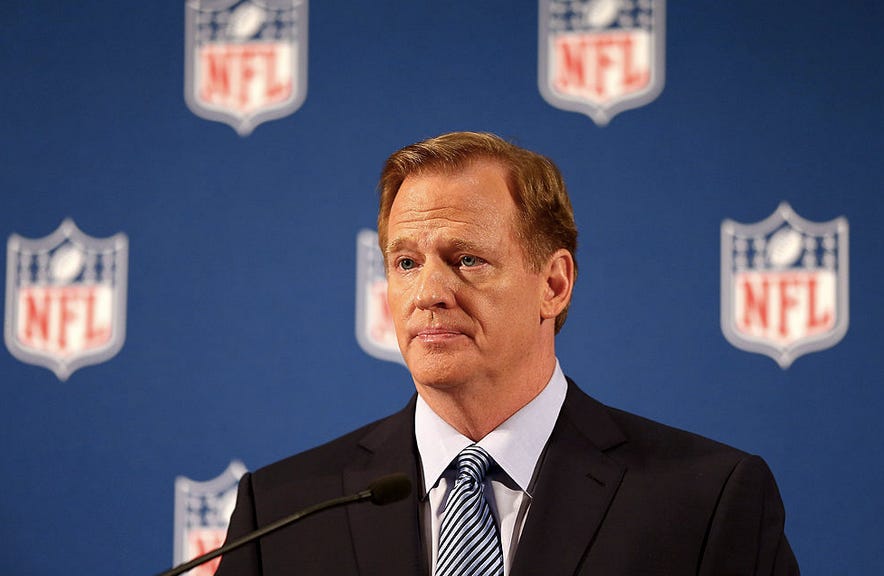 (Starts talking about Goodell at 25 minutes)

So Roger Goodell is a sociopath, right? I’m not a behavioral therapist but I believe that the main distinction with a sociopath and a normal human is the ability to feel empathy. Of course that’s what Roger Goodell is. We’ve known that forever but now it’s just official, he’s a legitimately insane and disturbed human being. He’s a person who doesn’t know what emotions are. HE’S A PERSON THAT NEEDS VIDEO GAMES TO TEACH HIM HOW TO FEEL. I mean we’ve made that joke a million times, that he’s a robot giving bullshit press conferences, but now it’s official that he literally has to learn feelings. The Army uses VR to practice and learn about battles, athletes use VR to learn how to respond to certain in-game situations, Roger Goodell uses VR to try and learn when to fake sad.

The funniest part of all of this is Adam Silver went to the same program and learned what the NBA fan experience is like. Silver, the best commissioner in pro sports and it’s not close, wanted to live like his fans live so he can try his best to improve it. Roger Goodell? He wanted to know what makes people sad so he can pretend to give a fuck. Seriously a monster. A robot monster who has to learn emotions. HE HAS TO LEARN EMOTIONS. I can’t say that loudly enough. LEARN. EMOTIONS. Roger Goodell is the shittiest redhead robot that’s ever existed. Fuck him.