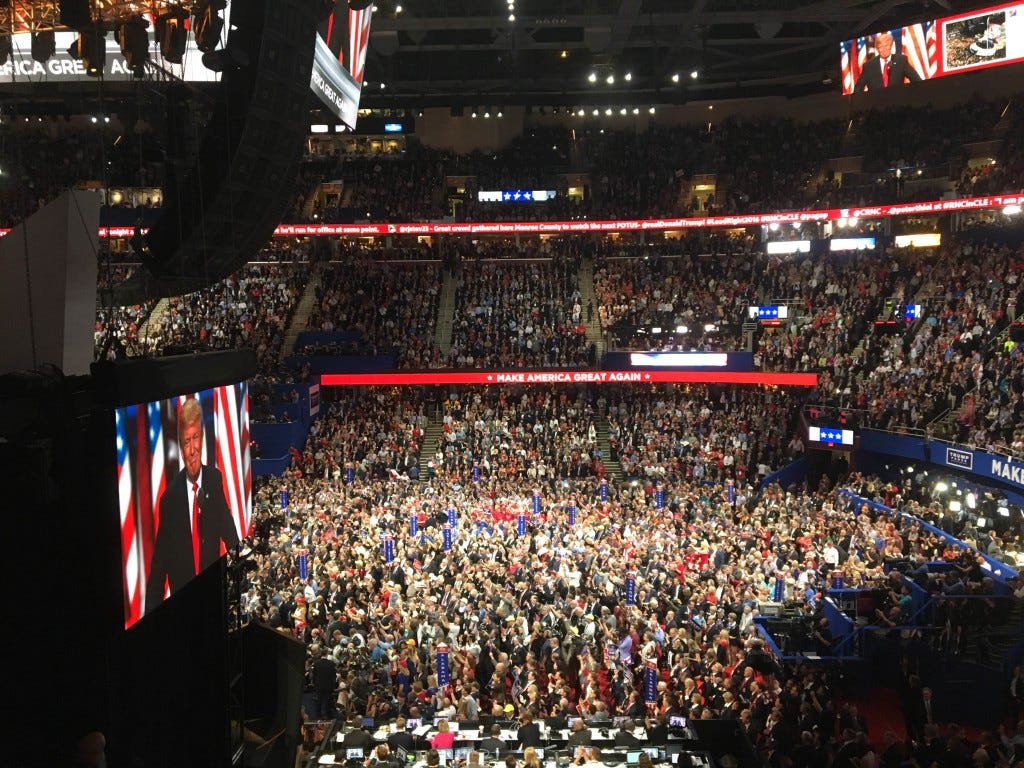 I think I’m done with politics. Everything is too political these days, from the protesters to the speeches, to the conversations you have with strangers who you supsect might be using the incorrect bathroom. When was the last time politics actually made anyone happy? Even when your winning, you can’t believe how dumb the other side is, and when your losing you are about 3 powerfully delivered speeches away from civil war. If Skip Bayless and Stephan A Smith reunited to form a new independent party that refused to inject their personal poltical views into elections, they would clean up at the polls and absolutely dominate the debate.

So that’s why the most sports-like politician of all time Donald Trump has done so well and the only suprise is that it has been such a suprise. The city of Cleveland basically spent the last two years preparing for pretty much any Republican in the world except Donald Trump to be the nomninee. They moved all the homeless people out of the downtown area by I guess asking Jimmy Haslem to give them cushy jobs in the Browns front office. They rennovated hotels and took down that menacing poster of LeBron throwing cocaine into the air. They changed the massive Four Loko mural next to some bridge into a Miller Lite one. Even the guys who hang out in the public square selling meth were also registering people to vote (this is honestly a true thing I saw.) If you asked me to host a RNC alls I would do is just make sure there were plenty of lanyards and all the strip clubs and churches were clean and open.

But Trump threw a wrench into everything. Jeb called him “the chaos candidate” which only emboldened him. If just the right butterfly was going to need to get crushed at just the right moment halfway around the world in order for Trump to be President, then Donald was going to build a sweatshop in the Phillpeans of 700 workers making 30 cents a hour stepping on the most beautiful, strongest butterflies in the country, alot of people would say the world even. And it worked. But the ramification of this was that a bunch of sore republican establishment losers refused to show up and it left hotels avalable for booking as late as Thursday night and a speaking roster that more resembled a reality show for some reason than the traditional guests. He had Natalie Gulbis, Dana White, and Tim Tebow kind of. He’s playing the hits. He stuck to sports more than any other recent candidate. And its working.

Everyone was worried about securty outside but the protesters themselves were weak compared with anything that goes on in the muni lot down the road before a divisional game. Like a couple dozen people got arrested and thats it. One guy tried to burn a flag, which I guess he actually phoned ahead and got a permit for like a nerd. But he accidentally started to catch himself on fire which would of been some real old school shit, and then the police and fire department had to put him out.  Everyone was so calm for most of the week passing out water bottles to each other, and there was free Skyline chili for anyone that wanted it: 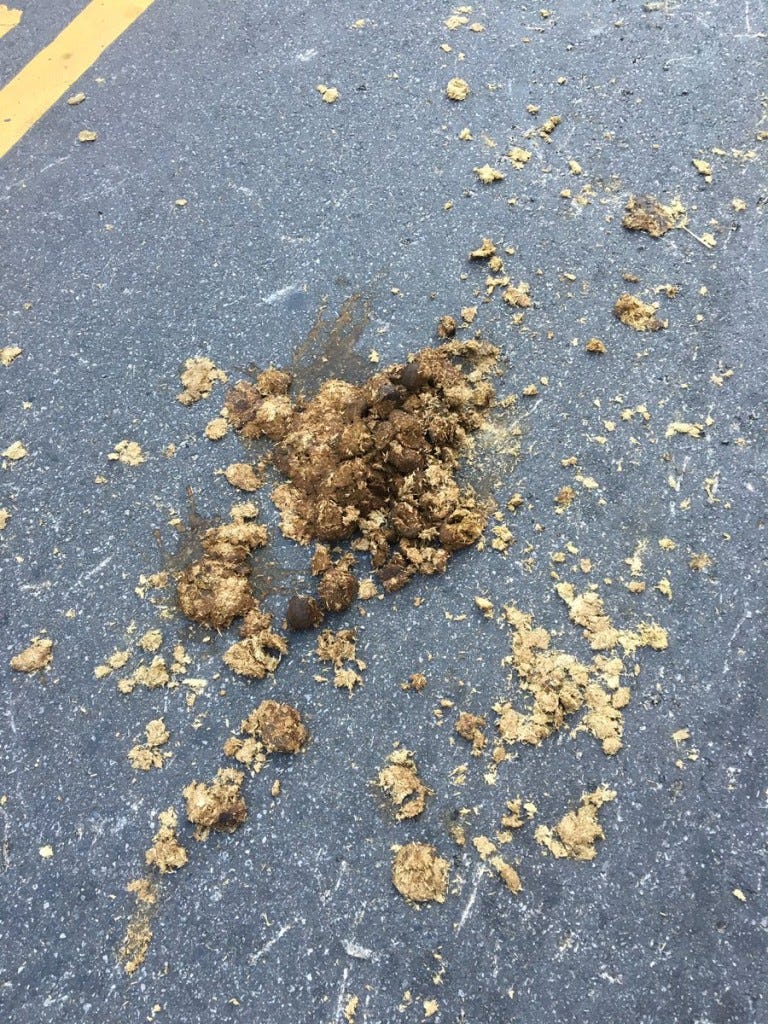 The only thing Americans care about enough to really show up and cause trouble is either when there favorite team loses really bad, or wins something important. One thing protesting is still good for though- is getting on TV and having reporter’s write about you:

So while the protests were basically just attenton contests between everyone and Alex Jones, there was still a nation divided. Trump was going to need a hell of a speech. And if there’s one thing Trump can do, its bring the hell.

I was not credentalled to get in, but its easy to sneak into a minimum securty affair like the RNC as long as your white, and you find a credential from another white guy, and the secret service guards are racist and cant tell the difference between the two of you.

“This is not believable but this is what’s happening.”

Without a doubt this was the line from Trumps acceptance speech that summed it all up for all the left wingers and RINOs who revealed themselves as frauds for refusing to comment on Joe Flacco or deny that their father killed John F Kennedy. Trump was here to tell you that folks, things dont look good.

He’s being slammed for going too negative in his speech where he basically said that everything sucks right now In Amerca. But Trumps a salesman. Its a little something called underpromising and overdelivering and managing expectations. Obama campaigned on Hope like a fool, and then flash forward 7 years later and Prince is dead and most of us aren’t having as much sex as we’d like, and so it makes him look like he’s full of crap. Orange is the new Black folks.

But if you swing the other way and basicaly say “we’re all in this gigantic mess together” people will actually appreciate the small victories you might have. Its all about perspective. If your buying a company, and lets face it- America is and should be run like a company- you want to drive down the value of it before you take it over. That way stockholders will be more willing to tolerate a few early losses/minor purges if they beleve you hold the path to liquidity. Its the Sam Heinke effect.

Trump also showed he’s willing to reach across the aisle with his heartfelt appeal to the LGBTQ communty. he generously offered to protect them from their biggest threat- ISIS- which is like Hillary explaning that her focus on renewable energy is an effort to protect NRA members from getting black lung. And his statement that he’s “going to take all the bad trade agreements and make them good trade agreements” is good news for Browns fans, but bad news for Trent Richardson.

If seeing Trump accept the nomnation for President is the most American thing of all time, then watching Kid Rock perform in a celebration of Donald Trump accepting the nomnation for President actually one ups it. Thanksfully a PMT/PFTC subscriber Will was able to hook it up in a massive way so I could complete a back to back Trump/Kid Rock double shot of red white and blue.

If you ask me the best part of the Kid Rock show was the very beginning where he said he wasnt politically correct and literally told people “the exits right over there” if they were easily offended. Might send him a cease and desist I havent decided.Then he hit the opening line to “You never met a motherfucker quite like me” and I swear to God a image of 9/11 with people running away from a collapsing WTC building that had Kid Rocks screaming face photoshopped into the explosion popped up on the big screen. Theres the door PC nerds.

He put on a absolute hell of a show depsite the fact there was no Joe C hologram, and the crowd was absolutely insane:

And I’ll sign off with probably the quote of the night from my main man Robby Van Winkle: