You know what the most entertaining thing about the RNC has been? Well it’s been the RNC. But you know what the second most entertaining thing has just been about the RNC? The ridiculousness inside and out. I mean our director of content and PFT are both out there and they are probably not even in the Top 1,000 for craziest sons of bitches in Cleveland for the week. Loony toons everywhere. And now someone like Chris Matthews appears to be punch drunk off his ass after watching Lying Ted get booed off stage and Donald Trump almost kiss his V.P. candidate. Look at this face. That is a man ready to throw “Bill Cosby is dead jokes” out all willy nilly as he lets his hair down on live TV. 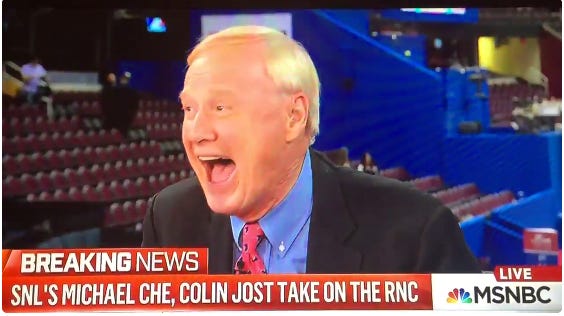 Fucking fantastic. And just casually laughing as he brings up Lucifer quote from Ben Carson while Che and Jost look at him like he is the drunk grandpa spouting off nonsense from his own corner of the Thanksgiving table was great too. The 2016 Presidential election may go down as the Stone Cold Stunner for America. But holy shit this stuff is fun.

Also as a semi-regular SNL watcher these days, there’s just something off on Colin Jost. I can’t put my finger on it, but this picture is definitely another piece of the puzzle sliding into place. 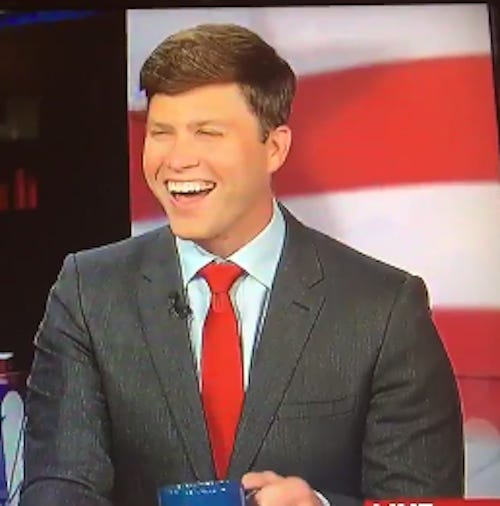