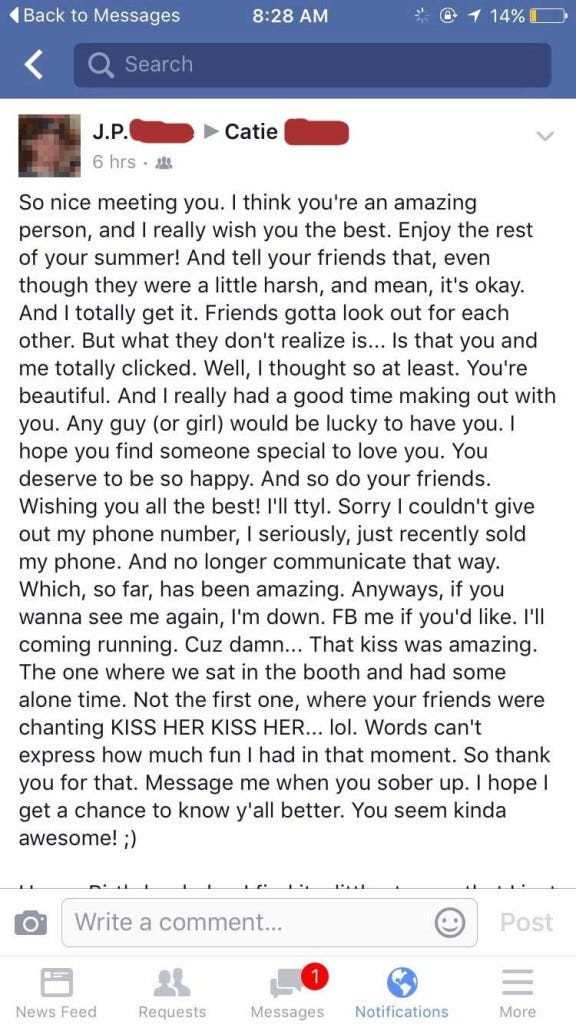 Right off the bat there’s one thing I can’t get over: How do you do this in 2016? There are so many ways to contact this chick privately or in a way that you know only she would see it. And instead you broadcast this? Like don’t get me wrong, the content of the message isn’t getting any better regardless of whether it’s a Facebook wall post, an Instagram DM, or a photo of a courier pigeon sent via Snapchat, and there’s still a chance that she could have shared it anyway and had it blow up. But instead you’re posting it in a public-for-her place on a Facebook wall — a way where I’m pretty sure people don’t even communicate any more outside of half-hearted birthday wishes — leaving this weird “I want to love you and making out with you was the greatest night of my life and also I don’t have a phone and there’s at least a 50 percent chance I’m posting this from a library computer” rant complete with a randomly inserted “I’ll ttyl” in between the 1,000 words of clingy weirdness…just a negative infinity game situation where I’m not sure how he pulled anything off in real life.

Plus in terms of a follow-up, there is nothing that will knock you down into the deepest pits of unfuckability more than “I don’t have a phone.” You can pretend it’s to disconnect from the world or that you prefer communicating other ways or even say you had a crippling tech addiction that means you need to have phones out of your life. Doesn’t matter, it all reads to a girl as “Broke as shit.” If only this dude had a phone and could afford a little data to learn that little lifehack.

Sucks because these two crazy kids seemed like they could have made it, no better first stop on the pathway to true love than making out with a shitfaced 21-year-old on her birthday while her friends are trolling her into doing it. A Nicholas Sparks novel come to reality.