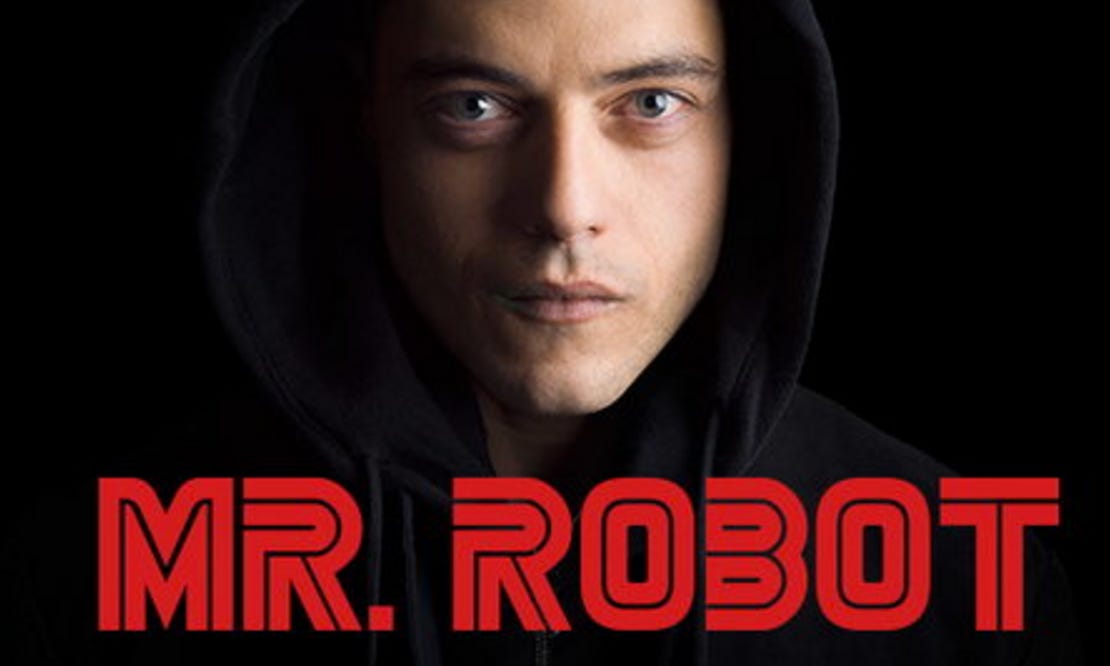 Season 2 of Mr. Robot has arrived, and saying it delivered last night is a gross understatement. Shit is FIRE. If you’re not on the Mr. Robot Train, get on now. You’re already late to the party but you dont wanna be one of those people jumping on during Season 4 like Breaking Bad. I’ve been saying from the jump that this show has a lot of Breaking Bad type vibes, just swapping the drug game for the hacker world, but after seeing how much they delivered on this 2 part start to season 2, I think it really has the same type of potential that BB did. Sam Esmail has the potential to be the next Vince Gilligan. Rami Malek’s Elliot has the chance to be a Walter White type character. The same way that Mad Men and Breaking Bad changed the entire perception AMC, I think Mr. Robot can do for USA. I’m sure most will think thats hyperbole but if you watch this show and appreciate how deep and intricate its getting and how UNREAL the acting is, you know the sort of potential this show has.

The season 2 premiere starts right where S1 left off. Fsociety has erased all debt, the world is in economic and social chaos, and Elliot has checked out of the hacker game. It appears as if he’s gone cold turkey, removing himself from Fsociety and avoiding computers all together, and the main conflict is Elliot’s internal turmoil as he faces the power struggle between his two personalities – Elliot and Mr. Robot. The Mr. Robot side of him is trying to convince Elliot to begin hacking again and finish what they started – the Elliot side of things is hell bent on getting Mr. Robot to tell him where Tyrell Wellick is (Remember, Wellick woke up in that car 3 days after the hack occurred and nobody knows where he is.) And this struggle is all taking place as Elliot now lives with his mom in a completely analog world. He wakes up in a small room in his mother’s house, eats lunch and dinner with his new friend Leon (Joey Bada$$), watches guys play pick up basketball at the park, writes in his journal, goes to sleep, and repeats. Elliot has created this boring monotonous routine in an effort to keep Mr. Robot at bay and stay removed from hacking. Or, has he?

The whole set up of Elliot’s life seemed weird from the jump. Moving back in with his mother was weird. Having this random new friend that he eats every meal with was bizarre. Elliot watching random guys play basketball seemed even stranger. The way Darryl from The Office knew who Elliot was and how he was good with computers. The setting, the interactions, the characters, it all seemed very strange, unrealistic, and unlikely. Now with a show like Mr. Robot when things seem out of place you automatically assume its not real. I thought his Mom was a figment of his imagination. I thought Darryl was maybe some sort of third personality. But I turned off the TV and left myself mind-fucked, unsure of what really was going on. Enter, the Internet. Via Reddit, where one guy has compiled multiple theories from other Redditors, which essentially lays out the idea that Elliot is actually in prison/a psyche ward, and this entire reality of him living at home with his mother is in his head:

–He is now institutionalized/jailed before having a trial (Guideon threatens him with info against him, Fsociety has Guideon killed to protect Elliot)

–Very bland, sliding door like a cell (if i remember correctly), double doors to get to the rest of the “house”, makes his bed every morning, no technology/recreational belongings

–Eats every single meal with Leon in the same exact cafeteria/diner-looking place and never talks (who would hold this type of friendship unless forced), Leon only talks about television (what else is there for him to do?), intense basketball games as if in jail, Ray is a social worker (calm, diffuses fights, “my line of work”), the dog is a therapy dog (old, calm, trained to key in on people like Elliot), his mother is a guard/nurse that is assigned to him (she’s the sternest person he knows and keeps him on routine)

–Routine bible groups and prison-style phone at the end

I think the slipper fits, Cinderella! The meeting with Gideon definitely felt like a visit in some sort of prison or institution with his “mom” being a guard-type looking over them. The Leon friendship and the basketball games both seem exactly like prison. Ray (Darryl from the Office) with the dog threw me for a loop, but the way he diffused that fight over the basketball and knew everything about Elliot seems to fit the idea of someone working at an institution. The maniacs on the internet dive even further with screengrabs and details – “Hot Carla” the “prettiest girl on the block,” is a prison tranny: 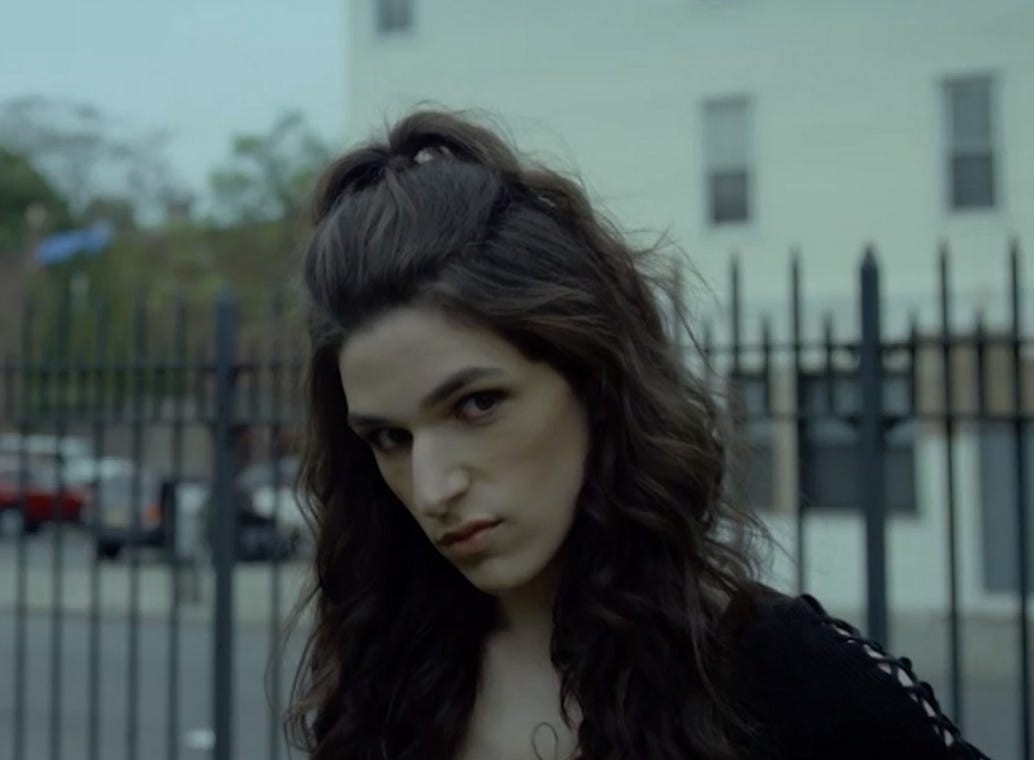 What kind of restaurant serves a plate of food like this: 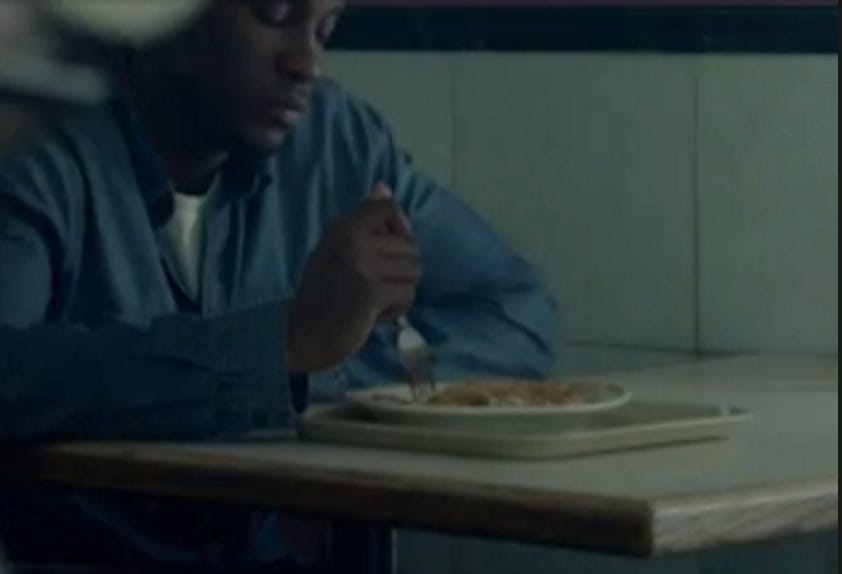 They also noted they are using metal forks so that it must be a mental institution since that type of silverware isnt allowed in prison. Even noting how bizarre the outdoor scenery looked, with bars on every window and no cars on the streets: 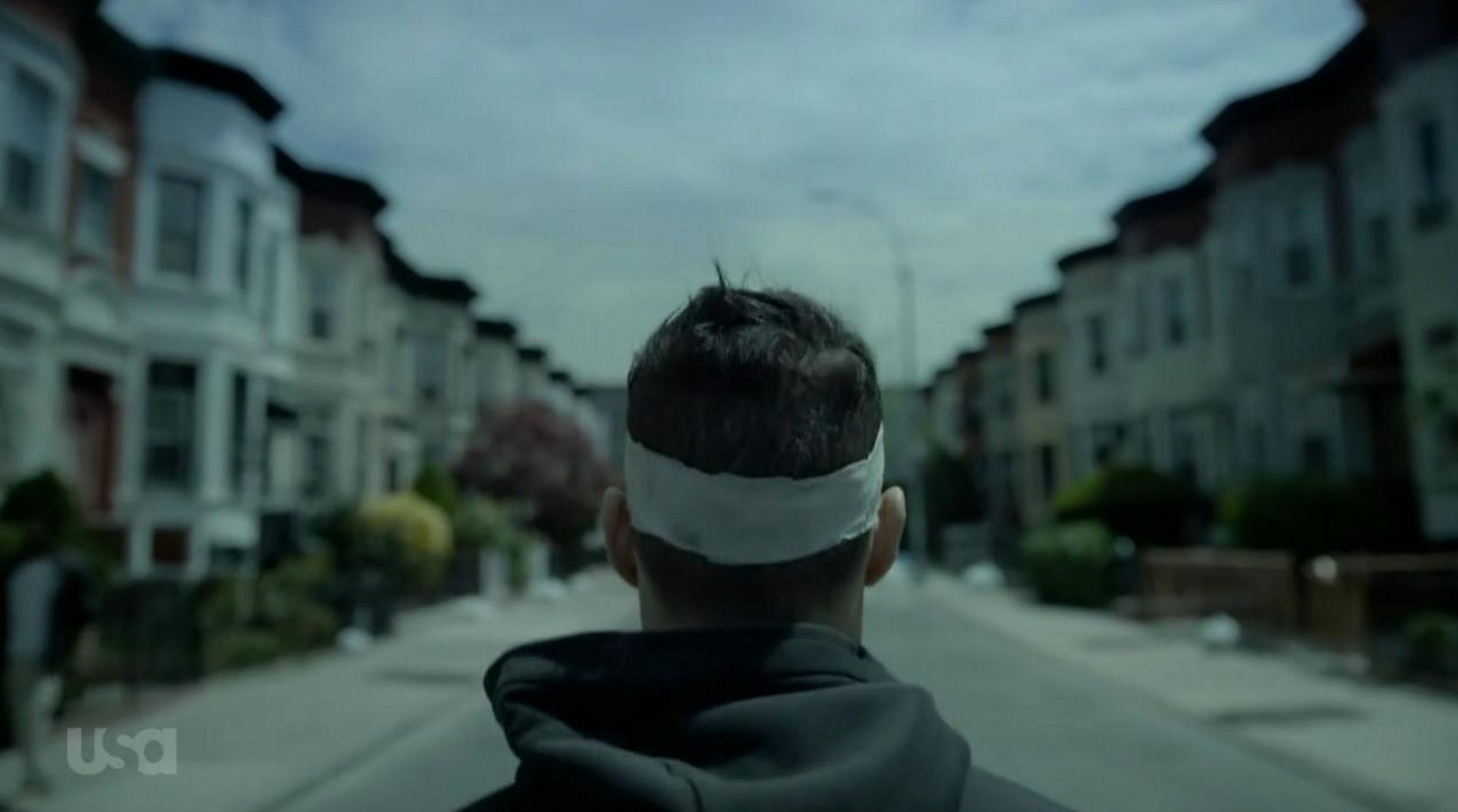 I mean we’re talking next level obsessive analysis. Some of it more concrete than others. Some of it fits better than others. But overall, I buy into this theory. I’m sure there are pieces of last nights show that disprove some of these ideas but nothing major jumps out. But on some level this all definitely works. Maybe he was caught and is in prison, maybe he checked himself into a mental institution (that would explain Mr. Robot saying “how much longer are YOU gonna keep us in this analog nightmare?” Like he is free to leave if he wants) or maybe its all just symbolism and a metaphor for Elliot being a prisoner inside his own mind. But if there was a big reveal in the next couple episodes that ends with Elliot getting out, going full Mr. Robot, and getting back into the game, that would be spectacular.

The final piece of this theory fitting? Last night on the aftershow “Hacking Robot,” Andy Greenwald asking Rami Malek to explain his character in one word. Rami’s response was “committed.” Which I think is a very calculated, double meaning response.

Other things about yesterdays premiere:

There were a lot of tremendous scenes in Part 2 of the premiere episode – the CEO of E Corp Phillip Price telling that board of people that he refuses to resign and saying how they need to continue to con the American public was some baller villain type shit. Scott burning the $5.9 million in the middle of the park (how does nobody around him grab a few stacks of cash????) Tyrell Wellick’s SMOKESHOW wife bound and gagged getting slapped like she was in a Kink.com video. All of it tremendous. But this scene between Elliot and Mr. Robot takes the cake for me:

Perfect demonstration of the lunacy going on inside Elliot’s head. The first time we see Mr. Robot unsure of himself, realizing that the good side of Elliot might be in power. Barely like 50 words spoken and some of the best acting the show has seen. When Elliot spun around with that Joker like smile I was genuinely creeped out. Thought he was going to get shot again, or perhaps even shoot himself and turn full Mr. Robot, but what we got was even better.

Gideon’s death was harsh, man. Hes the one dude with like zero blood on his hands and he ends up with a bullet to the neck. Very much fits into the theme of this show that the reason why society is fucked up is because nice guys finish last.

And it appears that Angela has gotten infinitely more sexy now that shes a slave to Ecorp: 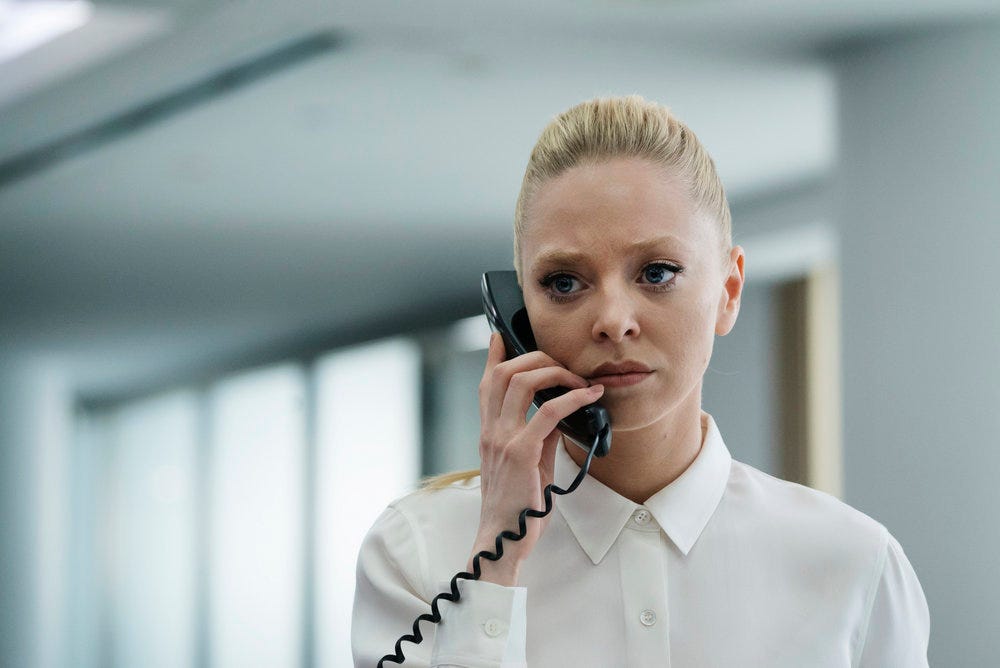 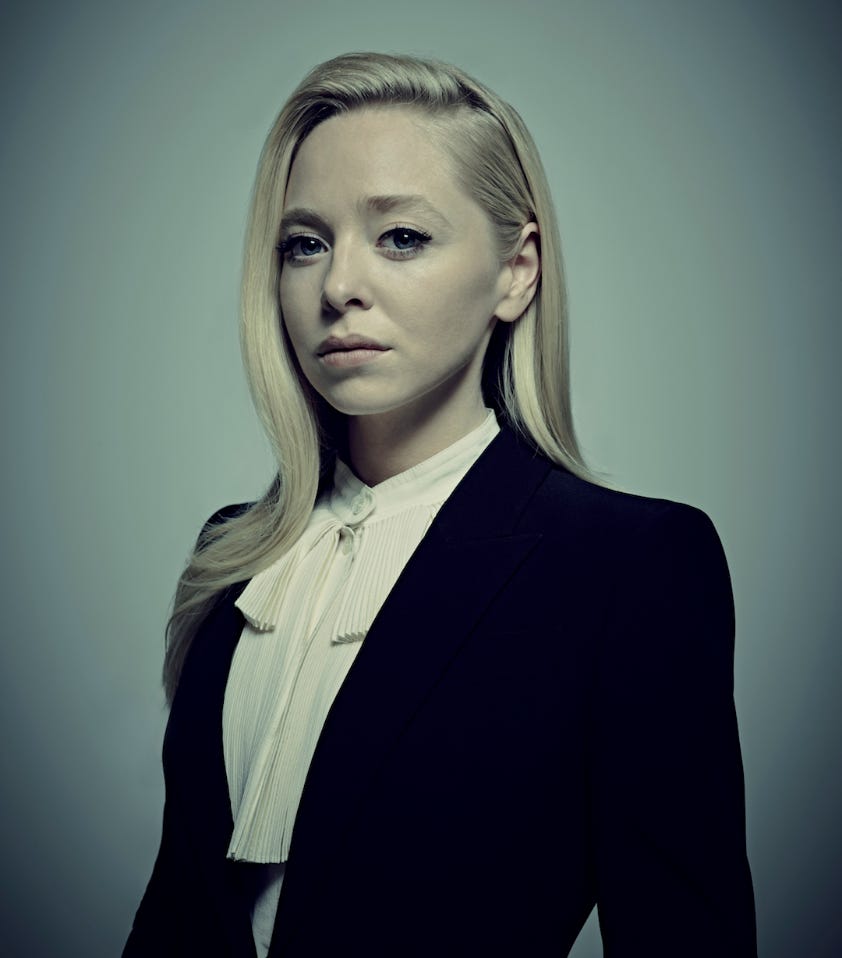 This slicked back tight pony tail. That hair yanked to the side. The power suits. The sell out mentality (even though its all a farce) its got me feeling some kinda way.

In conclusion, I came in with unrealistically high expectations for Season 2, and the 2 part premiere combined with the internet buzz might have actually exceeded them.