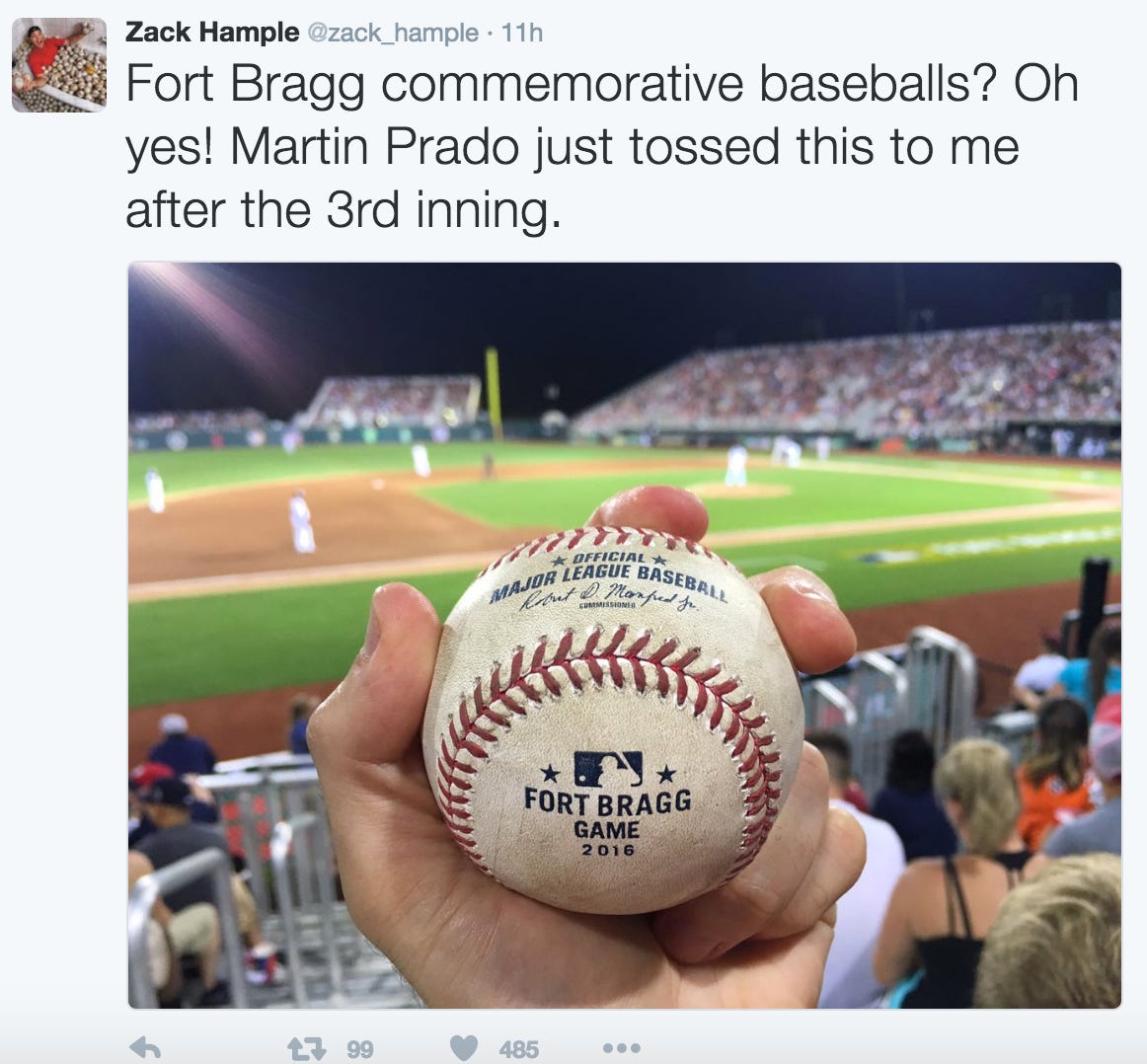 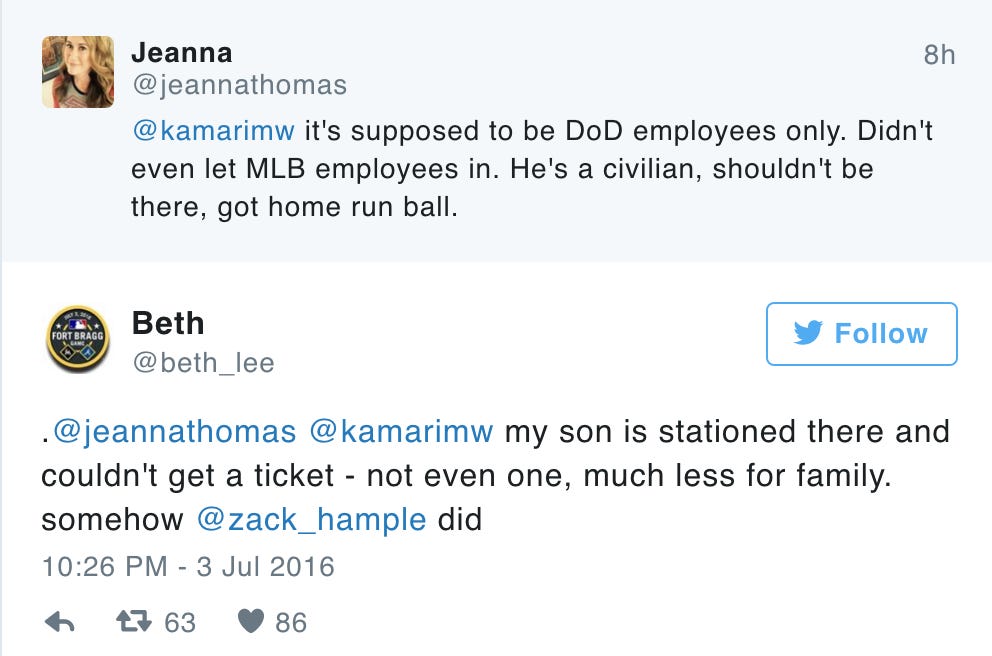 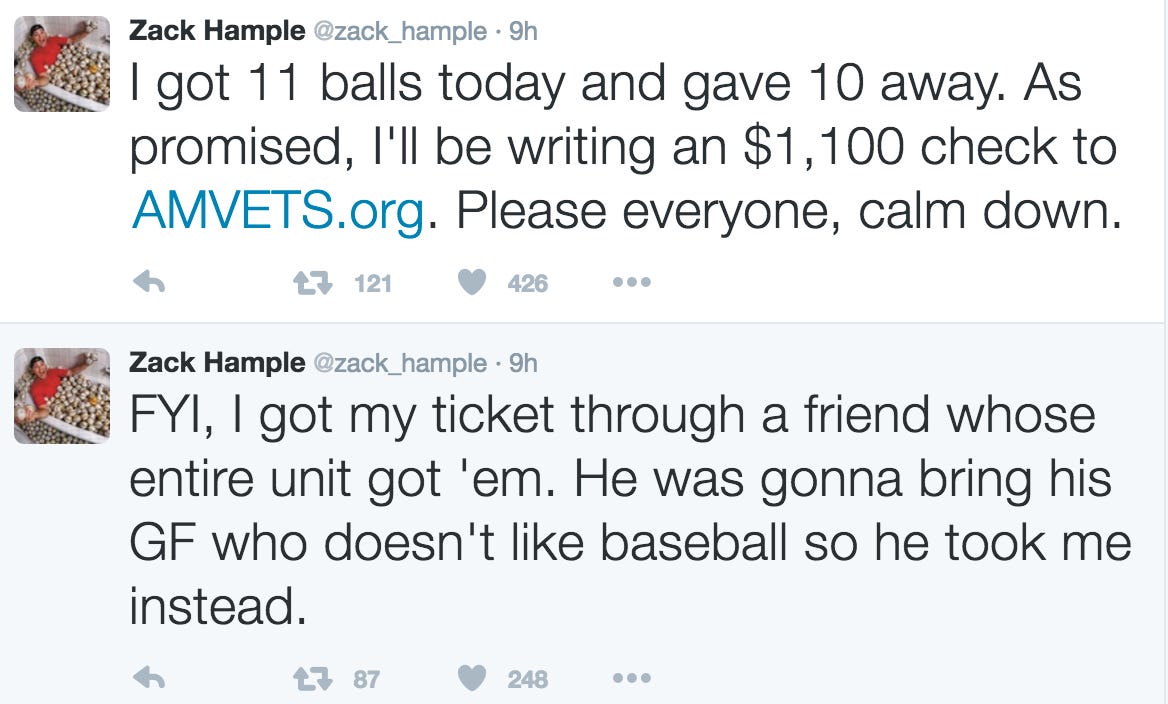 Our boy Foul Ball Guy is DEEP in it on this one. There’s no angry mod like military angry mob and at the moment their pitchforks and torches are aimed directly at him.

Now as I understand it, tickets were given out to the servicemen and women at Fort Bragg and I am assuming they could bring whoever they wanted. If some dude brought Zack Hample, I dont think thats a huge deal. The problem is that we know he was on Tinder telling people he’d throw out a G for tickets to the game:

So thats not really the best of looks. Hard to believe that when you were out there saying you’d pay for a platonic baseball adventure, Zack! Naturally the internet is up in arms and freaking out because thats what the internet does. Me personally? I think people are going way overboard. I understand the tickets were for members of the military but we’re talking about a goddam Marlins/Braves game. I dont think I’d even want to go if I was stationed at Fort Bragg. Its not like he stole to last spot on a life boat from one of these men or women. But I suppose the bottom line is if there was soldiers out there that wanted to be in the building and couldnt go and Zack Hample is in there, then he shouldnt have been. Plain and simple. If he was truly a guest of someone, then thats fine. But it obviously looks a little shady and contrived with that Tinder bio. So if people were struggling to get in the building and he’s there, then thats not right.

But I think the internet kinda hates Zack Hample because he’s weird and has a quirky weird habit and so they are just looking for reasons to attack. I mean, if that donation is serious, then whats your beef? Nobody else in the building donated $1,100 to the armed forces. Yea, one more soldier could have been in there and watched the game but I’d say Zack made up for it with that donation. (Assuming he actually did donate.) I just think this is a clear case of internet hysteria. A Foul Ball Guy witch hunt. Most people hate the 40 year old man making it his life’s work to grab foul balls at a baseball game and now they’ve finally got their angle to trash him. I’d like to think that if some soldier came up to Zack Hample before the game and said he couldnt get in and would like to go, Zack would do the right thing and give him his ticket. He got in the building and didnt think about the internet deciding he was an unAmerican piece of shit and now he’s in the spin cycle just getting thrashed around.  To me its just a classic case of an internet overreaction and people jumping on the bandwagon. I also don’t like people speaking for others, especially service members/veterans. The internet loves to support them often out of their own self interests. So if there was members of the armed forces that have a problem with it, then Zack, guess what? You fucked up. But all the Twitter Eggs jumping on the latest internet news cycle can STFU. Veterans need a LOT more help and support from the public in areas that are a LOT more important than a baseball game. Wheres your twitter outrage for all those issues surrounding our armed forces and veterans?