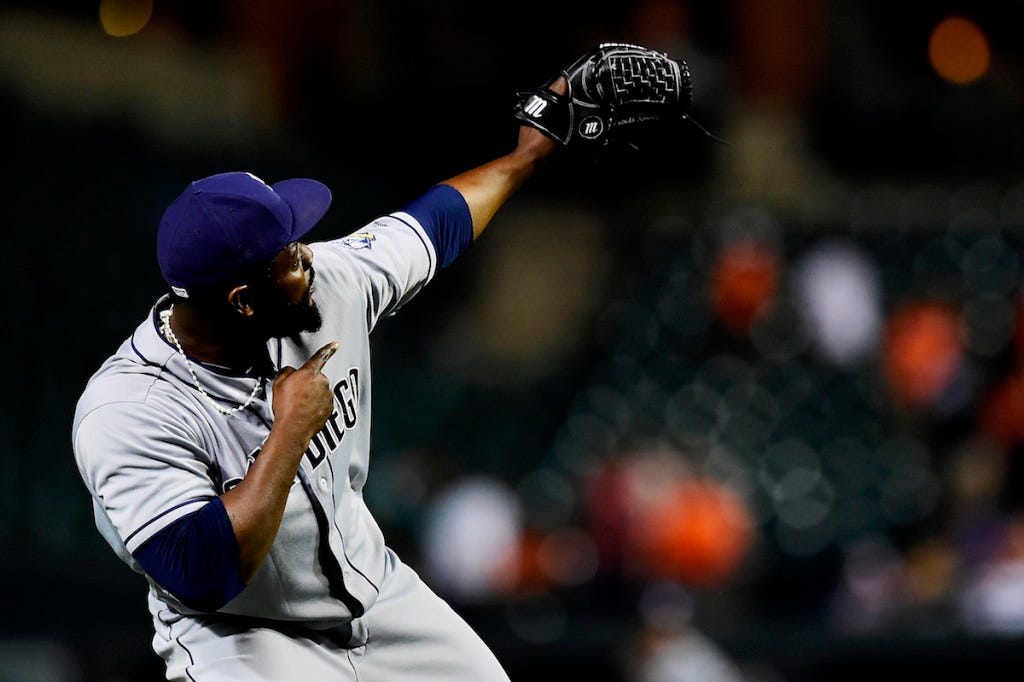 The Marlins have acquired relief pitcher Fernando Rodney, who is having a WAY better season than you thought he was, or perhaps you didn’t even realize he was still in professional baseball. Well, surprise! Not only is he still in the MLB, but he has a 0.31 ERA in 28 appearances this season with the San Diego Padres. Out of those 28 appearances, 27 of them have been scoreless, and the one appearance that wasn’t scoreless, he only allowed one earned run. July 1 is tomorrow, and 39-year-old Fernando Rodney has allowed one earned run all season. The Miami Marlins just passed the New York Mets in the NL East standings, they’re in it to win it, and their first move is to bring in 39-year-old Fernando Rodney. What a time.

Old white guys hate Fernando Rodney because he wears his hat crooked and shoots imaginary arrows into the sky after he earns a save. I’m being dead serious — I have no idea what his voice sounds like. For a guy who is that animated on the mound, I don’t think I’ve ever heard him speak before. He kinda just goes about his business, racks up a ton of saves, and disappears into the shadows. He’s an enigma.

It’s not that the Marlins need a closer right now, either. Marlins closer AJ Ramos has been nails this year, after the season started with Carter Capps being the favorite to land the closer’s job. Capps ended up needing Tommy John surgery, while Ramos has gone on to post a 1.74 ERA with 24 saves and 38 strikeouts in 31 innings. The Marlins likely are taking note of the recent trend in baseball where dominant bullpens have prevailed in October. Not that Miami would be a heavy favorite should they get there, but I like their chances in a one-game playoff with Jose Fernandez on the mound and a shutdown bullpen behind him.

If you’re a Marlins fan, you’re kinda just rooting for a postseason appearance, and we’ll see what happens from there. The odds of the Marlins winning a championship this season are highly unlikely, but getting there would sure be nice. As far as what they had to give up for Rodney, it wasn’t exactly a no-name minor leaguer. Single-A right-hander Chris Paddack goes to San Diego, who Keith Law says “hasn’t given up a hit in forever.” #analysis