CBS - Welcome America festivities continue today and big part of that – weighing in at six tons – is centered around a sandwich. 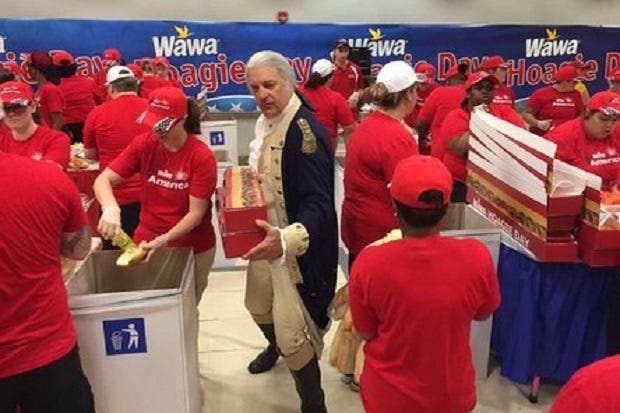 Listen up, you beautiful bitches. Because I’m about to fuck you all up with some truth. I don’t know how or when it started. But for some reason, people feel the need these days to constantly bash on the city of Philadelphia. For some reason, people think it’s okay to just dismiss Philly as a second rate city. They constantly feel the urge to take shots at this town. And that’s okay. It doesn’t bother us because we get that nobody likes us. It’s part of who we are. It’s just in our DNA at this point to accept that as a fact. But I will not idly sit back and let everybody forget that without Philadelphia, there is no America. July 4th, 1776. Philadelphia, Pennsylvania. A little document called the Declaration of Independence. Ever heard of it? Because it’s only the most important document in American history. And without Philly being here to make it all happen, we’d still be a bunch of British pussies right now still trying to figure out how in the hell to Brexit from those ass clowns. That’s right. Philadelphia created America. Philadelphia is America. And nothing symbolizes that better than Wawa throwing together 6 TONS of hoagie right in the face of the rest of the world.

This is America, goddammit. And in America, we must not be afraid to dream big. We reach for the moon and say fuck the stars. Rock, Flag, Eagle. You think any other city in any other nation can throw together 6 tons of hoagie at any given notice? Shit no. But when the people of Philadelphia are called upon to the task, they roll their sleeves up, grab a few hundred pounds of lunch meat and get to fucking work. Is it kind of a cop out to make 23,000 shorties instead of one giant 6 ton hoagie? Yeah, maybe. But that’s besides the point. The story here is that ISIS can suck a dick. Russia can suck a dick. North Korea and China and most of the Middle East and pretty much everywhere else can all suck a nice fat dick. Because I’m proud to be an American. Where at least I know I’m free to eat as much convenience store hoagie as any human could possibly handle. And I won’t forget the men who died who gave that right to me. Boston has their tea party. Well now Philly has our own. But instead of shitty tea, we’re partying like a bunch of rock stars and dominating enough hoagies to feed Africa for the next decade. Because that’s the American way.