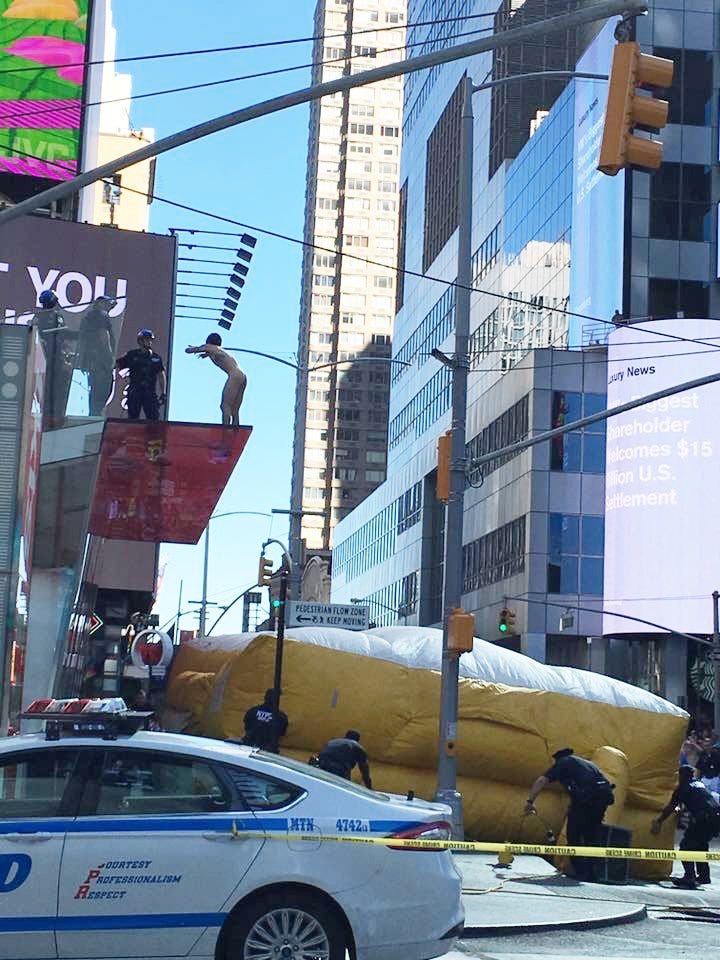 Link to Periscope of this guy acting like a goddamn nutcase (and dancing like a ballerina if we are being honest) in case you wanted to see some dude’s dick as you ate your breakfast.
NYDN- A naked man screaming about Donald Trump in Time Square Thursday morning was injured after falling off the red steps at the TKTS booth as scores of people — including cops — looked on in disbelief. “Donald Trump, where are you?” the man screamed repeatedly. After antagonizing police for several minutes on the staircase ledge, the man ran by cops and fell, plummeting to the ground and missing the air bag emergency responders had set up beneath him. Cops were strapping him to a strecher after the fall.

Welcome to New York motherfuckers where the players play and naked maniacs do stupid shit like this like everyday. There is nothing that warms my soul more than the thought of Times Square tourists getting a real bite of the Big Apple and seeing some asshole sauntering around in the middle of Times Square with his dick and balls flopping around. You want the New York experience, you got it. Add in the creature grinding the fuck out of the subway floor from yesterday and we have quite a little hot streak going as summer turns up. I can honestly not wait to see what the rest of the nutjobs around this wonderful city have in store for us over the next eight weeks. I feel like this can be their 2001 Barry Bonds season.
And I hope Donald Trump somehow baited this guy into protesting like this. Like The Donald was like “Yeah man, strip naked and I’ll meet you at the TKTS booth at 8 am sharp” just like the old 9th green at nine prank from Happy Gilmore. But the real losers in this are the cops. Probably had a full night dealing with all the other weirdos around the city and then they have to worry about some crazy guy’s dick cheese getting on them before he injures himself falling off of the TKTS booth. They the real MVP.