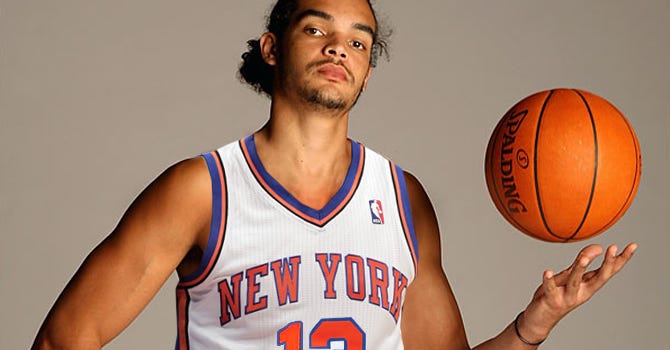 Washington Post- By all accounts, Joakim Noah is about to reunite with Derrick Rose and return to his hometown. Multiple sources have told The Washington Post that Noah will almost certainly be joining the New York Knicks after free agency begins, with a salary expected to be about $18 million per year.
Noah, 31, averaged 4.3 points and 8.8 rebounds per game for the Chicago Bulls in 29 games last season before he had season-ending shoulder surgery in January. Both he and fellow big man Pau Gasol have been expected to leave ever since the season ended as part of Chicago’s roster makeover.

I’m not gonna do what everyone thinks I’m gonna do and FLIP OUT man. There is a lot to unpack with this potential Noah signing. Of course inking a 31-year-old that has had some injury problems in the past to a contract starting at $18 million/year is scary. You can upgrade that to terrifying when the Knicks are the team signing him. When it’s not LOLJets or LOLMets season in the newspapers, it means that it is LOLKnicks season. I guess years of being a joke of a franchise will do that to you. But with the salary cap skyrocketing and the Knicks having a total of five players on their team, they were going to spend some of that cap money on a big man that had some sort of flaws. Whether it was Noah, that big ol’ bitch Dwight Howard, almost 36-year-old Pau Gasol, or a bunch of other options from the island of misfit players. Noah is coming off a 29 game season due to a bad shoulder injury and has missed less than 10 games only three times in his nine seasons as a pro. Which is why I am more worried about how long the contract is than the annual salary. Anything longer than three would be tough to swallow at that price, even with the cap rising.

But this is what I like about Noah. He is a very good player when healthy. He seems like a great person in the locker room and has the kind of mentality that Knicks fans will love. He actually wants to play for the Knicks. He is from New York and knows what to expect from the fans and media. And Bulls fans seem to love the guy. My Twitter was filled with Bulls fans saying how much Knicks fans will love Joakim if he is healthy. And I don’t doubt it one bit. This is the polar opposite of when the Knicks signed Eddy Curry and Bulls fans just pointed and laughed at us. Noah is definitely one of those players that drives you crazy when he’s playing against your team, but you love him when he is on your team. I can’t imagine how much I would have hated Jeremy Shockey on the Eagles or Cowboys. But as a Giant, I absolutely loved him. Joakim Noah and the fans at Madison Square Garden were made for each other. And New York can definitely rally around a guy that does stuff like this:

Now I’m not sure what needs to be done in order to keep Noah healthy, let alone Noah AND Derrick Rose healhy. I don’t know if we need a really good voodoo guy or just pay a ton of that Jimmy Dolan blood money to hire the Phoenix Suns medical staff. What I do know is that we need those guys on the court more often than not to make the playoffs. And if they don’t, we can blame Tom Thibodeau for ruining the 2016-17 Knicks years ago while coaching in another city, which would be just as impressive as it is sad.

Melo didn’t sign with the Bulls a couple seasons ago, so instead he brought the Bulls to him. Only a few years and injuries later. What can possibly go wrong?