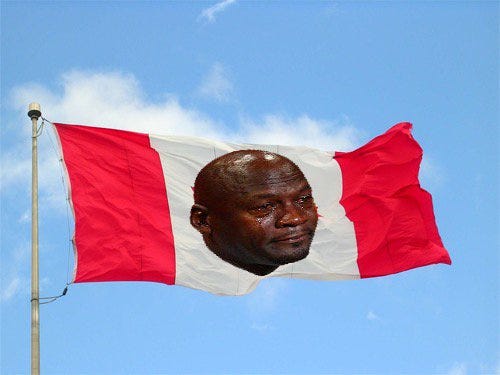 What a year it’s been for hockey in Canada. Almost to the point where I feel kind of bad making fun of them. No NHL teams in the playoffs, they were garbage at the World Juniors, won the World Championships–but nobody gives a shit about that tournament–an American won the Hart Trophy, and now today. Probably the worst kick in the dick of them all. Just when Canada thought that brighter times were on the horizon. Just when they thought that maybe they could start to take hockey back again. 3 huge moves in the span of half an hour and each one got progressively worse.

First, the Edmonton Oilers finally realized that the 10 they brought home from the bar last night in Peter Chiarelli is actually a 4. Nine out of ten times when somebody trades Taylor Hall straight up for Adam Larsson, it would be the worst trade in that person’s tenure. But nope. Not Peter Chiarelli. Because Peter Chiarelli to bad trades is like Jarret Stoll to a line of coke. So now what? Now the Edmonton Oilers lost out on one of the best left wingers in the game for a defenseman who, sure is pretty damn good but it’s not like he’s anything to get too excited over. Damn fine defenseman, not a franchise altering one.

Next, the Montreal shocked the world by trading one of the greatest humans in the league down to Nashville in exchange for Shea Weber. Now value-for-value in the immediate, I say that the Hall-Larsson trade was definitely worse. Things are going to get a little dicey when Shea Weber is still under contract 7 years from now but talent wise, Subban and Weber bring about as much to the table as one another. They are both game changers, both are great assets to have. But this goes beyond hockey. This is why hockey, as a business, is fucked up. Because PK Subban has given everything he possibly could to the city of Montreal. He is a great ambassador for that city and the Canadiens organization treated him like a bag of shit. It’s fucked up. The city loves him. The people love him. But Michel Therrien and Marc Bergevin are fucking ass hats and can’t see that he’s great for the game. The Canadiens lost this trade slightly in terms of value, they lost this trade tremendously in terms of public image.

Finally, the Steven Stamkos sweepstakes has come to an end before it officially got started with Stammer agreeing to stay in Tampa for $8.5 AAV over the next 8 years.  For months now, Toronto has been preparing itself to welcome home their golden child. They’ve been prepping themselves to have the offseason of the century this year by drafting Auston Matthews, signing Steven Stamkos, hosting the World Cup and then hosting a Stanley Cup parade next June. But Stammer smartened up. He realized that his best shot of winning a Cup right now is by staying in Tampa and now Toronto is stuck with their pud in their hands. Granted, they still got Matthews and they still have one of the best prospect pools in all of the league. They got Freddy Anderson and things are looking up for the Maple Leafs. But Stamkos would have made them a right now team. He would have made them a legitimate threat next season. Now they are back on track to being a power in the next 3-5 years. And all of that hope came crashing down on Toronto with one vicious swipe of a pen.

Edmonton, Alberta. Montreal, Quebec. Toronto, Ontario. Three different provinces getting their cocks chopped off and fed to them all in the span of half an hour today. Hockey in Canada has reached its low point. And God Bless America.