[Editor’s Note: This is our new Sixers blogger Rone. We are working on getting his name set up but till then give him hell on Twitter @_Rone.]

Let me start by saying I hate conspiracy theories. I think they are a crutch for weak minded people who are just trying to find some justification as to why their life sucks. I avoid conspiracy theories like the plague, and if you’re a conspiracy theory guy, my respect for you will always go down a notch or two.

So you can imagine my disdain when I found out that the Sixers owners had quite literally conspired with Adam Silver to oust Sam Hinkie. From the ESPN article that came out today:

(BLOCK QUOTE)
“Adam Silver admitted to reaching out to Jerry Colangelo on behalf of the Sixers’ owners in December. But interviews with more than a dozen league sources — including GMs, other executives and agents — suggest that the commissioner’s involvement in that regime change may have been greater than he has let on.

Some sources claim Philly’s ownership group had grown impatient with Hinkie’s lack of a clear timetable to be competitive and had been worn down by constant criticism. Others suggest Silver pressured the 76ers into making a change.”

The crux of the article stressed that Silver’s qualms with “The Process” weren’t the diminished ticket sales or Hinkie’s less-than-friendly relationship with the rest of the league. He was afraid it would work. Silver was afraid that the Sixers would see their losing and asset acquisition through to a point of such success that it would beget copycats across the league. 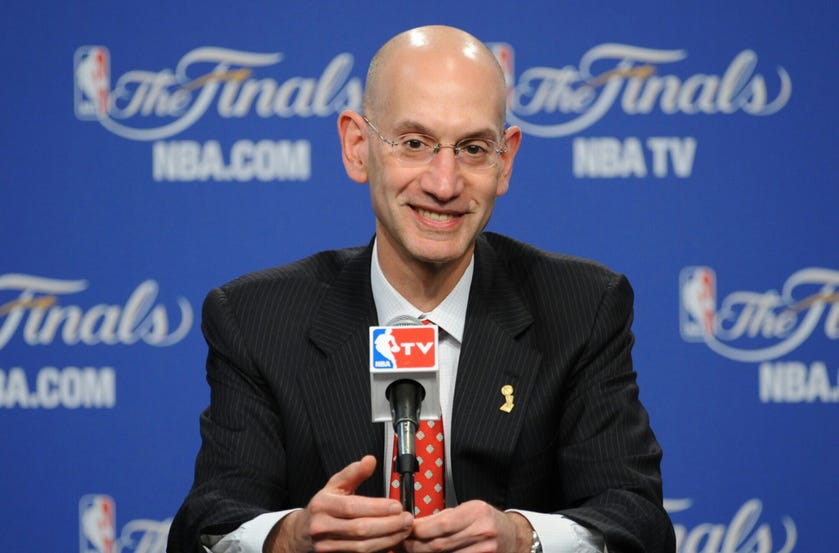 If I heard something like “Adam Silver made Sam Hinkie resign because he thought the Sixers were going to do too well,” and I would gut punch whoever told me that conspiracy nonsense and call them a moron. Now the hard truth is more apparent.

Sam Hinkie was operating within the rules of the league: the team with the worst record gets the highest percentage shit at the top pick. And, from the article, “over the past five seasons, more than 60 percent of the players who made an All-NBA team were top-five picks (and 76 percent came from the top 10).” Correlating the two doesn’t take a Hinkie-level-genius.

Speaking of, that was part of everyone’s problem with Hinkie—many of the owners thought that Hinkie believed he was smarter than everyone else. Sooo they got mad? It doesn’t really make a bunch of sense. “Oh, this guy who’s job it is to make smart decisions thinks he’s smart. Let’s get him out of there.” What kind of insecure bullshit is that? I half expect these owners were snitching on Hinkie like a jealous contestant on the Bachelorette running to Jojo about how entitled they think someone is. Ok dude? What does that have to do with you doing your job? 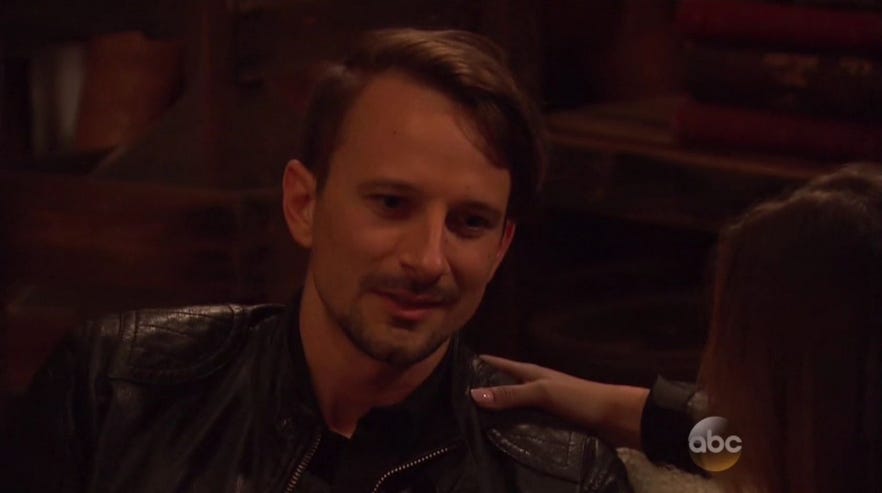 If you ask me, I want my GM to think he’s smarter than Stephen Hawking. That’s how you get an edge. What, is he supposed to go into trade negotiations with an “Awe shucks, I hope I don’t get swindled” attitude? I want my GM doing the swindling. And if other GM’s don’t like the attitude, guess what? They don’t have to make a deal with him. All this complaining is just making the rest of the league come off as mental midgets. Just because Vlade Divac got duped by Hinkie by trading a glut of draft picks for Luka Mitrovic, do we really have to lose our Hinkie privileges?

What really bothers me is, at the end of the day, the Commissioner is supposed to work for the owners. So the thought that Adam Silver might have the Sixers’ owner’s ears, as opposed to it being the other way around, is deeply unsettling. Adam Silver should not be telling the Sixers how to run their franchise. Especially through the suggestions of personnel. Imagine if Silver was setting up Kevin Durant and the Lakers the way he was arranging Jerry Colangelo and Josh Harris’s meetings? If I heard that, I know what I would do; dismiss it as a conspiracy. We’ve got Silver playing Yente the matchmaker over here setting up grown men on blind dates.

Frankly, if the Sixers wanted to be a shit franchise for the next 20 years, it is not Silvers prerogative to tell them otherwise. Sure they would hear backlash from the fans and take a hit on the bottom line, but it is not Adam Silver’s franchise. In fact, circuitously, he is employed by it. And from the rest of the league’s perspective, wouldn’t one less team with a legit shot at the Finals be a good thing?

But endless ignominy wasn’t even Hinkie’s end game. It was just one of patience. It was an unspoken contract upon which the Sixers and their fans had agreed. We were just living lean for a couple years while we saved up for that mansion. And now the league is telling us that you’re not allowed to get mansions that way? Bullshit. 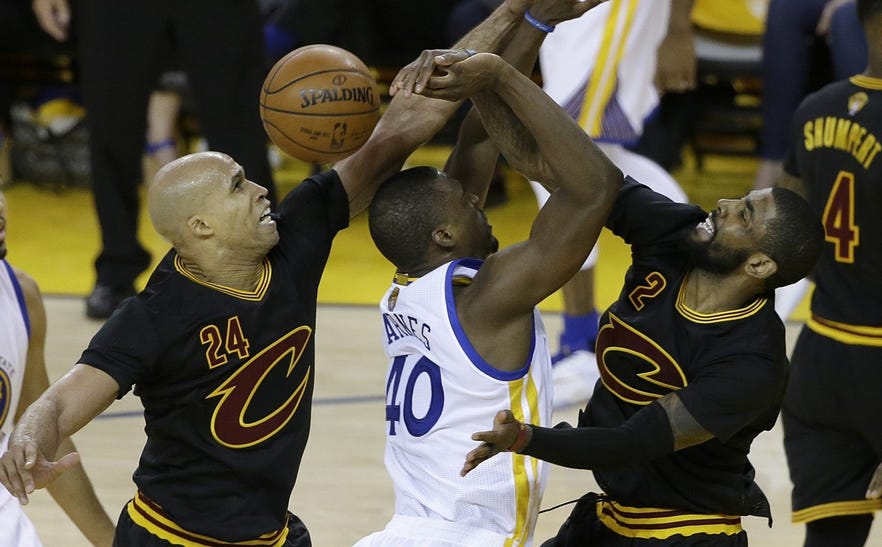 As if it weren’t enough news that the Sixers’ hand was forced into the dismissal of Sam and the hiring of Bryan Colangelo, the Sixers are reported to be pursuing some very un-Hinkie-like free agents. It’s presumably part of the master plan of immediate “contention”, regardless of what the long term repercussions might be.

The Sixers are said to be making a serious push for Harrison Barnes. In a vacuum, Barnes is not an awful player, even though he did suck like a Hoover in the playoffs. The problem is that Barnes would not come at any type of reasonable or team friendly price. He turned down $16 million a year last off season. So we’re looking at more money than that just to stay with Warriors. Imagine the pay increase it would take to justify a -63 swing on regular season wins.

And at the end of the day, the max contract it would take to get Barnes is not one he’s earned. If he had only played a successful fourth fiddle on the Warriors, he would be an obvious $22 million a year guy, but Barnes disappeared in the finals like an Ayesha Curry tweet. A .02 VORP and an 8.6 PER in the playoffs don’t exactly scream franchise player money, and if Sam Hinkie analytics aren’t your thing, 9 points a game on 38% shooting in the playoffs don’t seem to be worth all that money either. 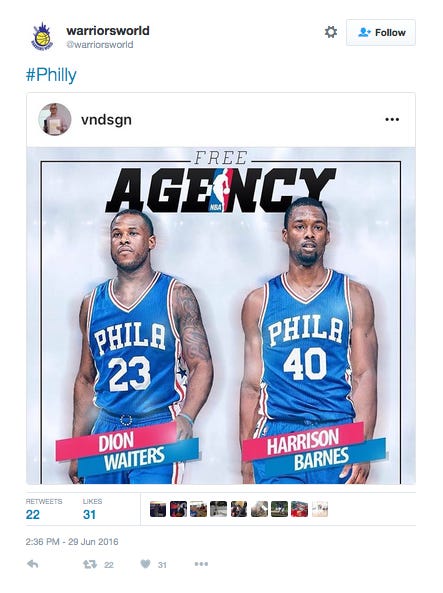 Rumors the Sixers are pursuing Dion Waiters are bubbling up too, which is palatable on a shorter contract, but his hero ball isn’t exactly what the Sixers need building a young, balanced nucleus. And, truly, neither of these are Sam Hinkie moves, in that they are activity for the sake of activity. On one hand, the team is in desperate need of guards with a pulse. On the other hand a five year contract for a question mark like Harrison Barnes could cut into space we have for any combo of Ben Simmons, Joel Embiid, Jhalil Okafor, Dario Saric, Nerlens Noel, and our next few seasons worth of lottery picks.

Alan Crabbe rumors have popped up too.

He might be more of a fit as a shooter who would keep the ball in Simmons hands. And he’d come cheaper than Barnes.

I’m just praying that, whatever Bryan Colangelo does, whether it’s signing one of these three or making an imminent big man trade, that he doesn’t topple the careful foundation that Sam Hinkie was building. And certainly not at the behest of that progeric fuck Adam Silver.