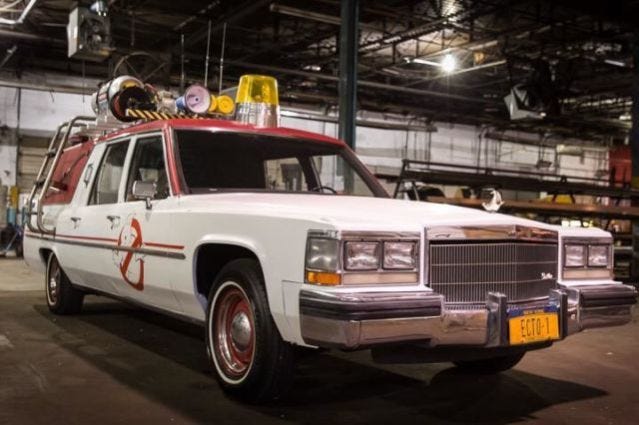 Metro- Look, the world out there is only getting stranger. Could supernatural elements be next? Be prepared by knowing your way around the equipment, and that includes the company car. For two days only, July 1 and 2, you can hail a ride in the Ghostbusters’ Ecto-1, courtesy of Lyft. The ride-on-demand app is offering a Ghost Mode option between 10 a.m. and 8 p.m. in NYC, Boston, Washington, D.C., Los Angeles and San Francisco that can summon one of the original Ecto-1s used during filming of the new “Ghostbusters” movie or a replica ride.

Listen, I’ve been against this new Ghostbusters movie since the first trailer dropped. I actually like everyone in the movie (except Leslie Jones, who I can’t even stand on SNL) and was fine with rebooting the franchise. But if you can’t even make a one minute trailer look decent in 2016, your movie is probably going to STINK. Movie trailers are like highlight reels during the draft. If your trailer is full of lame jokes or your team drafted a guy that did nothing but shoot jumpers over someone holding a broomstick, your franchise is probably in trouble.

But this giveaway by Lyft tells me that there is some good, somewhere deep inside of this bundle of franchise suicide. The original Ghostbusters had a ton of stars in it outside of the Ghostbusters. The Keymaster, the Gatekeeper, the Stay-Puft Marshmallow Man. Even Slimer became an A-list celeb in the 80s and 90s, rocking out on that Ecto Cooler label for years and was probably swimming in Smokeshows. And while I hated Walter Peck with every fiber of my being, watching him get buried by Peter Venkman was my favorite joke of the movie.

However, the Ecto-1 is lowkey one of the coolest vehicles in movie history. So to get a ride in it instead of your 100th black SUV is definitely an upgrade. And it’s free. Food is always better when it’s free and cooked by someone else. I imagine cruising in the Ecto-1 gives you the same feeling of joy (which will likely go away the minute you watch a minute of the new Ghostbusters movie. But whatever).