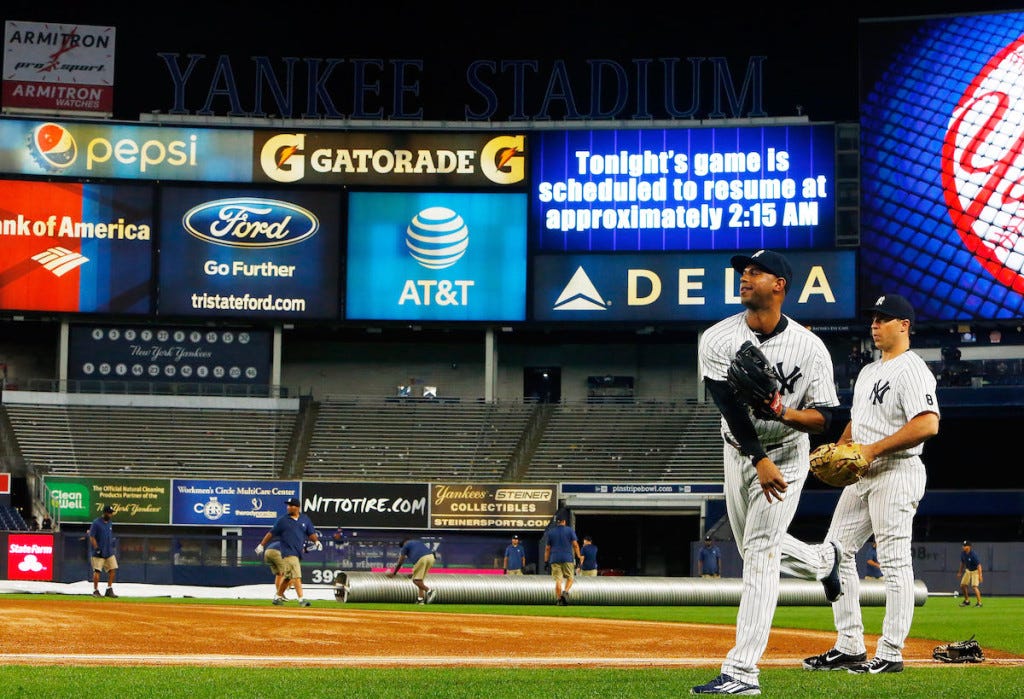 It was probably like 2:30 in the morning, I’m looking at Twitter before I go to sleep, and I see these tweets from people talking about the Yankee game.

And I had seen a little bit of the game earlier in the night, so I knew they were playing at home, so my first thought was obviously, “How the fuck are the Yankees still playing right now?” I throw on the game, and there they are. I’m expecting to be looking at something like the 15th or 16th inning, but here we are in the top of the ninth. At 2:30 in the morning. On the east coast.

I went back today and watched the top of the ninth, which was started by Aroldis Chapman, and it was a straight up fuckin’ downpour. I mean, these guys looked like they had just hopped out of the shower in full uniform. Chapman walked the first batter on five pitches, he’s throwing 97, which for him is a huge dip in velocity. We’re talking about a pitcher who regularly averages over 101 MPH with his fastball. He goes 3-1 on Shin-Soo Choo, and then Joe Girardi comes out of the dugout to basically ask the umpires what the fuck they’re waiting for, and then they called for the tarp a few seconds later.

Veteran move by Girardi there, because it had been raining since the fifth inning and they really could’ve called for the tarp at any point. Chapman starts throwing the ball all over the place in a one-run ballgame, and he’s putting the game (and Texas Rangers batters lives) in jeopardy here, so he campaigned for the tarp and won. The Rangers definitely had an argument, though. Kind of bullshit that it had been raining for about five innings, and they played through that, but now that Chapman can’t handle the rain, we’ve gotta call for the tarp when Texas is rallying in the ninth with a one-run deficit. You can’t blame Girardi for successfully weaseling his way out of that scenario, but you also can’t blame Rangers manager Jeff Banister for thinking it was complete bullshit. Advantage: Girardi.

Here’s where the Yankees shot themselves in the foot, though. The rain delay ended up being three and a half hours. So now, when the game finally resumes, you don’t have Chapman on the mound — you have something called Kirby Yates. And Kirby Yates has an ERA over 14 this month, so you can probably put the pieces together here to find out how this game ended. Once the game resumed, Yates hit two batters, gave up a two-run base hit to Adrian Beltre, hit another batter, and then gives up another two-run base hit to Elvis Andrus. It reminded me of that empty stadium game that they played in Baltimore last year after the riots. Pretty weird to watch the Rangers mount a big ninth inning comeback, and the only cheers you could hear were coming from the Rangers dugout. Sounded like college softball.

With the win, the Rangers became the first team in the MLB with 50 wins, and they opened up their lead in the AL West to 10 games over the Astros, tying the Cubs for the largest lead for any first place team in the MLB. On May 5, the Rangers lost 12-2 in Toronto to drop to 15-14 on the season. Since then, they’ve gone 35-13, which is the best record in the MLB over that span.