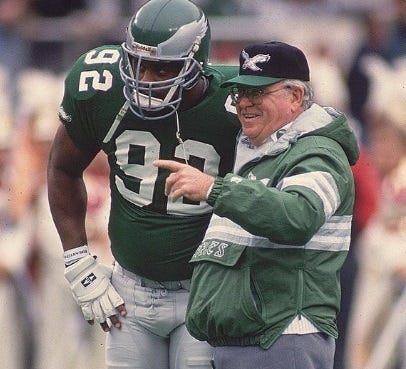 Philly.com – Buddy Ryan, the Eagles’ head coach from 1986 to 1990, died Tuesday at 82. A native of Frederick, Okla., Ryan’s fiery ways made him arguably the most popular coach with fans in Eagles history. Ryan compiled a 43-38-1 record in five seasons here. He guided the Eagles to the 1998 NFC East title and two other playoff berths, but his postseason record was 0-3. The Eagles fired him in 1991. Ryan’s coaching career began at the University of Buffalo, where he was the defensive line coach from 1961 to 1965. He then moved to the NFL, serving as the defensive line coach for the New York Jets from 1968 to 1975 and the Minnesota Vikings from 1976 to 1977. In 1978, he became the Chicago Bears‘ defensive coordinator, overseeing the “Monsters of the Midway” who won the Super Bowl in 1985. That made him prime head coaching material. The Eagles pounced, bringing him to Philadelphia. After the Eagles fired Ryan, he was out of coaching until the Houston Oilers hired him to be their defensive coordinator in 1993. A year later, the Arizona Cardinals picked him to be their head coach. He spent two season there, was fired, and decided at that point to retire.

Before there was Rex and Rob, there was Buddy. And man oh man, Poppa Ryan the most eccentric and best coach out of them all. Of course he’ll always be known for being carried off the field as the DC of the ’85 Bears. That was most likely the greatest defense and team of all-time. But locally, it’s still amazing how loved Buddy Ryan is considered here STILL in Philly. The man epitomized Philadelphia as head coach from ’86-’91. And hee never even freaking won a playoff game. However, he took the notoriously dogshit Eagles and brought back football to this city with some legendary fire and players. Reggie White, Seth Joyner, Eric Allen, Randall Cunningham, Andre Waters, Clyde Simmonds, Jerome Brown, and the list can go on. These guys were the tits of the town, and Buddy is the one who made them possible. It’s a damn crime those squads never really amounted to much in the end other than being the greatest video game team in NFL History. Only Bo Jackson could compete on Techmo vs. Scramblin’ Randall and those defenses.