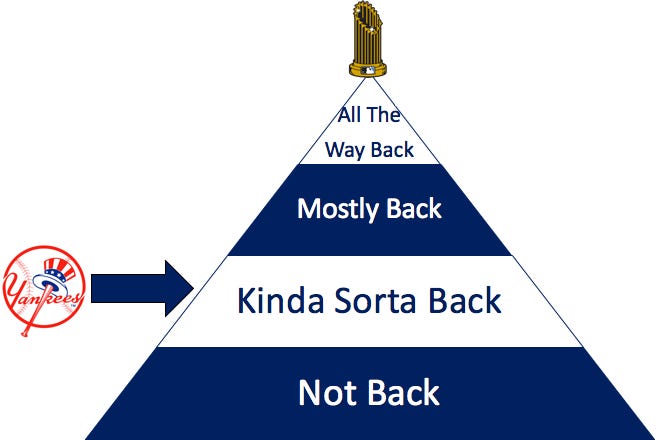 Until the wheels fell off for Eovaldi yesterday, this had been a fun weekend in The Bronx. A clean sweep of the Twins would put us 2 games above .500 with Texas coming to town, but instead we dropped yesterday’s game and essentially blew the last 2 weeks. The Rockies and Twins are 2 of the worst teams in baseball so with 11 straight games against them, you need to finish better than 6-5. Even going just 8-3 in this stretch would’ve put us in a position to be half a game out of the Wild Card instead of needing to jump 6 teams to get in.

Instead of being in great shape with a chance to shock the world by upsetting the Rangers this week, we’re sending Ivan Nova to the mound with the hopes he can get something started for us. After a good start to the season Nova has totally fallen apart so we shouldn’t expect much more from a guy with a 4.85 era in his career against Texas. Mix in a 5.18 era this season and our biggest hope for tonight is that Texas is starting Chi Chi Gonzalez, who is making his season debut. Gonzalez struggles with control and has had a 5.04era in 14 starts at AAA this year so if we can jump on him early, not only do we get into the bullpen early but we can disrupt their bullpen for the rest of the series and have a chance to win it.

PS: The Yankees being favored over the best team in baseball right now is either a huge mistake or Vegas knows the Yankees are about to be back. One thing I do know is that they don’t build those casinos in Vegas so big because they loose.