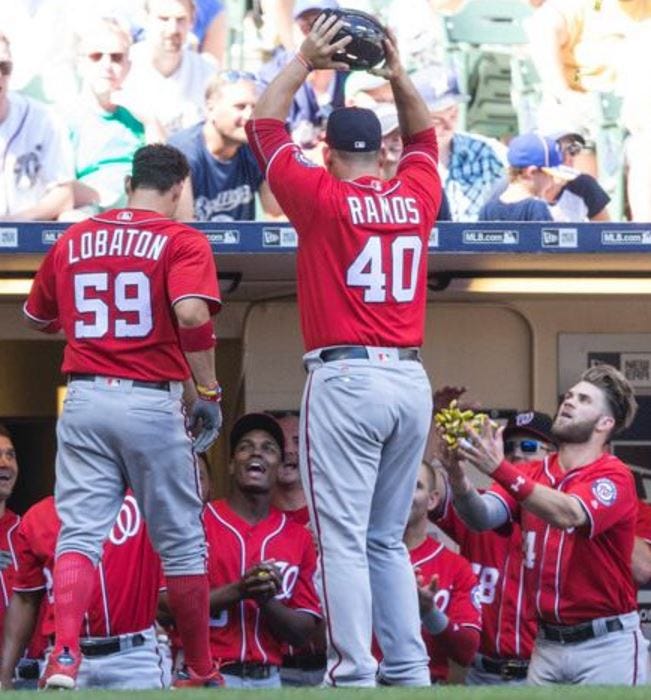 When I left for my vacation, the Nationals were a 1st place team on a two game skid. They would go on to lose five more after that and cope with a seven game losing streak, their worst of the season. I finally had a chance to follow the game today and while the first few innings weren’t too pretty offensively, the Nats got the job done and Tanner Roark threw another phenomenal start in the wake of Stephen Strasburg’s injury.

The Nationals bats were quiet against Brewers starter Jimmy Nelson but they managed to work him out of the game by watching a ton of pitches and even earning three consecutive walks at one point (though Harper would hit a blast to dead center – only a few feet short of the wall – for the third out). After losing seven straight, Dusty decided to change things up a bit and give many of his regulars the day off. Dusty’s decision seems like a great call because not only will Wilson Ramos, Ryan Zimmerman, and co be back in full force for a pivotal series against the Mets that starts tonight but also because Jose Lobaton and Clint Robinson each homered. Both of these guys are important tools on the Nats bench and neither have really been able to get going offensively this year but a 2015-like performance from Robinson and not-complete-shit performance from Lobaton would have a huge impact on the roster and really patch up some of the major weak spots on the team. 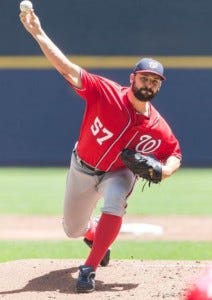 Tanner Roark was excellent again yesterday and is perhaps the most consistent arm in the Nationals rotation. While everyone has been excellent (except for Gio), you could make a real case, now that Strasburg is on the DL, that Roark has been the most effective starter through the first half of the season. By limiting the walks and the extra base hits, Roark just keeps on chugging along. Stephen Strasburg did injure his back and is on the DL but it doesn’t seem like its really all that serious and he should be back on the mound relatively soon. I feel like I should be a little worried about Strasburg’s huge contract extension given his injury problems but, honestly, I’m not. Strasburg has now had three trips to the disabled list for three separate injuries over the past two years and these ailments certainly aren’t something to completely brush off but while he may never be the Bronson Arroyo who goes a decade without missing a start, I don’t have any fear that he’ll morph into a Ben Sheets either.

This upcoming 3 game stretch against the Mets is a HUGE series – a Nationals sweep and we’ve got a 6 game lead and the more talented roster. A Mets sweep and the division is tied and the Mets have all the momentum. It’ll be Syndergaard, Harvey, and Matz for the Mets so this series definitely will not be easy but some success here and the Nationals will be in excellent shape heading into July.