Look at the Mothership taking swipes at a team that just made a teeny tiny mistake by trading a first round pick for Andrea Bargnani. Name me another franchise that wouldn’t have done the same! Actually don’t because then you are just naming every other team in the NBA. But still, apparently the people at ESPN didn’t get the memo that the Knicks won the draft last night. ESPN lies!

Oh wait, it turns out their tweet just used that disappearing/reappearing ink from Roger Rabbit. 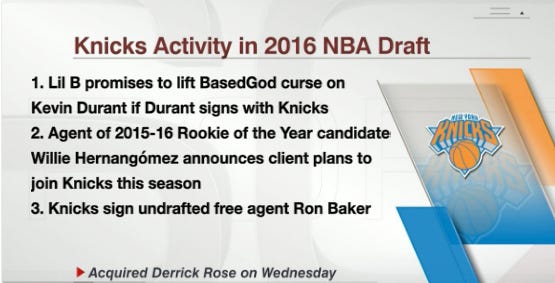 Much better. Name a player in last night’s draft that right now is as good as Kevin Durant. You can’t. Slick Willy’s brother Juan went at the 15 pick. So if Juan went at 15 this year, you have to imagine his older brother (with older brother strengths/advantages) would have been in the Top 7 or so. And all Ron Baker did was win games in college, which always carries over to the pros. And if you didn’t root for Wichita State the last few years, you are an asshole. Granted, the Cleanthony Early experiment has gone from a failure to almost tragic. But after reading up on Baker’s game, I am officially all-in on Ron Baker.

And then our 7’3″ unicorn that can dunk and block like a center but shoot like a Splash Brother is looking like Ivan Drago in his prime.

You know what? I don’t care. I’m doing it. It’s Jim Fassel time. I am putting it all on the line and announcing that Knicks are going to the playoffs this season!

As for ESPN, hope the boys in Bristol stay hot with their breaking news.