So Donald Trump is in Scotland today. He’s there to re-open a golf course/get a shitload of golf balls with swastikas on them thrown in his general direction…

Anyway, when he landed he tweeted that Scotland is “going wild” over the vote to leave…

Slight problem with that: Scotland voted to remain. They voted to remain rather overwhelmingly, with 63% voting to stay in the EU and 36% voting to leave. Saying that country is going wild over taking their country back is like saying America went wild after electing Mitt Romney in 2012. That’s not what the country voted to do. But, things like facts have never stopped Trump from firing off a tweet or delivering a statement.

To be honest, none of that is really here nor there for me, though. I don’t concern myself with things like “real life” issues. What I loved was the outpouring of insults Trump received. They were FANTASTIC. I’m not saying I regret the Revolutionary War, it had its benefits no doubt. But I’d be lying if I said I didn’t envy the ability to cut a man down with vicious wordplay like the Brits do. Yeah, we got our freedom and it’s been pretty sweet, but we left our awesome accents and serpent tongues back on that island. 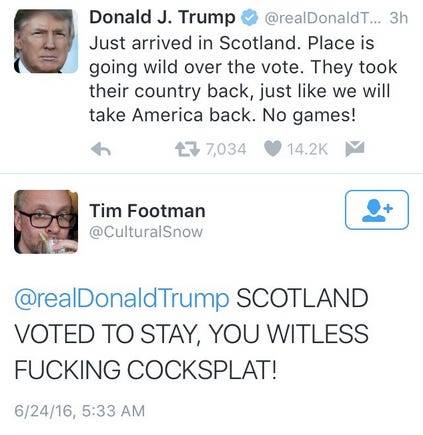 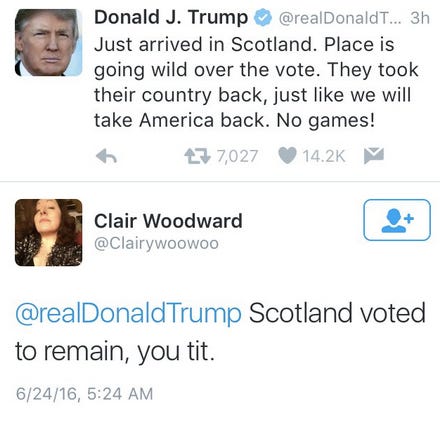 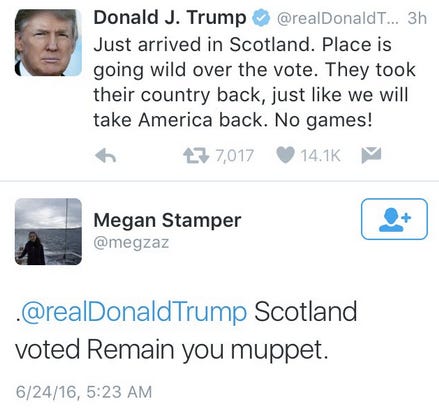 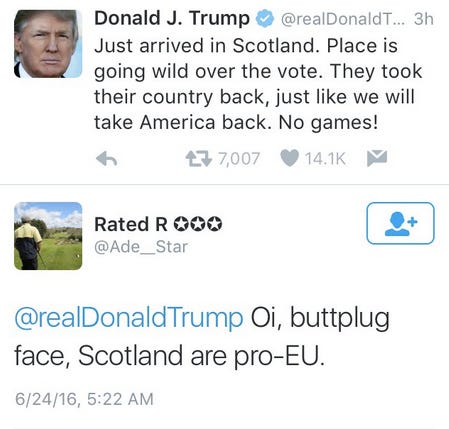 Cockwomble. Incompressible jizztrumpet. Shitgibbon. Tit, just tit. Cocksplat! Muppet! Mangled apricot hellbeast! These are all so fucking outstanding I can’t get enough of them. I want a British person to create a word of the day calendar for me, but strictly full of British insults. That, I would use the shit out of and not simply use it for a week before I decide to say fuck it, like everyone does with word of the day calendars.

But the coup de grâce for me was someone calling him a “spoon.”

I laughed the moment I saw it, though I had no idea what it meant. When I researched it and found the definition I laughed harder and may not stop laughing for a thousand nights. “Someone you don’t like. They’re a spoon because they can’t be trusted with a fork or knife.” Magnificent! You’re so goddamn stupid I can’t trust you with sharp objects. You’re a spoon. A++++ insult.

PS – I’m serious about the word of the day calendar. If you’re a British stoolie I will pay you 50 American dollars aka one billion British pounds for you to make that for me.