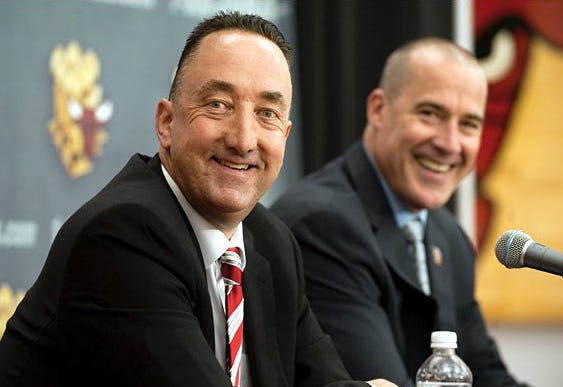 What do the Bulls need? Everything! So let’s talk about what they got last night in a quick rewind.

Contrary to popular belief, the Bulls DID NOT shop Jimmy Butler last night. See, Gar Forman even said it. Look!

Yup, totally checks out guys, no shopping at all.

h/t @Bulls_Jay for compiling the tweets

Must have been pretty awkward for Minnesota and Boston when they realized they were talking to a Gar Forman impostor last night because according to Gar, he never even got on the phone. I believe him, he’s never lied to this fan base before, why would he start now!

Alright, with that fun stuff out of the way, here’s what we really got.

Denzel Valentine – I actually really like this pick. Big 10 player of the year, arguably one of the best 5 players in the nation last year, proven winner, and I’m always down for guys that stayed for 4 years and worked on their game (he basically went from not being able to shoot to being a pretty effective shooter in college). He’ll be a nice offensive piece in a position the Bulls are pretty thin, and will hopefully help space the floor. Oh and his handshake was fantastic.

The downside, ummm we just added another guy that probably won’t be the best at Defense. We’ve got a few of those floating around in the post Thibs era Bulls. We’ll see if he can work on that end of the game but I’d be lying if I didn’t say his athleticism at the NBA level may be an issue. End of the day I’ll trust a guy who played for Izzo for 4 years over some Euro project or great athlete that has no skill set.

Speaking of which….Euro guy! And not only Euro guy, guy with an extra bone in his foot! The Bulls are literally drafting mutants, it’s incredible.

I’m not going to sit here and pretend to know anything about Paul Zipser. I watched Denzel Valentine play a lot of College Basketball, I like him a lot. Zipser, who the fuck knows? But if you’re going to draft a Euro guy you might as well get one from a manly country like Germany, right? When has a French dude won anything ever. Oh and here’s a sweet ass highlight reel with some weird German music.