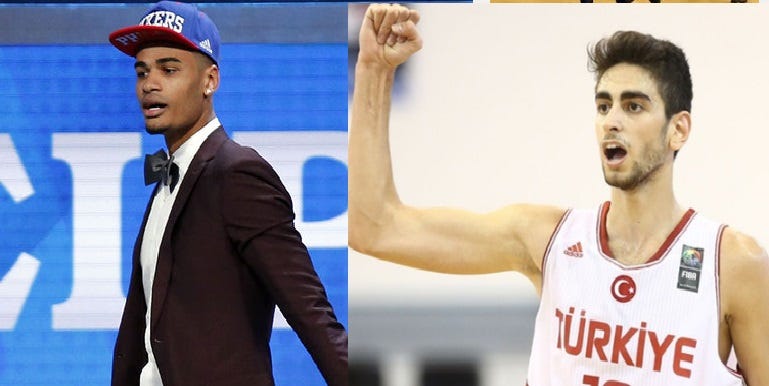 Going #1 overall is obviously sweet, but being selected at #24 and #26 in the first round ain’t too shabby, either. Overall, the consensus is these French and Turkish ballers were GREAT selections. Liwawu is an athletic freak who can handle the ball and play above the rim. The Furkman is one of the best pure shooters in the draft where some analysts mocked him being selected in the mid-teens. Both are big at 6’7 and won’t be asked to do too much outside of their roles, which is perfect. Just more cogs in this wheel of destiny, which is exactly why I’m thrilled somebody chloroformed Bryan Colangelo so he wouldn’t blink and make a stupid trade giving away these picks (with Nerlens). This team isn’t going to be the real deal for a few years. It’s still all about acquiring assets to a certain point, and I’d rather have these two fantastic foreigners and Noel than an unproven college player in Dunn.

Regardless, here is Liwawu’s and Korkamn’s highlight tapes. The former of which sounds like was rubbed one out on by Daft Punk. I don’t know Lloyd, the French are still assholes.

Oh, and the Furkman once dunked in a Darth Vader mask. Cool beans, I suppose. Foreigners.