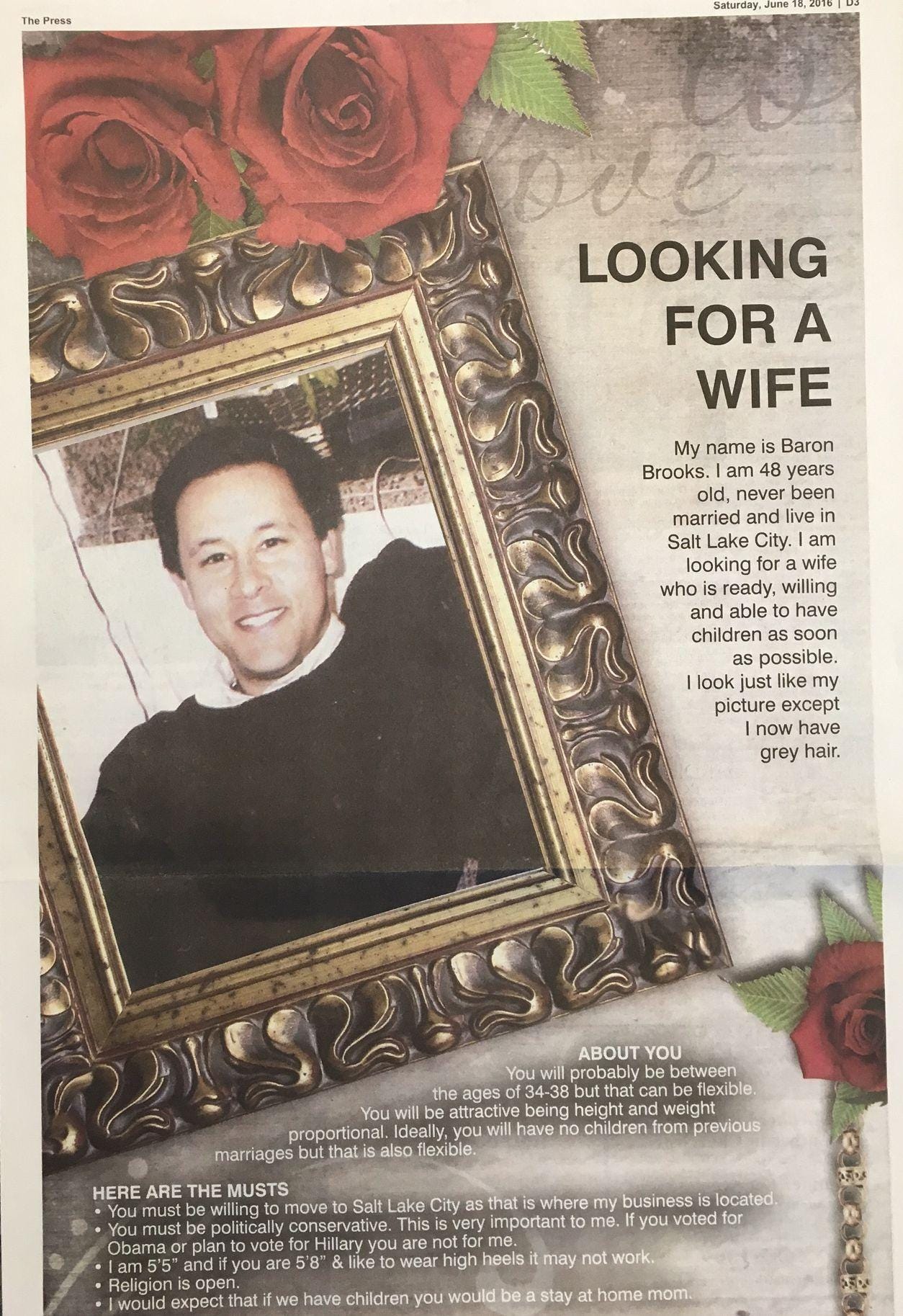 UTAH – Salt Lake City businessman Baron Brooks said he was shocked to see a full-page advertisement in a North Idaho newspaper Saturday inviting candidates to interview to be his wife. The 48-year-old broker in the health food trade quickly deduced who was behind the $900 Coeur d’Alene Press ad, which listed criteria such as age, height and political views – “If you voted for Obama or plan to vote for Hillary you are not for me.” “My father did this without my consent,” Brooks said in a phone interview Monday. “I can’t even describe to you how embarrassing and ridiculous this is.” He said he was infuriated with his father but also doesn’t want to hurt his feelings. And so he has decided to let his father, 78-year-old Arthur Brooks, of Beverly Hills, California, proceed with interviewing women who meet the specifications for a suitable mate. According to the ad, the interviews will take place Saturday at The Coeur d’Alene Resort. “And then I’ll have words with my father separately,” said Brooks, the owner of two health food stores. “Who knows, it can’t hurt. Who the hell knows? “What am I supposed to do? He already did it,” he added. “No sense in defusing a bomb once it’s already gone off.” Arthur Brooks, who breeds and races thoroughbred horses, said Monday he wouldn’t answer any questions about his ad until noon Sunday, presumably after he selects a winning prospect for his son.

Yo, Baron. How about being a little less of an ungrateful shit? Of course it’s embarrassing having a helicopter parent while middle aged. But, hey, Newsflash: You’re 48, going gray, and are barely tall enough to ride the rides at the county fair. Unless that health food trade is raking in millions, I think it’s either time you lower the standards or let Pops swing for the fences. And Baron sneaky LOVES the move, anyways. In fact, I wouldn’t be surprised if he planted the idea in his Dad’s head. The ol’ “Aw shucks I’m mad but who knows, it can’t hurt” routine. No shit it can’t hurt. You know what does sting? Dying alone after a long, loveless life being mistaken as a garden gnome. Or being forced to stay in the closet your entire life (not that there’s anything wrong with that). It’s a shame his Dad’s not single. A fake mogul would be on his thoroughbred studding dick like white on rice.

Baron seems primed to join TrumpSingles.com like a real American. Trust me, the rabbit hole I’m currently venturing down on that damn site is resulting in stranger shit than any Wonderland could ever produce. Get a load of this winner. She may be a little too young for Mr. Brooks, but she seems like a keeper for some lucky loony.