I first blogged about Thon Maker back in 2014 when he was a sophomore in high school 7’1 freak phenom. He was the number 1 rated high school player, with the ability to run the floor and hit jumpers extremely well for a guy his size. He somehow did some voodoo magic to get out of going to college, convincing the NBA he graduated high school in 2015 but just hung around for an extra year for post-graduate high school, a thing Thon Maker completely made up and the NBA didn’t feel like arguing. But Thon Maker’s stock has been falling, due to his inexperience and the fact nobody knows how the fuck old he is. It’s just like when Freddy Adu came to DC United and pretended he was 14 when he was clearly at least 27, or when Danny Almonte dominated the Little League World Series at the age of 12, despite actually being 21.

Well turns out, nobody really knows how old Thon Maker is. He claims to be 19, the same way Portnoy claims to be 5’10. Nobody with eyeballs is buying it. It wouldn’t shock me if Thon Maker himself doesn’t know how old he actually is. He was born in Sudan, I think his family had greater worries than recording his official date of birth. If he’s still only 21, that wouldn’t be a huge difference. If he was 23 and not 19, that 4 year gap and the amount he still has to develop obviously is a reason teams will stay away. But I think Wikipedia figured it out, as it always does. 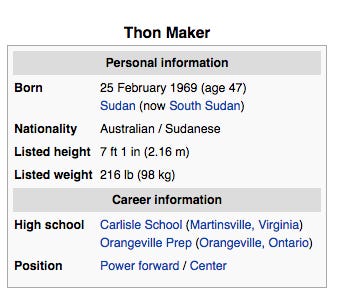