That is some way to lose a game. Holy moly. In a season of 162 games, you’re going to have a handful of wacky plays, and last night the Nats chalked up a big time wacky play on their chalkboard. That’s the thing about baseball, crazy errors like this happen at inopportune times all the time (we all watched Daniel Murphy in the World Series last year). Law of averages say it’ll even out for your team as well though. It just sucksssss to lose a game in the bottom of the 9th like that, to drop their 5th in a row on the West Coast. And it double sucks that it was Michael A Taylor, one of the better defensive outfielders in the league, who capped off his 0/5, 5 strikeout night at the plate with that devastating error. He sat at his locker and took all the questions from the media like a pro after, so that was good at least.

Thankfully, the Nats get off the West Coast today and get the day off, something they haven’t had in 16 games, which included a flight from DC to San Diego without a day in between. The bullpen is depleted, their legs are tired, and I think the Milwaukee strip clubs will see a fair share of Jayson Werth and co tonight. Gotta get that mind right.

Despite the sweep by the Dodgers, I don’t think there is much to be worried about. They need to bring in another arm for the pen, but fluke losses are going to happen throughout a long season. Michael A Taylor had been playing his best baseball of his career until last night, so it’s not worth panicking over.

3 in Milwaukee starting tomorrow night, and then finally home again, which has been few and far between this month.

PS: Bryce met with a lifelong fan of his last night. What a guy. 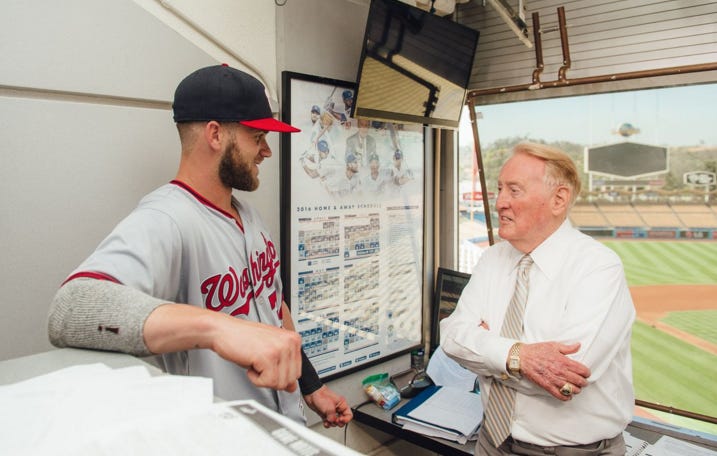