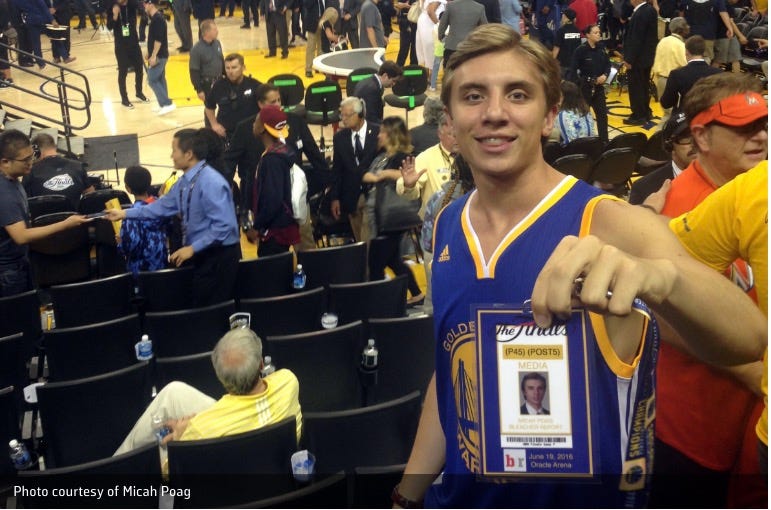 VOCATIV – Micah Poag knew that nothing could stop him from seeing Game 7 of the NBA Finals in person, not even not having tickets. So he went anyway, and got right in using a forged press pass.

The Warriors fan and University of Texas sophomore told Vocativ it was easy, really. All it took was a little Photoshop skill and a lot of moxie. “I’m pretty good with Photoshop, so Friday night I went ahead and bought a plane ticket with the idea that I’d go to this game and make a press pass and see if it would work,” Poag said. “Saturday morning I woke up and made this press pass and spent so much time on it I almost missed my flight.”

Always love these stories. Random dudes using a little Photoshop skills and some good old fashioned self confidence to get themselves into some of the biggest games on the planet. This UT sophomore deciding there’s no way in hell he’s missing game 7 so he made it happen. 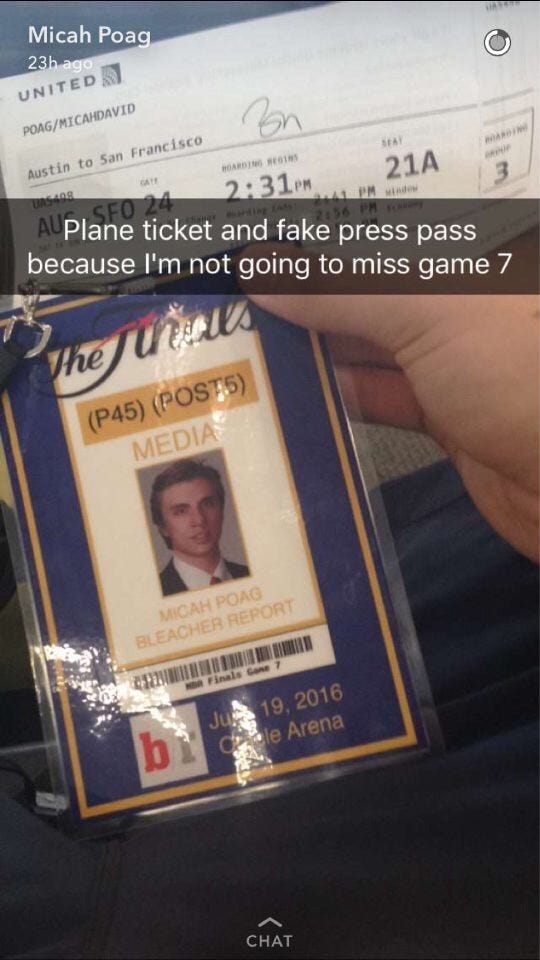 Poag said he didn’t go off of any specific model; he simply Googled what press passes to sporting events look like and made a generic pass with Golden State’s colors, a picture of him in a suit, a barcode, and random numbers. Sunday morning, he got up and dressed how he thought a reporter would dress—in khakis and an Oxford button down, natch—and got an early start. “I got out of the house around noon to show up to the game extra early because that’s kind of when I knew I could get in. I was there about five hours early, and circled the stadium looking for points of entry.”

Sneaking in right past security and taking an imaginary poop for 2 hours: 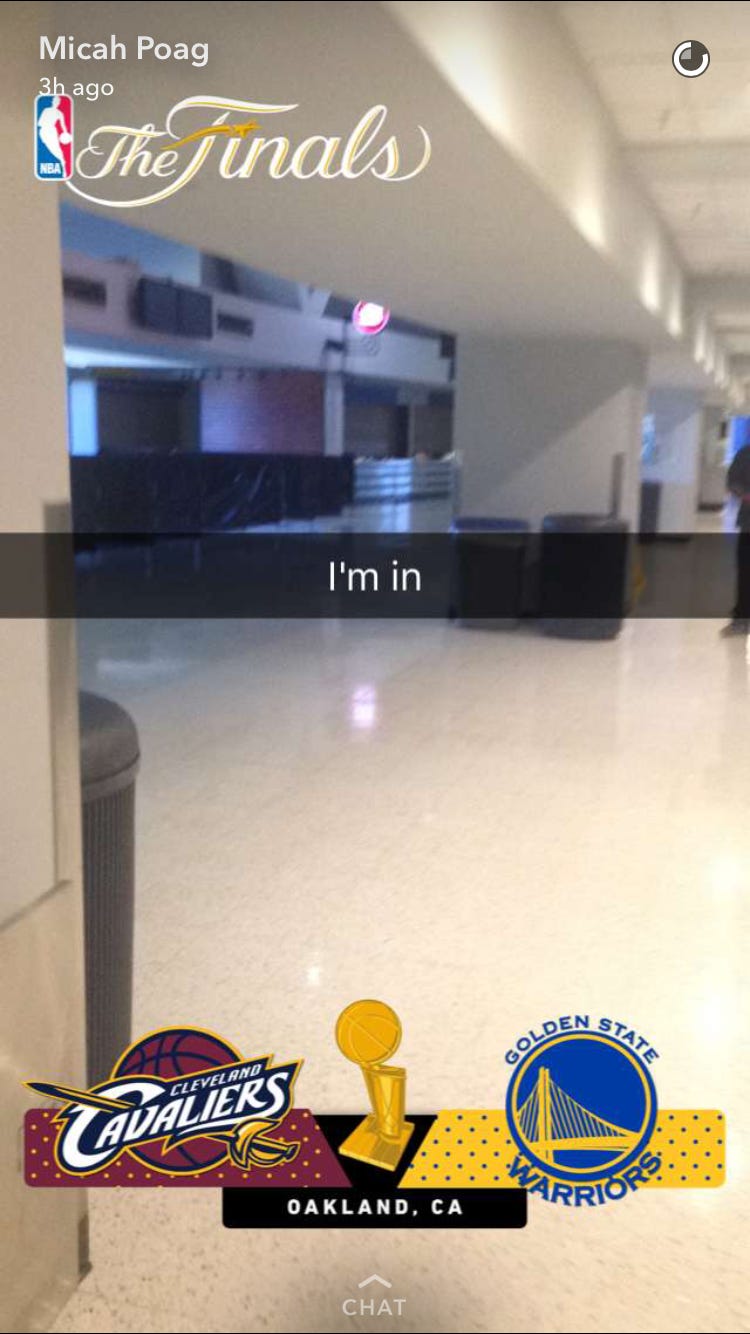 On his second pass around the stadium, he found an open door where a window washer had stepped out of the stadium. He walked up and started talking to the guy, when a security guard walked over. “I kind of stepped up and showed the guard my press pass real quick and she didn’t really say anything and sort of gave me a nod in, and I proceeded to walk past her. When I was about 15 yards past, I heard her say ‘Hey,’ but then I didn’t look back.”

After that, he waited. “I walked into the men’s bathroom and I took a stall and I literally pulled my pants down like I was taking a shit,” Poag said, “because no one is going to bother a guy taking a shit, and then I sat there for two hours.” 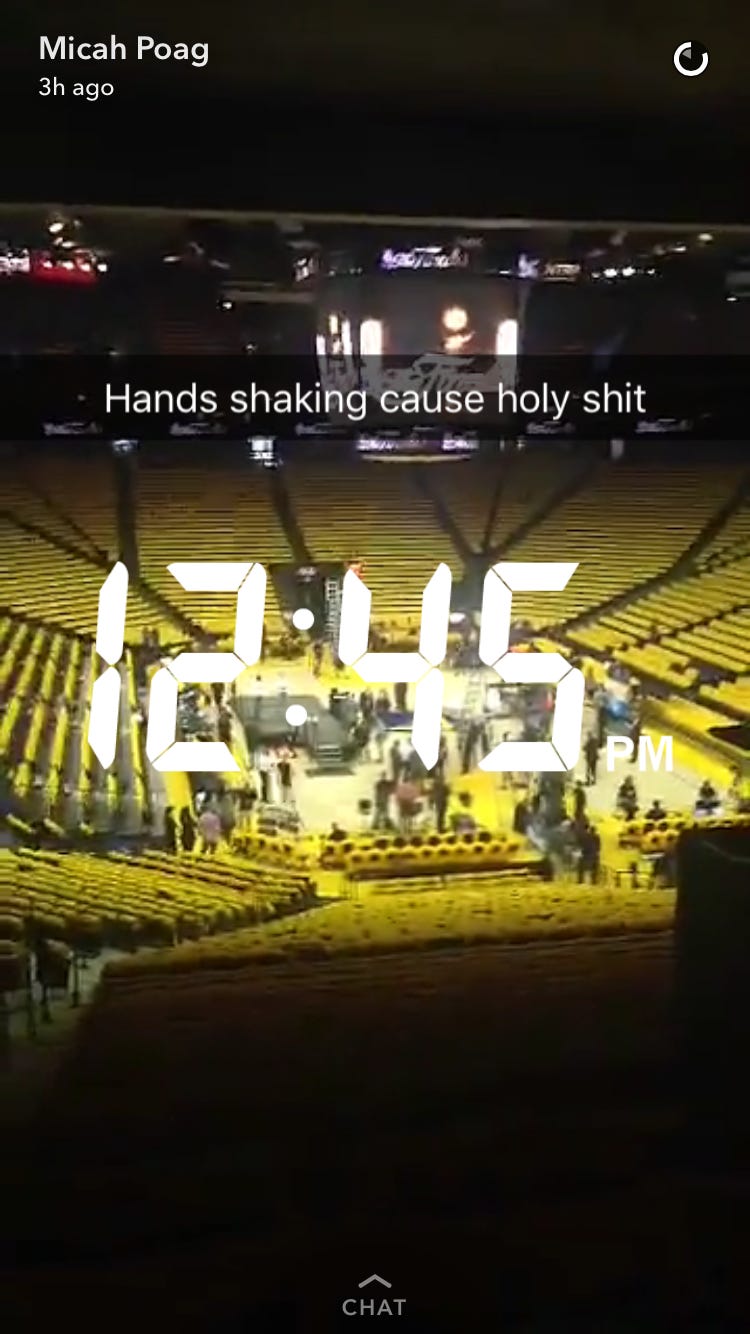 Micah said that at around 3 p.m. he saw fans were starting to be let into the stadium. So he emerged from his hiding place and once he saw he could give up the self-described reporter’s outfit, he put on his Warriors jersey, climbed up into the nosebleeds, and poached some seats. “I watched the game pretty casually, pretty easily.”

What’s the secret, besides an internet connection and a printer? Micah nailed it:

“Looking the part is a huge part of it. I think it’s pretty easy when you’re a white kid dressed in khakis with a suit on,” Poag said. “I think if you’re confident it helps.”

Be confident, and be a well dressed white kid. To quote DJ Khaled, major key.