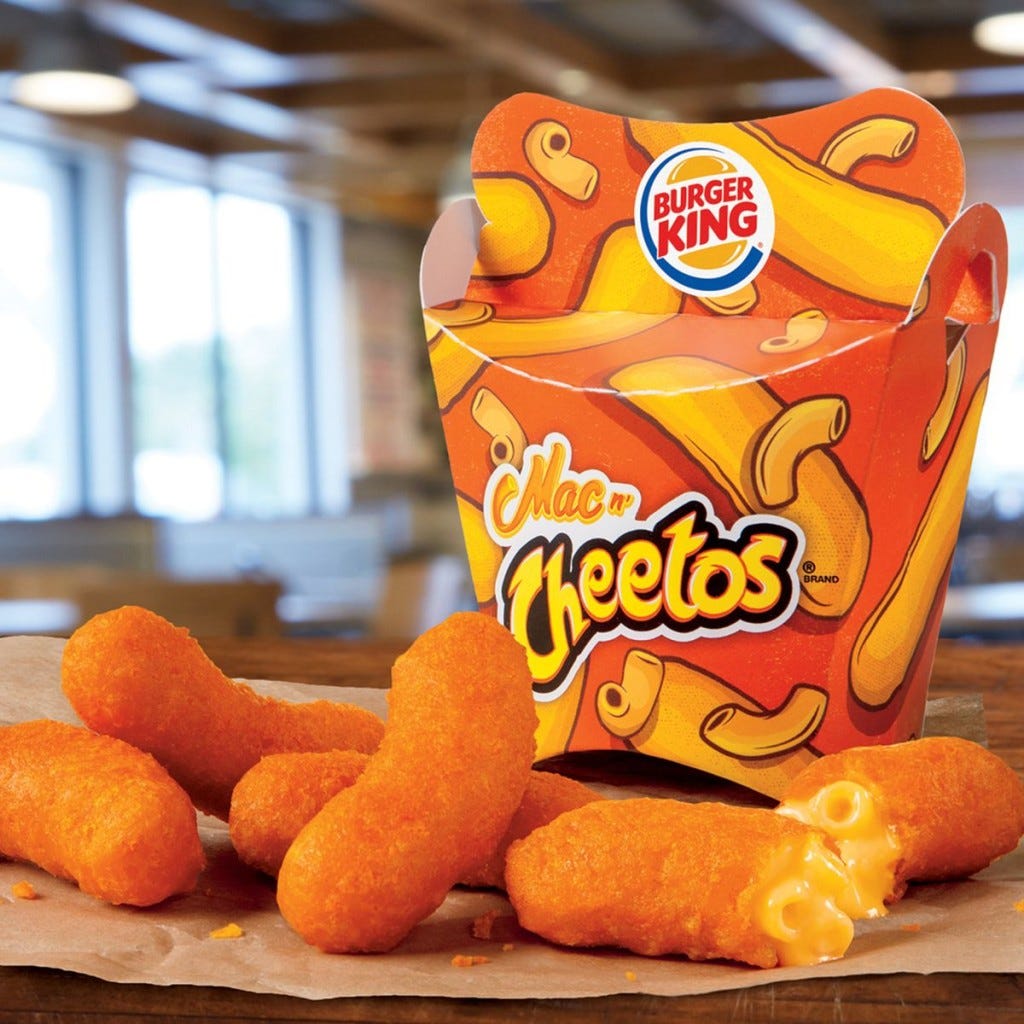 Bloomberg- Burger King, the restaurant chain backed by 3G Capital and Warren Buffett, will begin selling deep-fried sticks of macaroni and cheese encrusted in Cheetos-flavored breading, part of a trend toward blending fast food with well-known snack brands.
The new product, called Mac ’n Cheetos, emerged from a partnership with PepsiCo Inc.’s Frito-Lay, the snack empire that owns Cheetos, Doritos, Ruffles and other chips. The move mimics the strategy of Yum! Brands Inc.’s Taco Bell, which introduced a taco with a Doritos shell in 2012. That item, called Doritos Locos Tacos, helped turn around sales at the then-struggling chain and offshoots followed: Cool Ranch, Nacho Cheese and Fiery Doritos. Mac ’n Cheetos will be sold for about eight weeks or until supplies run out, said Burger King, which is part of Restaurant Brands International Inc. The $2.49 five-pack of portable macaroni-and-cheese bites are similar to mozzarella sticks. The item, which has 310 calories, has already appeared at some Burger King restaurants in a trial phase.

I’m nervous, guys. Usually when I see something like this, I get real excited and just the mere thought of trying something groundbreaking gets me through the day. I’m at the fast food joint the day they come out, do a 15 Second Food Review, and probably hit the place up a few more times over the next month. But this is different. These are two American classics on the level of the bald eagle and Uncle Sam. Cheetos cheese dust is so unique and great, just like Reese’s peanut butter (not the fraudulent stuff they sell out of a jar, but the peanut butter they put in their cups). I’m also a bigger crunchy cheese doodle guy than puffed. But puffed Cheetos are legit. Still not as good as crunchy cheese doodles, but Chester Cheetah has more than a few beach houses for a reason.

And mac and cheese bites have revolutionized the appetizer game in countless restaurants around the country. Putting them together could actually change the course of American fast food history as we know it, like an edible Marty McFly. The Doritos Locos taco changed the taco game forever and this could do the same for the fast food snack game. And if that happens, I am going to unleash hell on them. And they will unleash hell on my already struggling waist line.

Or they could be utter trash like BK hot dogs. I don’t know. But at least it seems like Burger King seems to be trying harder than putting The Whopper in a burrito.

And since I mentioned them, here is my 15 Second Food Review playlist with a few new additions.