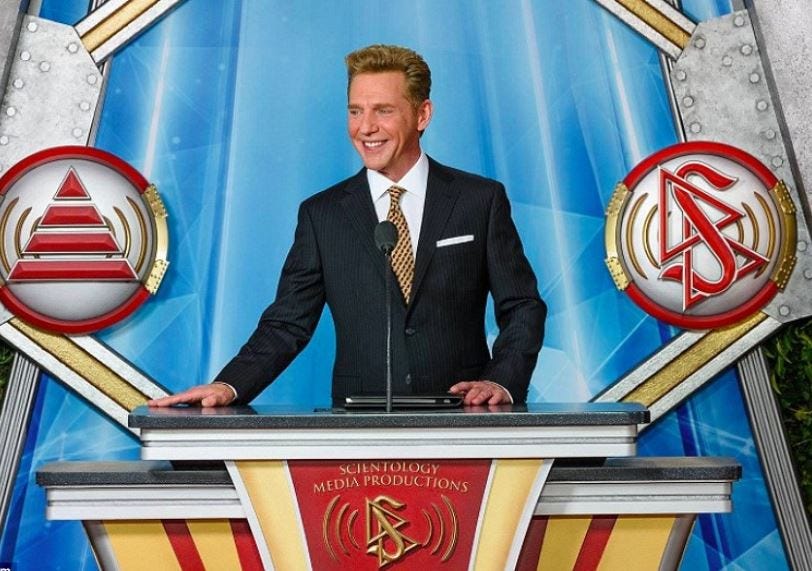 (Is that not the most cult face of all time? Screams cult face)

Dailymail - Hollywood may never be the same again now that the Church of Scientology has opened its new movie studios, which they claim has bigger and better facilities than Paramount. Leader David Miscavige announced to the world that this will be an ‘uncorrupted communications line to the billions’, as Scientology promises to reach ‘virtually every person on Earth’. The colossal studio complex on Sunset Boulevard in Los Angeles was finally unveiled after five years of renovations at a cost of at least $50 million on May 28. The new studio will also be used to make polished propaganda movies to recruit more followers while it’s most famous recruit, Tom Cruise, is set to film his Hollywood blockbusters at the glittering base, which has bigger studios and sound stages than Paramount, the church claims.

Has any organization ever needed new blood pumped into them more than Scientology? Like rule #1 of a cult is you need to grow super fast and take over the world when the opportunity presents itself. You can’t let your cult just linger. The longer you drag your feet the less impact you have. Everything needs to happen super fast so people don’t have time to think. It’s like if you don’t jump in this spaceship, put on this white suit, give us all your money YOU WILL DIE! But if. you just sit around not making big moves suddenly people start questioning what the fuck is going on. I mean Scientology has just been sitting there for 2 decades now. Tom Cruise and John Travolta are still their biggest free agent signings. This can’t build confidence. I don’t care how big this movie studio is. It’s 20 years too late.