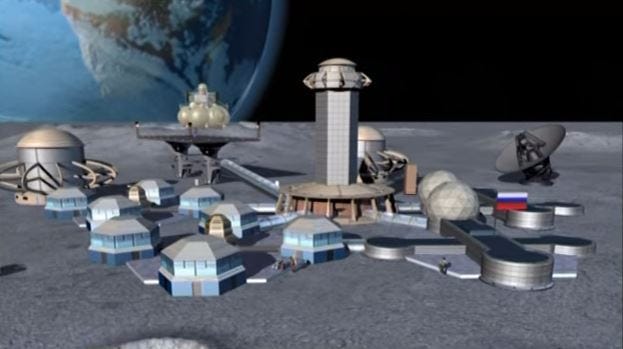 The Sun — The Russian equivalent of NASA has announced plans to permanently station 12 cosmonauts in a secret base on the moon.

It might sound like the plot of a James Bond movie, but the very real plan is likely to leave politicians from the West feeling both shaken and stirred.

The space agency RosCosmos has spent years working on its lunar base scheme and has slowly released tantalising details of the plans.

Now it has announced that a dozen cosmonauts – the Russian word for astronaut – will live on the base.

“At the initial stage, the Moon base will be manned by no more than 2-4 people, with their number later rising to 10-12 people,” Olga Zharova from the Central Research Institute of Machine Building (TsNIIMash) told the newspaper Izvestia today.

The base is likely to be built near one of the moon’s poles, with a power station buried beneath it.

Oh man Newt Gingrich is not going to like this.

I’m all in on a moon base. It’s not just that I want one — it’s that I believe we NEED one. Without it we’re chopped liver out here floating around the Milky Way. Imagine aliens whip out their telescope, point it at earth for the first time, then check out the moon and see no moon base? How embarrassing. They’ll know from 100 light years away that we’re a joke. That we’re not to be taken seriously.

But if they see a moon base? No choice but to assume we must not be fucking around. We’ll look legit and they’ll have to move on to easier prey. It’s a deterrent and we need that puppy installed yesterday. Don’t love that it’s Russian, but if it’s not something then we’re all gonna be incubating while plugged into the Matrix one day and the chances of us being lucky enough to be born as dudes in America twice in a row aren’t great.