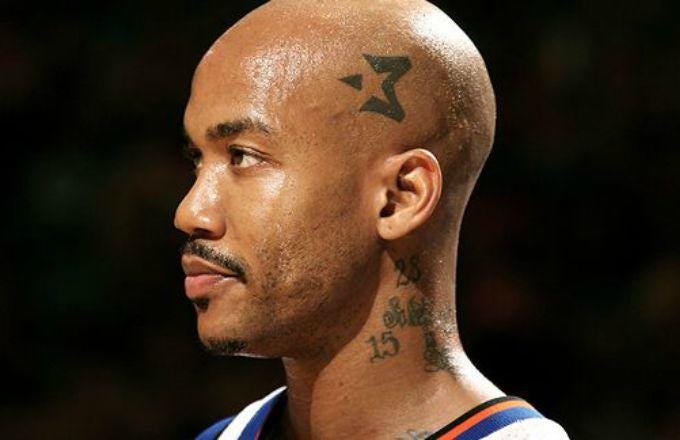 The Wrap- Former NBA star Stephon Marbury will star in a Chinese-language biopic of his own life, “My Other Home,” co-produced and co-financed by SK Global and China’s Hairun Pictures.The film is based on the life of Marbury, who will play himself.
“My Other Home” will chronicle his ride to stardom, his troubles with the NBA and his ultimate transition to playing professional basketball in China. Marbury played 15 seasons in the NBA and currently plays for the Beijing Ducks, helping the team to three CBA championships. The film has been shooting in Beijing and moves to New York at the end of June. Ivanhoe had partnered with Hairun, as well as Chinese co-investors Beijing Forbidden City Film Co., and Desen International Media.

That right there is a Must Watch movie if I’ve ever seen one. This could break the Rotten Tomatoes scale. Has 0% Fresh ever happened before? Because a Stephon Marbury Chinese biopic starring himself as the lead role was made to be covered in stinky ass tomatoes. That’s not to say it won’t be entertaining. I need to see what caused Steph to think that leaving a budding superduperstar in Kevin Garnett for the swamps of New Jersey was a good idea. Or how long the idea of the Starburys, along with the head tattoo, were bouncing around in his brain. And if that is all done with I AM PEACE STAR talking in broken Chinese, even better.

As for the Knicks years, they will feel like the last 10 minutes of Requiem For A Dream. James Dolan can be played by an Ewok, Isiah can be played by the actor that was that snake oil salesman Clay Davis in The Wire, and we can still probably film some sort of ass to ass scene with those two. Steph’s time in America will then culminate with him eating that fucking Vaseline like some sort of maniac before he goes to China to win championships, have statues built for him, musicals written about him, and a ton of other shit that makes no damn sense to me.

Sorry Kobe. Steph is the last one standing AND has a biopic coming out. #GOAT