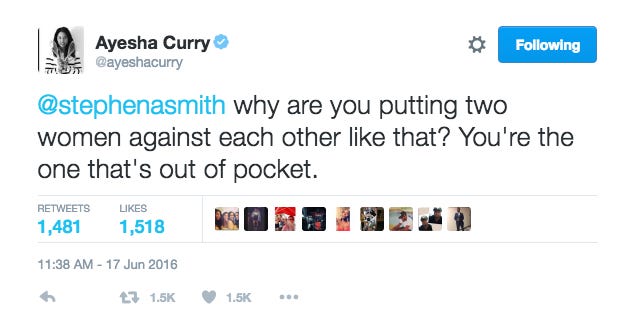 Uh oh guys, I think Ayesha may have reached the point of no return. One thing is to fire off tweets at 99.999% of the world and just toss flames at each other. It’s quite another to go at Stephen A. Smith. The man who thinks he would have won the OJ trial even though he isn’t a lawyer. The man that said he’s never lost an argument because he either wins the argument or he learns something new during the argument, so it makes him the winner. You cannot reason with someone like that. Adrian Balboa (RIP) (The character not the actress) (Spoiler Alert) needs to slide into Ayesha’s DMs and give her the “You can’t win” speech from Rocky IV. Because getting into a gutter war with Stephen A. Smith is like fighting a land war in Asia. He is the pink slime in Ghostbusters 2. The angrier you get, the more powerful he becomes. Ayesha, you have a beautiful family and millions of dollars. Is this really a man you want to cross?

Under Armour really needs to release an even uglier shoe than the Curry 2s ASAP to get the heat off Ayesha, because she’s drowning out there. And Harrison Barnes needs to send Ayesha a fruit basket or something for taking a bunch of heat off of his bum ass for the last two games. And while I am probably going to turn off Game 7 and my Twitter for an hour to focus 100% on Thrones, I probably will turn on notifications for Ayesha Curry. Because like KFC said, I have no idea what she has in store for us on Sunday night.