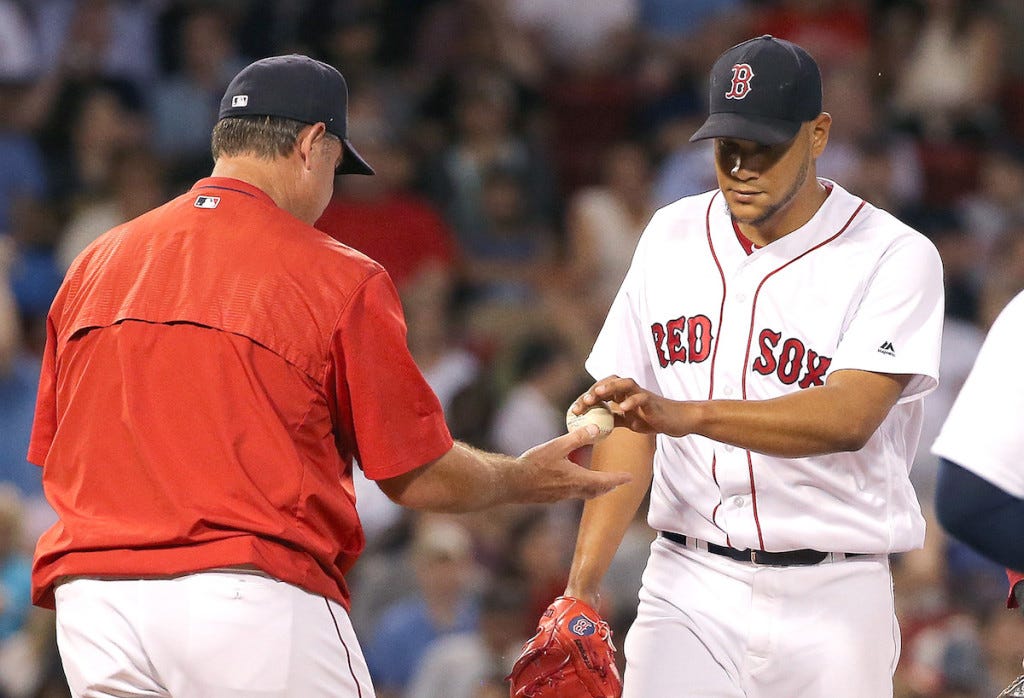 Last year, it was pitch tipping. This year, it was the knee injury, followed by only using his fastball, and now here we are, right back to where we started. Eduardo Rodriguez is tipping his pitches again, according to WEEI’s Lou Merloni.

For those who are curious, no, this isn’t how he was tipping his pitches before. When pitch tipping as an issue last year, this is what Rodriguez was doing.

So, if he was tipping his changeup, then his changeup was probably getting crushed all night, right? Not quite. Rodriguez threw 18 changeups last night, and only seven of them were strikes, with only two of them being put in play. One was an 0-2 changeup to Joey Rickard that he hit for a double in the third inning. The other was a 3-2 pitch inside to Chris Davis that he grounded out on.

If he’s tipping the changeup, and the only damage done was allowing one double, then it’s not really an issue, right? Wrong. Think of it this way — what have we been complaining about since Rodriguez has come back? All he’s throwing is fastballs. He’s thrown 364 pitches in his four starts this season, and 250 of them have been fastballs. That’s 69% fastballs. If you’re a hitter, you’re not looking for Rodriguez to tip that he’s about to throw a changeup, because he can’t throw it for a strike. You’re looking for Rodriguez to tip that he’s NOT about to throw a changeup, because that can only mean that a fastball or a slider is coming. He’s a three-pitch pitcher. He has the fastball, changeup, and slider. That’s it.

He’s thrown 35 sliders in his four starts, and 21 of them were balls. The scouting report is out on Rodriguez. If you pick up the ball to know that a slider is coming, don’t swing. Odds are, it’s going to be a ball. If you’re looking at that glove, and Rodriguez tips that it’s not a changeup — so now it can only be a fastball or a slider — then there’s an 88% chance that it’s a fastball. That’s why he’s getting rocked. These hitters are sitting on fastballs and crushing them. The Orioles hit .385 with an 1.198 OPS against Rodriguez’s fastball last night.

Red Sox manager John Farrell was asked after the game if he was aware of the pitch tipping, and he just came up with some bullshit about how he was missing location. Yeah, I’m sure he was missing location…in addition to tipping his pitches, especially if a former major leaguer knew when every single changeup was coming. They have to fix this, and they have to fix this before he makes his next start.

Now, I don’t want this all to be about Rodriguez and his struggles. He has an 8.59 ERA over his last three starts, and opponents have a 1.052 OPS against him over that span, but that wasn’t the only issue last night. The Red Sox offense faced a pitcher by the name of Tyler Wilson, who nobody outside of Baltimore has ever heard of, who had a 6.67 ERA in his five starts leading up to last night, and he shut the Red Sox down. Eight innings, three hits, zero runs. Who the fuck is this guy?

You want an alarming stat? The last time that the Red Sox won a game that they scored less than five runs was back on April 29 in a 4-2 win against the Yankees. Every single win since April 29, the Red Sox have needed at least five runs to win every game. I know it doesn’t sound right, but see for yourself. If you can keep the Red Sox to four runs or less, you win. That is fucking horrendous. And while the Red Sox have been busy losing 8 of their last 13 games, the Toronto Blue Jays are back from the dead, and they closed the gap on everybody. They’re a game back of the Red Sox for second place, and two games back of the Orioles for first.

In Dombrowski We Trust? Maybe? I think? I hope?