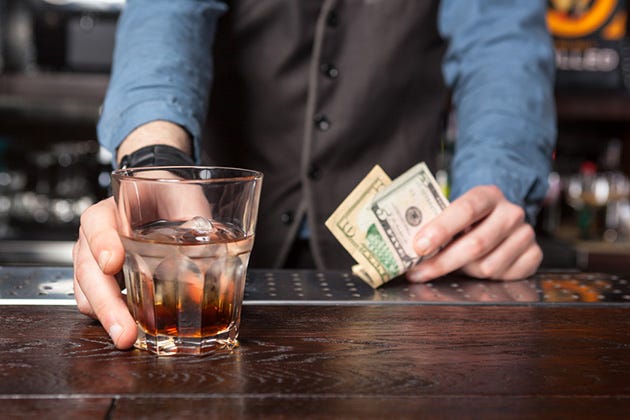 Mashable- People can be extra generous when they’re drunk, and extra regretful when they’re sober. Bee Anantatho owns a popular Thai restaurant, Thailicious, in Edgewater, Colorado. Thailicious has been in the neighborhood for several years, and the restaurant’s customers have reportedly always been loyal. This weekend, one of the restaurant’s customers decided to show off his gratitude — by leaving $1,088 as a tip.

The server who received the tip brought it to Anantatho and wanted to put it in the tip jar, where all the waitstaff shares their tips. “He said he’d read a lot of stories like this, but usually the tip is a couple hundred dollars, not $1,000,” Anantatho said of the waiter to The Denver Post. “He was so happy.” Happy — but only for so long. Anantatho encouraged her staff to hold onto the tip in case the customer returned. Which he did, the next day, full of regrets. “He said, ‘I’m sorry, I was drunk,'” Anantatho said. “He didn’t know he put all the money he had in the checkbook.” Some of the $100 bills the customer put down, Anantatho said, the customer thought were $1 bills. That must have been one hell of a drunken noodle. The customer left Anantatho $100 — $60 for the meal, and another $40 for the tip.

If I was that waiter, I would have told that customer to go fuck himself. Yes I understand that a $1,000 tip is one of those “if it seems too good to be true, it probably is” scenarios. But still, how many times have waiters gotten stiffed in tips because the customer was too drunk to tip properly? Probably a million times per weekend. This guy dropping a $1,000 tip is an autocorrect for past wrongs done by other customers around the country. You can’t take shit back just because you were drunk. That is like putting toothpaste back in the tube. All your awful, terrible decisions when drunk are final. That next morning dread is just as much a part of drinking as the feelings of being drunk and hungover. It’s one of the reasons banks don’t need to stock too much receipt paper in their ATMs. Because people that went out last night know they spent too much money and made bad decisions without having to be reminded that they did so.

The person you made out with the night before isn’t going to change. Same for the videos of you embarrassing yourself that your friends took. And neither should the tip you left. And can you imagine what would happen to the strip club business if you were allowed to take back any bad decision you made with your money while drunk? Instant bankruptcy for an entire industry. When shit went down in Blood Diamond, they would say TIA for This Is Africa. If you leave a cool grand in tip, you just have to shake your head, lie to yourself by saying you will never drink again, and realize that This Is Drinking. TID, baby. To quote a man much wiser than I (Homer Simpson) “Alcohol is the cause of and solution to all of life’s problems”. That’s just how the universe works.