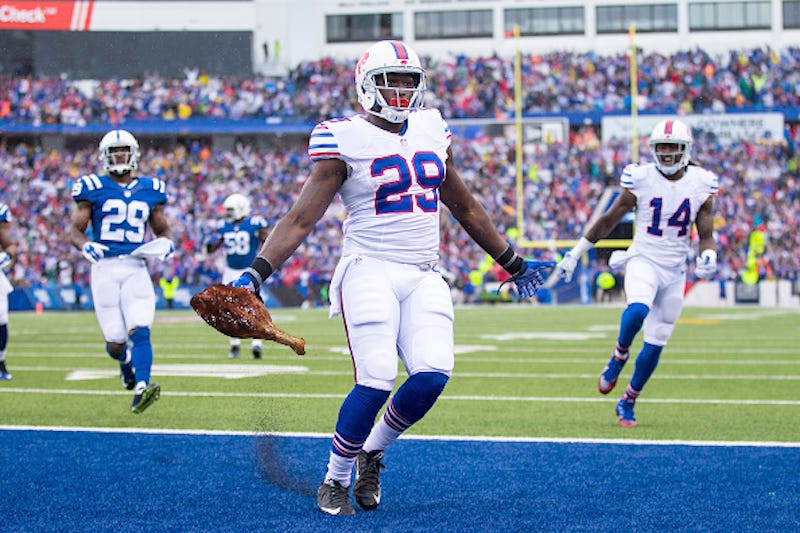 ESPN- Buffalo Bills running back Karlos Williams showed up out of shape to mandatory minicamp Tuesday and later claimed his poor conditioning was because of his fiancée’s recent pregnancy and her associated food cravings. “I like to eat and then her being pregnant gave me an excuse to eat, so eating anything and everything,” Williams said. “She’d wake up, one or two o’clock, ‘I want a snack.’ Well I’m not going to sit here and watch you eat because I don’t want you to feel bad, but it’s back to football. She’s getting back to working out herself, so kind of motivating each other, feed off each other’s energy, and we’re getting ready for camp.” Williams, 23, welcomed his fourth child last month. When asked Tuesday if he was dealing with an injury, Williams responded, “The injury of pregnancy, I would say.” Williams, who is listed on the Bills’ roster at 230 pounds, appeared heftier than that weight at Tuesday’s practice after missing organized team activities this spring. Williams participated in warm-up drills before assistant strength and conditioning coach Eric Ciano put the second-year bruiser to work on an exercise bike on the sideline.

“I don’t think it’s gonna be easy. I don’t think that at all,” coach Rex Ryan said Tuesday when asked about getting Williams back in shape. “Obviously, he’s had some different things. I know some personal things, all that. But we do have to be slow with him.” Ryan said the Bills won’t put “a ridiculous weight number” on Williams for when he returns to training camp next month. “We’re gonna put something that’s attainable for him,” Ryan said. “But what you don’t want to do, you don’t want to have him — all the sudden he’s gonna drop 20 pounds and he comes out here and he gets hurt the first day of training camp. That’s what we’re trying to avoid. “So we got to get him to the right things. Obviously he’s not anywhere close to where he needs to be to play at a high level. We got to get some weight off of him and he certainly understands that.”

I see both sides in this matter. As somebody that has watched players like Jerome James and Eddy Curry turn into balloons in the Macy’s Thanksgiving Day parade while being paid millions to stay in shape and play a sport, I understand where the Bills are coming from. But as somebody that has rarely been just “slightly overweight”, let alone in football shape, I sympathize with Karlos Williams. Not just because I’m the fat kid that loves cake in 50 Cent’s song. But because I’ve also lived through a pregnant wife’s cravings. And that shit is no wives tale. Cravings for the best (or worst, depending on how you look at it) food in the world as some little human grows inside of her stomach while her emotions go on a roller coaster ride that makes the Scream Machine look boring. And the food combos sometimes don’t even make sense, but they are always tasty. Ice cream and potato chips. Making a run to McDonald’s for some apple pies and nuggets, followed by a trip to Wendy’s for a Frosty to dip them in. Most girls aren’t sticking to the diet of salads and gurgling hunger when a baby is inside them. This is their Hall Pass to go nuts. And you know what, it’s great for the guys too. I mean it’s absolutely horrible for our health, but it makes it so much easier to just cut loose and eat nothing but rubbish like Kevin McCallister because your boss at home wants to eat rubbish. It’s damn near the American Dream. Your life as you know it is about to end, so you might as well go on a culinary honeymoon before sleep and freedom are a distant memory.

But my biggest problem in this whole story is Rex being upset. Rex sold out Fat America with his lap band. He has two kids though, so he’s been through this. In fact, I bet “Lets go eat a goddamn snack” was a phrase that his wife coined during her first pregnancy. So Rex telling a guy to work out and lose weight after his wife just had a kid is like a guy telling you to beat Mario 3 like he just did, except he was allowed to use the magic flutes and you are not. Some Grade A malarkey. Plus, the Grit Week’s tour of Buffalo tells me that it’s not exactly the place full of people on cleanses or all green diets. I think even though he’s a defensive coach, Rob Ryan and his gut should be the one that decides the punishment for Karlos Williams. It’s only right.

This is the realest shit they ever wrote. I dont care if you’re an NFL player or a blogger or a cube monkey, when your wife gets knocked up, you’re getting fat. Thats just how it goes. Your fridge is stocked, your meal selections are horrendous, dessert is always a yes. Its a health disaster. And I know I’m a big advocate of #SeparateDinners in life, but that all goes out the window during pregnancy. See what happens when your wife is stuffing her face with cookies and asks if you want one and you say “no thanks I cant. Too many carbs.” See what happens when you’re ordering dinner and she’s getting a deep fried buffalo chicken quesadilla and you try to order a grilled chicken breast because you’re trying to be healthy. See what the fuck happens. You get that passive aggressive “Oh.” Followed by “OK well then I’ll just have the grilled chicken too.” Coupled with a huff and a puff. And then a look of instability in her eyes thats borderline terrifying. It looks like shes about to turn into the Incredible Hulk. She looks like Chris Farley in Gap Girls

And in that moment your choices are A) Eat healthy and potentially have your wife rip your limbs off and beat you to death with them, or B) Eat some junk food and live to fight another day. Bubble in B on your Scantron, folks!

Its actually one of the rare times in life you have an excuse to eat however you want so you might as well cash in. You can tell yourself you get to be a fat fuck AND you’re a hero for being a supportive husband and dad. Its Spin Zone heaven, filled with chips and donuts and whatever it is that your monster wife is craving next. So satisfying its worth jeopardizing your multi-million dollar job.