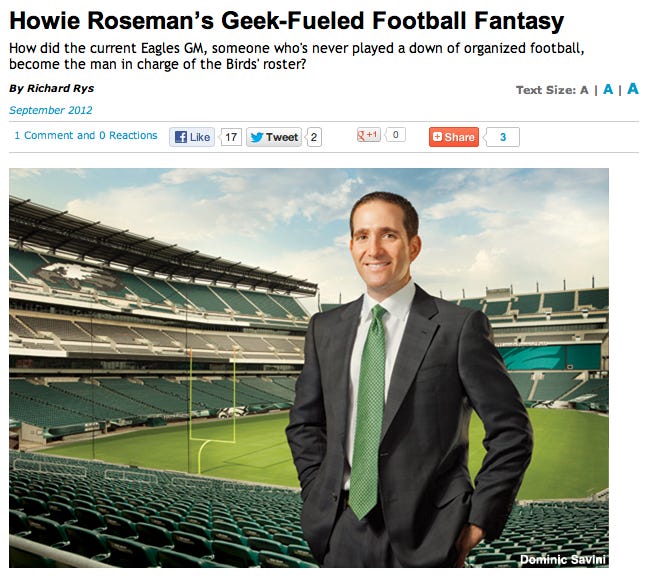 PFT – With last night’s mega-deal for defensive tackle Fletcher Cox, the Eagles have proven they’re serious about spending money for football players. Now they just have to prove themselves good at playing football. According to ESPN Stats and Information, the Eagles have now doled out over $280 million in guaranteed money this offseason, nearly double any other team including the drunken sailors of free agency, the Giants. By doing so, they’ve doubled down on the core of a team that went 7-9 last year, after going 10-6 the previous two seasons under a coach they couldn’t wait to get away from.

Look, for as much Howie hate I spew on these interwebs, I will give credit where credit is due on two things:

1) The man is good with money and the cap. If we could simply find a way to stuff him in a locker and only take him out during contract time then it would be a match made in heaven. Extending the likes of Lane Johnson, Vinny Curry, Zach Ertz, and Fletcher Cox (albeit the biggest non-QB deal in history) were all good moves. Even the Bradford deal was decent low risk, high reward contract. The only money move I take issue with is giving a backup (now 3rd string) QB $12 million to essentially be a glorified coach. But still, I can’t hate on Howie’s 6th natural sense of dealing with money. Can’t. Won’t.

2) Howie Roseman’s outright snakeness. The man is a certified genius when it comes to playing any hand to his advantage. Shit, if he was in politics I wouldn’t doubt he could be a Doug Stamper type who slays shit behind the scenes. Look at everyone he’s devoured in his path to get to his SECOND stint as GM for the Eagles. Joe Banner. Tom Heckert. Tom Gamble. Ed Marynowitz. Chip Kelly. The man is as shrewd as shrewd gets, and I respect that. And now he’s doing all he can to ensure his dick will be stamped down on this franchise for at least the short term. Think about it, as it’s rather genius. Trading up to #2 and making all these big time power plays does nothing but guarantee Howie Roseman’s job for 3+ years. The shit could hit the fan next season and the excuse is already in place for a “Well, Carson Wentz and these guys need to develop.” Or they could take off and Howie is set for life. It’s a win-win and, again, genius by Howie.

Overall I find it fascinating a guy who was the catalyst to one of the worst draft/free agency off-seasons in NFL HISTORY in the 2011 Dream Team is still allowed to do what Howie Roseman has done this off-season. And people thought Chip Kelly was being boom or bust last year. That’s not necessarily hating on Howie, but dammit, the moves this man and this man ALONE has made will set this team in stone for the next half decade, for better or worse. And it better be for the better because my father doesn’t have that much time/heart left to deal with many more 5-year-plan.