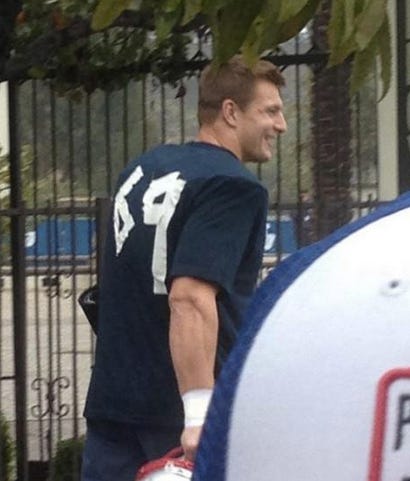 (ESPN) — Bill Belichick has preferred to have players in numberless jerseys during spring practices, but the NFL instituted a rule in 2016 that prohibits him (and other teams) from doing so. The league is now requiring all players to wear jersey numbers when on the field in Phase 3 of the offseason program, which is organized team activities and mandatory minicamp. According to NFL spokesman Brian McCarthy, it was instituted to “ensure clubs are in compliance with workplace rules” (e.g. injured players shouldn’t be participating) as it “will permit the league office and NFLPA to monitor player participation during on-field sessions.” Belichick, similar to legendary Pittsburgh Steelers coach Chuck Noll, liked the numberless jerseys in part because it forced players to communicate more on the field while getting to know one another beyond their number. The NFL’s new rule comes one year after the league instituted a change with declaring eligible receivers ineligible, a tactic that helped the Patriots beat the Baltimore Ravens in the playoffs.

Ah, yes, this new rule that exclusively affects the Patriots is certainly to “ensure clubs are in compliance with workplace rules.” It’s simply to prohibit Belichick sneaking injured players onto a practice field. Kind of hard to look at this as anything other than a reason to fuck with the Patriots, no? They Patriots are a guy whose pissed off the cops, but they can’t prove he’s done anything really wrong, so he hits you with a violation for not wearing your seatbelt. Two seasons, two stupid rule changes that are directed solely at the team in New England. The NFL will do anything to make their lives a pain in the ass. No numbers on the practice jersey has never been a problem, Belichick’s never tried to sneak someone with a torn ACL onto the field, but for some reason it’s illegal now. Can’t have Bill out there making his players communicate better, that’s an unfair advantage and ruins the integrity of the game. Can’t wait to see how many draft picks a team loses over something like this, though. Wrong practice jersey during phase three of the offseason program: that’ll be a first and a third rounder, thank you very much.