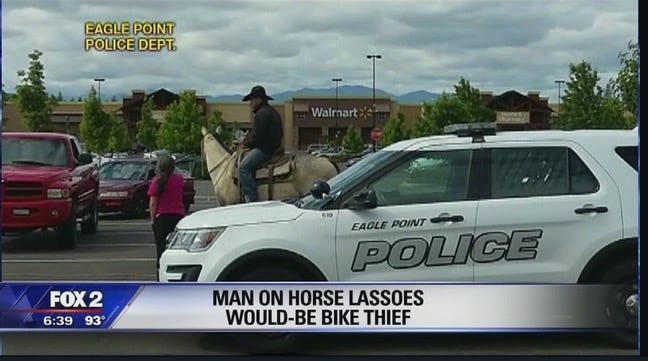 ABC News – A rancher jumped on his horse Friday morning and lassoed a man who was trying to steal a bicycle in the parking lot of an Oregon Wal-Mart, police said.

Robert Borba was at the Eagle Point store loading dog food and a camping tent into his truck when he heard a woman screaming that someone was trying to steal her bike.

The 28-year-old said he quickly got his horse, Long John, out of its trailer. He grabbed a rope, rode over to the man who was reportedly struggling with the bike gears and attempting to flee on foot. Borba lassoed the man around the legs and when he dropped, Borba dragged him to one end of the parking lot.

“I seen this fella trying to get up to speed on a bicycle,” Borba told the Tribune. “I wasn’t going to catch him on foot. I just don’t run very fast.”

Borba said the man tried to grab a tree and get away, but he kept the rope tight and the man in place.

“I use a rope every day, that’s how I make my living,” Borba said. “If it catches cattle pretty good, it catches a bandit pretty good.”

Eagle Point police Sgt. Darin May said officers arrived and found the lassoed man and bike on the ground in the parking lot.

“We’ve never had anyone lassoed and held until we got there,” May said. “That’s a first for me.”

This has got to be the absolute #1 most insulting thing that can happen to a criminal right? Literally the worst possible thing that could happen for a thief’s self confidence? I mean getting lassoed by a cowboy on a horse in the middle of a parking lot while trying to steal a bike. Does not get any worse than that. You got guys out here pulling off bank heists and stealing multi-million dollar works of art from museums – meanwhile you can’t snag a $150 Huffy without ending up tied in a knot on the concrete outside Wal Mart.

Poor Victorino Arellano-Sanchez needs to pick a new line of work that’s for damn sure. This is a picture you never ever live down in the criminal community. 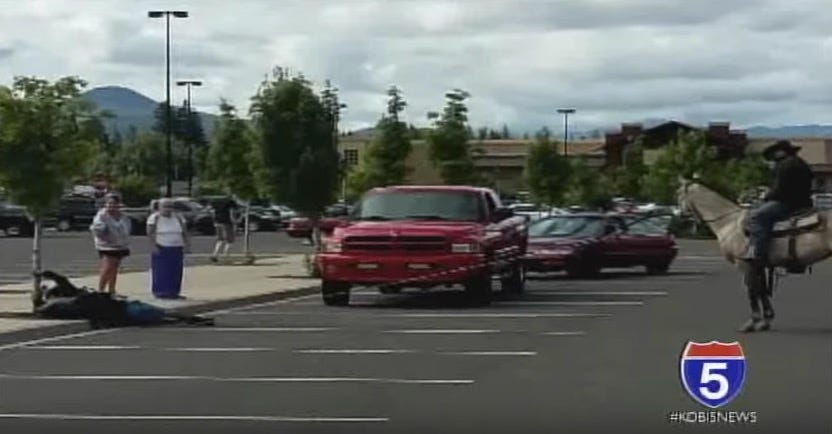 Also, not to inject myself into the gun argument or anything but, just spitballing here, what if we just equipped every citizen with a lasso and have Cowboy Robert Borba give out instructional lessons on YouTube or something? Seems like a good compromise. 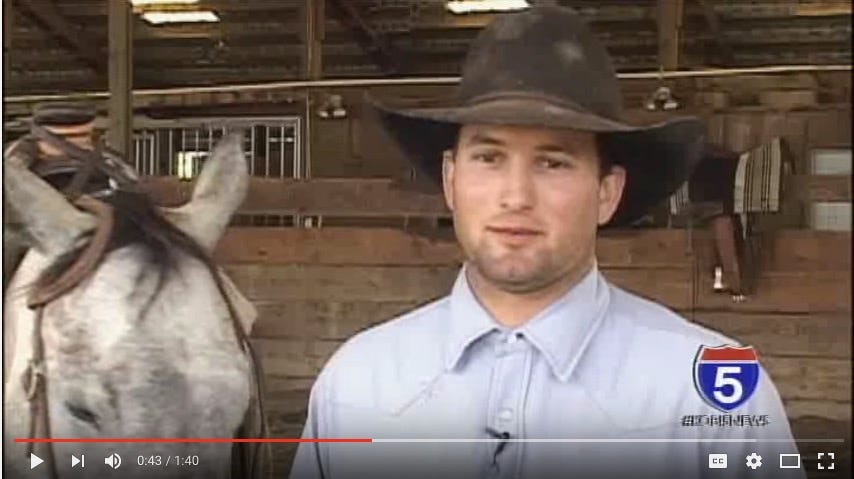