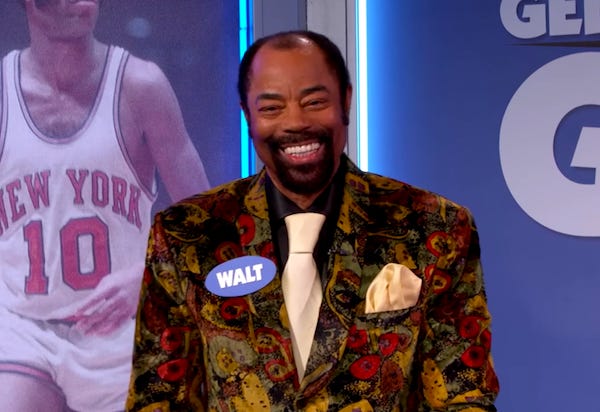 Clyde Suit Rating: Baby, I compare you to a kiss from a rose on the grey. Ooh, the more I get of you, the stranger it feels, yeah.

Did Clyde really create that jacket from his brain? Because if so, bravo. I always thought he just bought his threads from the finest pureveyors in men’s fashion from around the globe. If he actually has a hand in their designs and creation, then he is even more of a fashion icon than we thought. And putting him next to a dude with a unibrow was the fashion beatdown of the century. I mean I love Anthony Davis and how he owns his unibrow. But anybody looks like chopped meat when they are standing next to Clyde, let alone a dude with weird hair somewhere on his face.

As for the questions, I’m not shocked Clyde doesn’t know anything about Lemonade or that Jay-Z’s real name is Shawn Carter. I feel like Clyde is always listening to the Isley Brothers in rooms full of crushed velvet. Netflix and chill? Clyde has no time for these phrases. But if your lady friend wants to pick up that old camcorder over there, Walt would love to produce some surprisingly entertaining original content with her. And fuck if Clyde would know anything about Michaelangelo. The guy may sleep in a different womb every night, but I doubt he has ever left anything inside to grow over the next nine months. Dude is the savviest of vets. And the fact he went to Woodstock leads me to believe that much like one out of 200 males in the world is a descendant of Ghengis Khan, one of of every 200 living people in New York that are 46 years old or younger are likely direct descendants of Walt “Clyde” Frazier and whatever his actions were at that three day concert.