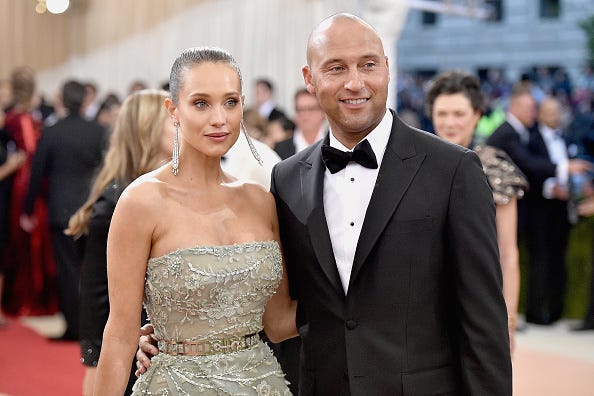 Page Six – Derek Jeter will marry Sports Illustrated Swimsuit Issue cover model Hannah Davis on July 2 in the gorgeous wine-country town of St. Helena in Napa County, Calif. Sources say that the couple chose the romantic destination because they want to keep their wedding small and private. And we’re told the guest list will be small and family focused.One source said, “Derek and Hannah planned to marry in a beautiful location, surrounded by just close family and friends. It is going to be an intimate ceremony, rather than a big affair with all the Yankees and every big name in sports.

“The wedding will be in Napa followed by a three-week honeymoon in Europe. Then they want to start a family and have kids right away.” It is believed the couple will wed at the prestigious Auberge du Soleil, a five-star resort on a ­33-acre olive grove with views of the Napa Valley. Guests expected include Jorge Posada, who asked the former Yankees captain to be his best man when he married in 2000.

So this is a thing huh? If I’m being honest I thought this would be one of those celebrity couples that just stays engaged forever, and by forever I mean until Hannah got one wrinkle and was out on the street. Turns out that’s not the case and Jeter is going to have a classy small wedding on 4th of July weekend in Napa.

Being a former baseball player and having a wedding in the middle of a baseball season is a pure power move to let all the current players know that they aren’t invited, without them having to wonder if they should be watching the mail. I’m not a fan of holiday weekend weddings because regular people normally do it because they’re cheap and got a deal or want less people to come, but for Derek its just that he doesn’t want people to come. Hannah probably has a ton of people but Derek’s list is going to be just family, Jorge, Andy, Mo, Gerald Williams in baggy jeans and Harold Reynolds for some reason that no one will understand.

Now the real question is, WHERE IS THE BACHELOR PARTY? That will be one for the ages and I imagine the guest list for that will be much different. That is either going to be just Derek and 40 models or Derek, 60 models, Cone, Wells, Gerald Williams in baggy jeans and Harold Reynolds for some reason that no one will understand. But Reynolds doesn’t get to touch or talk to any of the girls. Either way we won’t see pictures of this showing up anywhere. This is is also going to be a small private affair but more along the lines of an Eyes Wide Shut party than classy get together. Just picture the morning after looking like a scene from Smokin Aces.