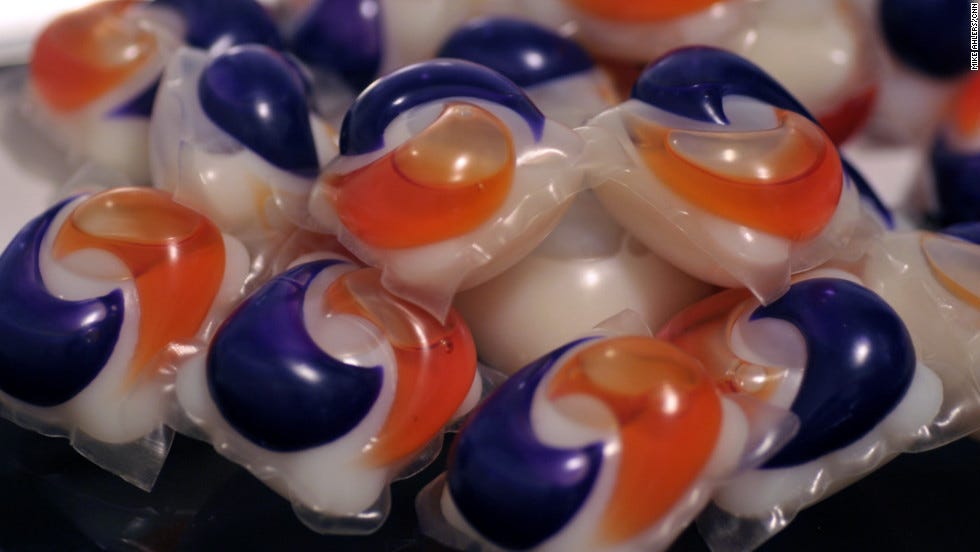 Alabama.com – The number of children who ingest laundry detergent packets in Alabama is on the rise, says one of the state’s top poison control officials.

The Regional Poison Control Center located at Children’s of Alabama has received 714 calls since 2012, an average of 15-20 calls per month, related to the digestion of the colorful detergent packets… Laundry detergent packets “are attractive,” she said. “They are colorful. They look like candy, and children are attracted to them.”

It literally takes seconds for a child to get a hold of a packet and put them in their mouths, Slattery said. The packets are easily for children to bite into, which means they get a large concentration of the detergent all at once.  “So that is one of the dangers,” she said.

I swear to god if any of these babies end up ruining laundry detergent pods for me I am going to lose my gosh darned mind. Like most single males between the ages of 18-30 who wishes I could still give my laundry to my mom, these pods have been nothing less than a blessing to me. Probably one of my favorite inventions of modern day times. If it weren’t for these pods, I’d realistically be forced to do my laundry on a monthly basis. But these little pods are the easiest things to use in the world and make life worth living. Throw the laundry in, pop in a pod, pray your colors don’t mix with the white (laundry is so fucking racist) and you’re good to go. Folding the laundry is a completely different story but as far as washing your clothes goes, the pods are everything. Now all of a sudden all these parents are up in arms about them. Say that they’re a “hazard” to children because they mistake them for candy and try to eat them. Well guess what, you idiots. You’re the hazards.

If you’re a parent and aren’t smart enough to keep your laundry detergent pods as far away as possible from your little snot-nosed baby well then you’re probably also a parent who shouldn’t be bringing their child around a gorilla exhibit. Some people are just unfit to be parents. It’s the cold hard truth. But somehow I see these stupid parents winning the battle here. Somehow someway they’ll end up getting these things removed from the shelves and all the progress I’ve made in growing up will go right down the drain. If your child gets a hold of one of these pods and ends up trying to eat it, I think the punishment for the parent should be that he or she should have to eat one as well. Don’t punish Tide for being the most brilliant company ever. Punish the parent for being the worst parent in America. Hey Obama, if you’re reading this, please don’t sign any legislation that bans laundry detergent pods. I won’t be able to take it.

Sidenote: At what point in growing up do you stop feeling accomplished and proud of yourself for doing your own laundry? Every time I do a load I feel like I’m the most productive human in the world.