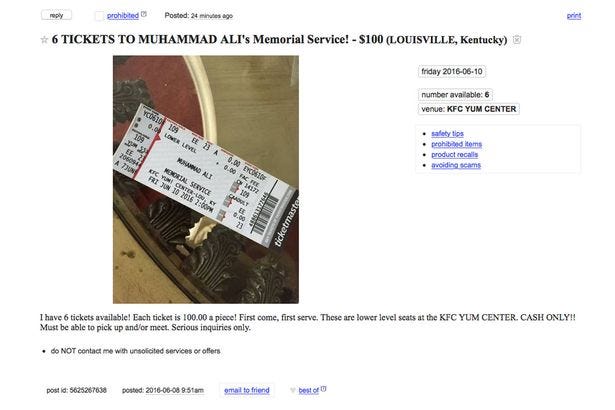 Courier Journal- While thousands weathered hours of waiting in line for a free ticket to Friday’s Muhammad Ali memorial service, some are willing to part with their piece of history – for the right price. The tickets, and many, many pleas for tickets, have flooded sites such as Craigslist, with sellers seeking hundreds of dollars for the Friday service at the KFC Yum! Center. One seller was offering five tickets on the site and included a photo of them as proof. “Ali tickets for trade of things valuble. What you got,” reads the post. Within the first hour of its posting Wednesday afternoon, an eBay post selling four tickets at $50 each had been viewed more than 100 times.

Many of the Craigslist posts from Wednesday morning were flagged and removed from the site by noon. KFC Yum! Center General Manager Dennis Petrullo said selling the tickets is illegal. “The value on the ticket was zero,” he said. “So if you tried to tell it for anything over zero it would be considered scalping.” But most of the online postings were people looking for tickets who were unable to wait in line or didn’t come early enough. Demand far outpaced need, a scan of the site shows. One Highlands resident is looking for one ticket to the Friday event, saying “I had an MRI scheduled this morning and could not get in line…” Adam from Ottawa said “I am flying in from Canada to pay respects to my childhood hero,” and said he is willing to pay $100. An Atlanta resident wants two tickets for $100. A mother and her child driving down from Chicago are ready to pay $50 for a pair. Within an hour Wednesday morning, about 10,000 free tickets were given to those waiting in a line that snaked around three corners of the block outside the arena. Those unable to secure a ticket can view the funeral live-streamed on a Jumbotron outside of the arena as well as on the Muhammad Ali Center website.

Listen, I understand why this pisses some people off. Selling tickets to a funeral just seems wrong, especially when they were given away for free. But at the same time, this is America. Land of free and home of capitalism. If the funeral was at some church, then selling tickets would be much more ridiculous. No different than when they scalped tickets to Temple on Curb. But this funeral is at an arena. And not just any arena, but the KFC Yum! Center. That arena has a fast food company, an absolutely ridiculous word to say AND an exclamation point in it. Capitalism at its finest. If you absolutely MUST see Muhammad Ali in a casket, you should have waited in line like everyone else or be willing to pay the people that put in the hustle (read: waited in line like dopes) to get those tickets. That’s America 101.