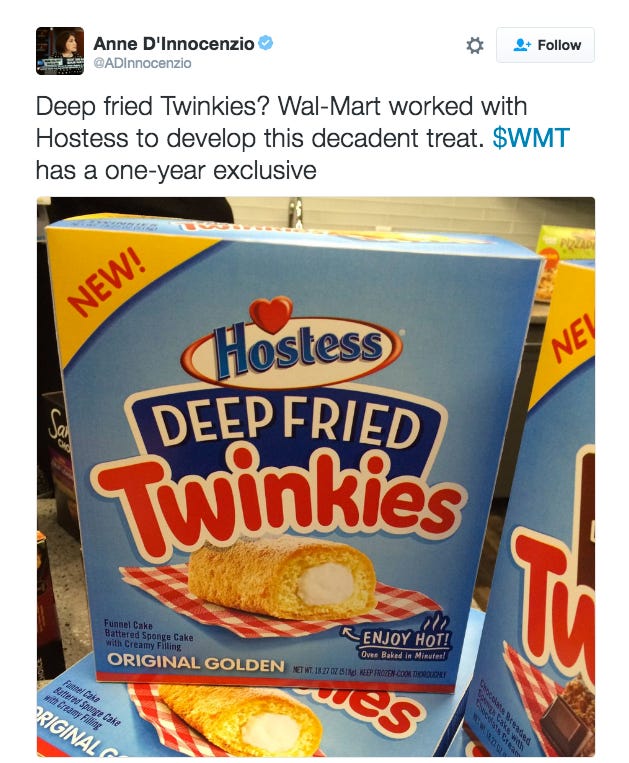 Grub Street- The much-heralded deep-fried Twinkie has, until this point, not only been the pinnacle of human culinary achievement, but it’s also existed as the holy grail of state-fair foods, a kind of sugar-laden cake mush all enrobed in a shell of crisp-fried batter. And now Hostess has unveiled a prepackaged version, meaning you can get at least some of the effect at home. Rumors of this potential innovation first began circulating last year, but now it seems they are real. And as you may have already guessed, these sweet babies will reportedly be available exclusively at Walmart, at least for one year, notes Anne D’Innocenzio, who covers the megachain for the AP. Take note that these will not be the kind of shelf-stable treats you just grab from the pantry. Instead, to emulate the straight-out-of-a-hot-vat-of-oil sensation, Hostess decided to make these a freezer-aisle item, meaning you will have to heat them, and that lots of lazy college kids will soon know exactly what a cold deep-fried Twinkie tastes like.

You honestly couldn’t come up with a more perfect combo than deep fried Twinkies being a Wal-Mart exclusive. The white trash Shawn Michaels and Marty Jannetty teaming up. I can already see people in Arkansas filling up their motorized scooter thingies to the brim with these spongy delights while wearing their Sunday best (the cleanest pair of sweats), likely followed by some fist fight and/or shouting match. Or hearing how some methed out lunatic in Florida was on his way home to cook a deep fried Twinkie and gets eaten by one of the 5 billion giant gators down there.

(Of course I’m going to try them anyway just for the #content. Yeah, that’s it).