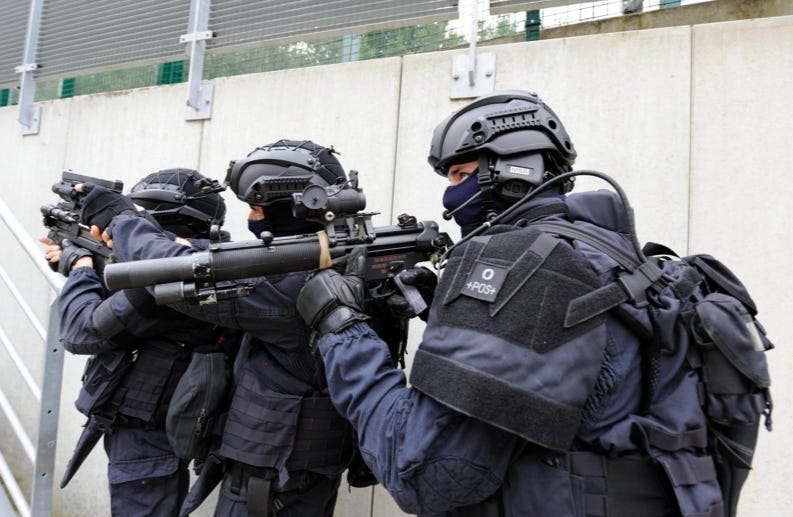 NPR - When two armed men burst into a McDonald’s in Besancon, France, on Sunday, it’s safe to say they chose the wrong fast-food franchise for a stickup. French police say the men in their 20s fired a warning shot and cleaned out the registers of about 2,000 euros ($2,280). But unbeknownst to the alleged would-be thieves, among the 40 McDonald’s diners reportedly that night were 11 off-duty members of an elite French special forces team that specializes in hostage situations. Qui savait!?

The members of the special forces are part of the Groupe d’Intervention de la Gendarmerie Nationale, or GIGN. The Washington Post says the GIGN “was created in the aftermath of the hostage situation at the 1972 Olympic games in Munich, when Israeli Olympians were held against their will and eventually killed.”

One of the would-be robbers reportedly tripped while trying to run out the door with his loot. And it was then that the special forces team nabbed him. The other man refused to drop his weapon when ordered to do so, French police said. A member of the special forces team then shot him in the stomach. None of the diners or employees were injured. The two suspects were sent to a nearby hospital for medical treatment.

Well that’s a real bummer. There you are, about to rob the shit out of the McDonald’s, you have the money in your hand, and someone puts down their cheeseburger and shoots you in the stomach. You don’t expect that in France, one because they are pussies, and two because they have pretty strict gun laws. So I cannot imagine the amount of poop that piled up their pants when they realized 11 of those people eating at McDonald’s were in the GIGN. That’s quite literally the worst case scenario. It’d be like trying to rob a bank while everyone who worked at the bank was a member of SEAL Team 6. Just the worst stroke of luck possible. So round of applause for the GIGN bros who put down their Royale with cheeses and saved the McDonald’s from being robbed on their day off.