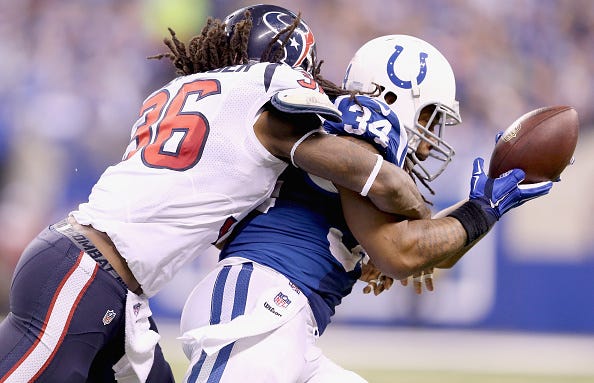 ESPN - Running back Trent Richardson was out of football last season. He has never averaged more than 3.6 yards per carry in an NFL season. But Richardson has lofty goals in his comeback attempt with the Baltimore Ravens.

When asked by Comcast SportsNet how his story would end, Richardson said: “Putting on a yellow jacket.”

Richardson, 25, is referring to the Pro Football Hall of Fame, unless he is planning to purchase a canary-colored blazer. This shows Richardson has the confidence. He just needs to show it on the field over the next few months, because he acknowledges this could be his last chance to make it in the NFL. The No. 3 overall pick of the 2012 draft, Richardson is on his fourth team in four seasons. His career average is 3.3 yards per carry. He worked out for several teams before last year’s regular season began, but no one signed him.

You know what, fuck the haters. Good for Trent Richardson. The internet is running wild with his quote about having his eyes focused on the Hall Of Fame. Like how if he has his eyes set on the Hall maybe he should be getting lasik tomorrow instead of me. But fuck that noise, what do we want, 25 year olds to lose their dinosaurs? So what if Trent Richardson cuts back directly into his blockers every single time? So what if he’s always fat and out of shape? Who cares if he can’t stay on a team for longer than a cup of coffee? That’s all water under the bridge, baby! Dream, declare, deliver. If T Rich says he’s a hall of famer, who are we to use video evidence and analysis to say otherwise?

Let’s look at it this way: His career YPC is 3.3, which means he has nowhere to go but up. He took a year off last year, which means he’s fresh and nimble. Sky is basically the limit for him. I’m #TeamTrent all the way.

PS: Had no idea the Ravens signed him. Now there’s no doubt in my mind Trent will hit his stride (if his girlfriend’s name is Stride, amiright?)