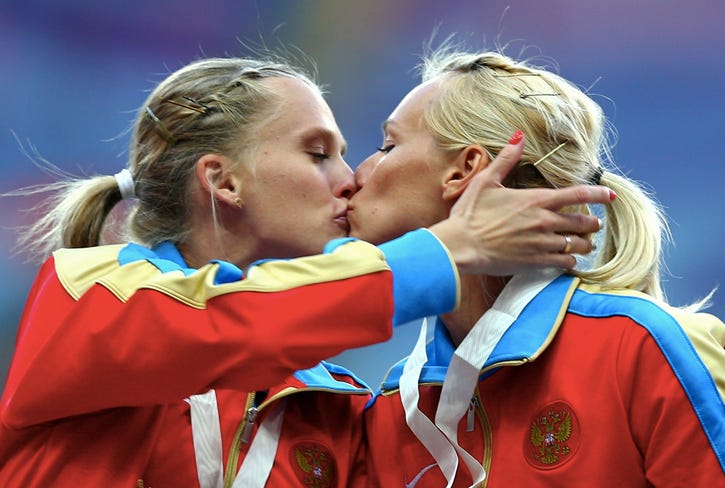 (Source) — Three-time Olympic silver medallist Tatyana Firova questioned why athletes aren’t allowed to take banned substances, saying sportspeople wouldn’t be able to “achieve high results” without them. Firova, a former 400m runner, was revealed last month to be one of the athletes to retrospectively fail a drugs test dating back to the Beijing 2008 Games. In an interview with Sky News, Firova declined to comment when asked whether she had taken banned drugs, but did go on to question why doping is prohibited when a “normal person” can take drugs. “A normal person can take banned substances if they want to,” she told Sky’s John Sparks. “So why can’t athletes take them as well. How else can we achieve high results?” In total, 54 athletes tested positive in tests conducted on samples from the 2008 and 2012 Olympics. From the 31 who tested positive from the Beijing samples, 14 were from Russia.

God bless Tatyana Firova! Here’s a woman who knows what sports fans want, and she gives it to them. We want our Russian blondes to make out on Olympic podiums and we want those blondes to be so doped up that they do superhuman stuff that we can’t help but marvel at. We’re simple.

If more athletes were like her, banned substances would probably be a thing of the past by now. Instead of lying and telling the world that you didn’t take anything, or pretending it was an accident, just ask the obvious question: why the fuck can’t I take this? Why can some regular Joe get prescribed HGH but a professional athlete can’t? It makes no sense! Medical advancements have happened and there’s no doubt in my mind that every person could get put in some chamber, injected with freaky, green poison, and come out looking like Captain America. That treatment exists and you can’t convince me otherwise. So why can’t we just embrace it? Stop smearing the names of good people taking advantage of science and just let them do it. Athletes aren’t even humans anyway so why do we make them follow our rules? When Superman shows up we don’t drug test him, do we? Just marvel at his feats and appreciate the greatness without asking questions. That’s how our athletes should be treated as well.