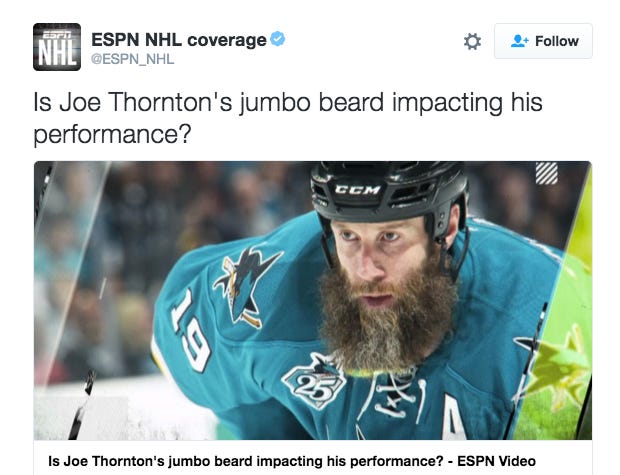 Ah yes, here we are. The Penguins on the brink of winning another Cup. A crazy run by the Pens led by Crosby, hot dog Kessel, and 22 year old phenom Matt Murray. And the Worldwide Leader is all over it…wondering if Joe Thornton’s beard is impacting his performance. If you gave me that headline and asked me who wrote it, 100 times out of 100 I would have told you it was PFT. Even if you told me no it wasn’t, try again, I would sit there, think for 30 seconds and be like, ohhhh, I know, it’s PFT Commenter, writer and podcaster for Barstoolsports dot com. But somehow, it’s actually ESPN. I actually had to check to make sure the account was legitimate and not a parody account because even the name of the account “ESPN NHL coverage” seems like a spoof on their own coverage, or lack thereof.

To be fair to them though, to give ESPN an ounce of credit, I’d rather eat Joe Thornton’s beard than watch Crosby lift the Cup again. Maybe they can do a story next about how many calories are in his beard? That one’s free, next one will cost ya.