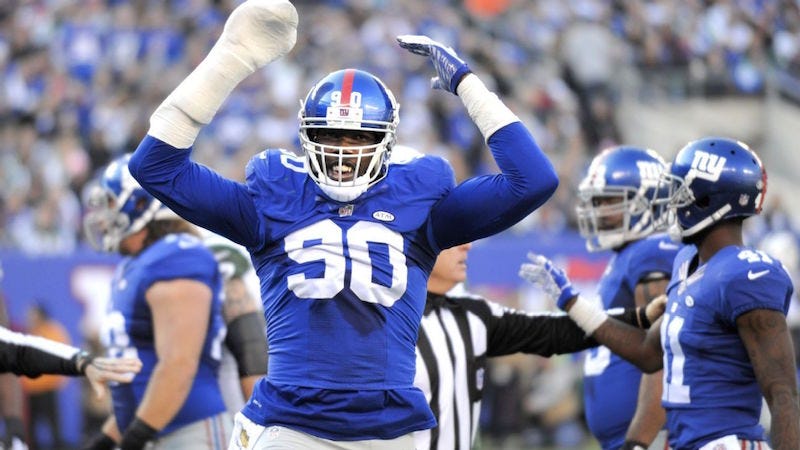 NYDN- This time, there will be no fireworks for Jason Pierre-Paul. No, 11 months after the Giants’ defensive end put his career in doubt when he mangled his hand in a fireworks accident, he’s planning for a different kind of Fourth of July in 2016. He’ll be out of the country this Independence Day, far from any reminders of last year’s debacle. “I’ll be gone,” Pierre-Paul said Monday. “I won’t even be in the United States . . . Where I’m going, they don’t even celebrate the Fourth of July.” And where is that? “I won’t tell you,” he said with a smile.

I am proud of you for making this decision, JPP. Most people would have no problem staying away from fireworks on the 4th of July if they had millions and millions of dollars riding on it. But obviously that was not the case for our boy Jason last year. So getting out of the country altogether and going to a place that doesn’t celebrate the holiday shows signs of maturation. If JPP had stayed in Florida and said he was quitting fireworks cold turkey on the 4th, I’d be worried. Because anyone that has ever been around fireworks knows how intoxicating that gunpowder smell is. First JPP gets a whiff of that gunpowder. Next thing you know, he’s spelling his name with a sparkler, followed by lighting a few bottle rockets or a couple of those parachute guys, and before you know it, he is lighting mortars off one-handed after burning through an entire U-Haul of fireworks. And that’s when Adam Schefter has to start contacting his #sources in Florida hospitals. This is the year that the French Connection rises and takes the league by storm, Jason. Happy to hear you are keeping your nose clean.

Also, I love where the OTA playlist is heading under Ben McAdoo. Nothing but smiles when Benny Mac has the aux cord. Because nobody is unhappy when the Curb, Hangtime, or especially the Price Is Right theme song is playing.

And I need this to be played after every Andre Williams play in camp.