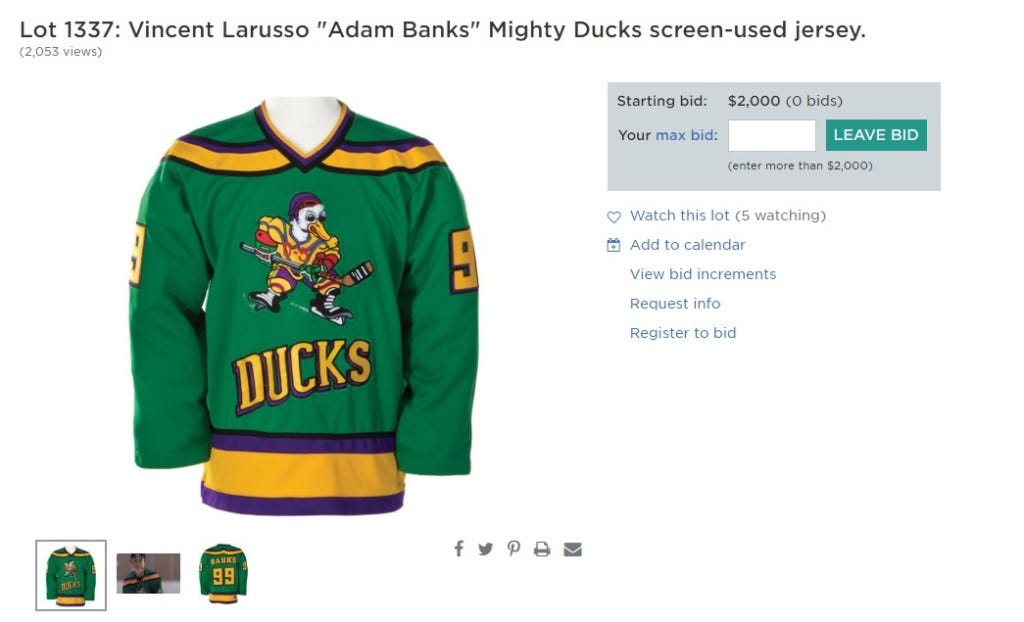 Now I know what you’re all thinking right now. “Starting bid at $2,000 for a jersey that Vincent Larusso aka Adam Banks wore while filming The Mighty Ducks?!? … What a fucking steal!” And I agree. It is a total fucking steal. The only problem is that it looks like the auction on this bad boy is going until July 1, there are already 5 people watching it and the estimation is set to at least $3,000. And when you’re dealing with a game-worn jersey from one of the greatest talents of a generation, you can expect that estimation ceiling to be shattered through. Just think about the history you will have in your possession with this jersey. Think about what Adam Banks means to the game of hockey. He was able to take a rag tag group of idiots and turn them into Minnesota state champions. Without Banks on the team, the Ducks aren’t even a bunch of has-beens. They’re just a bunch of never-wases. His return after injury to Team USA during the Junior Goodwill Games proved enormous in their run to the upset over Iceland in the gold medal game. And his return to the JV Eden Hall Warriors team was the only reason they had a fighting chance against the Varsity. He’s a once in a generation type of talent. Without Adam Banks, there is no Sidney Crosby. Without Adam Banks, there is no Patrick Kane or Connor McDavid or Auston Matthews. That jersey is one of the most important jerseys in the history of hockey and I can’t think of any better way to spend Chernin’s money than to dominate this auction. And if you disagree, well then you’re a cake eater. Plain and simple as that.

Related: Not sure if I’ve posted this before or not but here’s my break down of who was probably able to make it to the NHL and who most certainly was not. 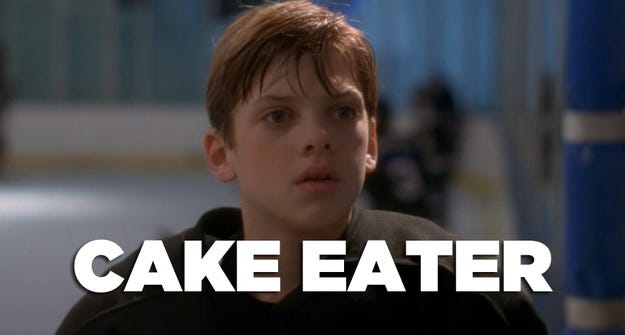 Adam Banks – Banksy 10000% made it to the show. Hands-down, no doubts about it. The kid was probably a no. 1 overall draft. A once in a lifetime type of talent who was lucky enough to be taken from grips of Coach Riley in the first movie. If Banks didn’t get swindled in to playing for District 5, he would have had the same fortune as Bombay. Not even a has-been, a never-was.

Guy Germaine – Most of this is in the name. No way does that hockey name not make its way to the league. His parents knew exactly what they were doing. Plus he had some solid flow, and stellar game with the ladies. Germaine was probably a late 1st round pick, ditched Connie, grabbed a new squeeze and played a couple 60-game seasons. Not a bad life, but nothing like the Banks show. 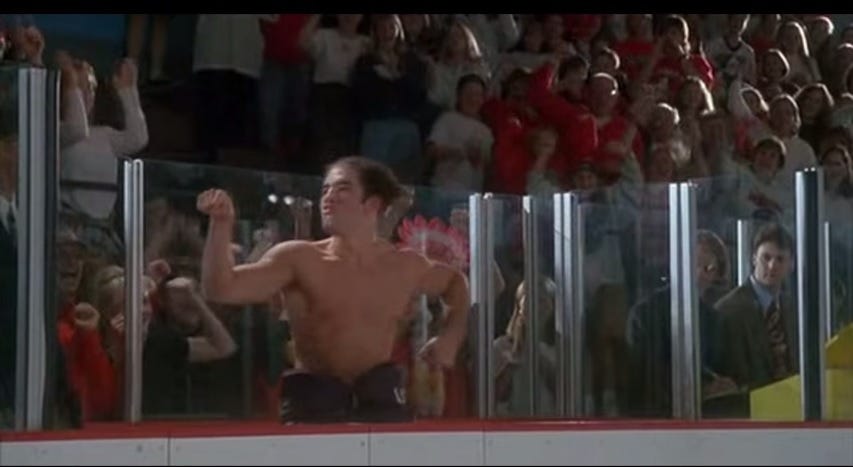 Dean Portman – Out of the Bash Brothers, Portman definitely had the most upside. Sure, Fulton had the shot but so do most blueliners in the league. Portman was more of a badass, less of a liability, and an overall better fit for the game. Once he settles down and stops taking so many dumb penalties just to have an excuse to strip in the box, he could be a perfect 4th liner with penalty killing responsibilities. 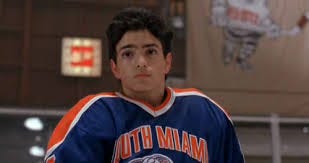 Luis Mendoza – Going out on a limb here and saying once Luis learns how to stop on a consistent basis, he could be one of the most dangerous players in the game. Seriously, if you give this kid some open ice to work on, he’s gonna make you pay. A name that comes to mind here would be Pavel Bure. But he’s a latino and we’ll just go with Pablo Bure. If I’m an NHL scout, I at least give him a shot to see what kind of damage he can do. 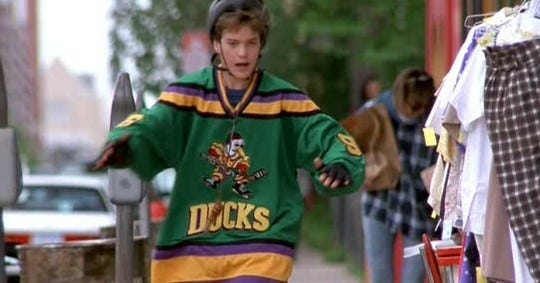 Charlie Conway – Here’s the thing. I could never tell if Charlie was any good or not. The kid was a spazoid in the original, he was a healthy-scratch for the gold medal game in D2, and he was a total headcase for most of D3. But somehow he always managed to find ways to win and be a leader of the team. Besides bailing on the team in D3, I’d say Conway is the type of locker room guy a team needs. Not sure if that initially gets you into the league or not, but hey, he has a chance.

Dwayne Robertson – Cowboy Dwayne has hands for days. He has mitts of a Russian, and the passion of a North American. That’s a solid combo for sure. But no chance does the cowboy have the type of work ethic to make his way out of college hockey. He probably got his degree and moved back South only to be horribly disappointed by the Dallas Stars new uniforms and choice of captain.

Lester Averman – Good player? Sure. Annoying as all hell? Absolutely. Averman gets on everybody’s nerves. The type of guy who gets a stick to the mouth from dudes like Steve Downie during his first year of juniors and decides to hang up the skates for good. He does taxes now.

Fulton Reed – For such a big guy, Fulton always seemed so fragile. He always needed to cling on to somebody, i.e. when he left the team with Charlie in D3. Once you take Fulton away from his little Duck friends, he doesn’t have the stability to be the same Fulton anymore. Probably got cut from the next team he played for. Sucks, but it’s the truth.

Kenny Wu – Undersized and pretty strange. Skills for days, but he would get bullied by Gerbe.

Russ Tyler – All he had was a knuckle-puck. That is the dumbest shot in history. It takes way too long to set up and has no chance of fooling any actual tendy. Get out of here.

Julie the Cat – U.S. Women’s Olympic team? For sure. NHL roster? For sure not.

Connie Moreau – Fell off the wagon after Guy Germaine broke her heart. Nobody has seen her in a while.

Goldberg – Completely forgot about Goldberg when this list was being made. That just goes to show how forgetful he is when it comes to dissecting actual talent. Funny guy, but too fat and slow.