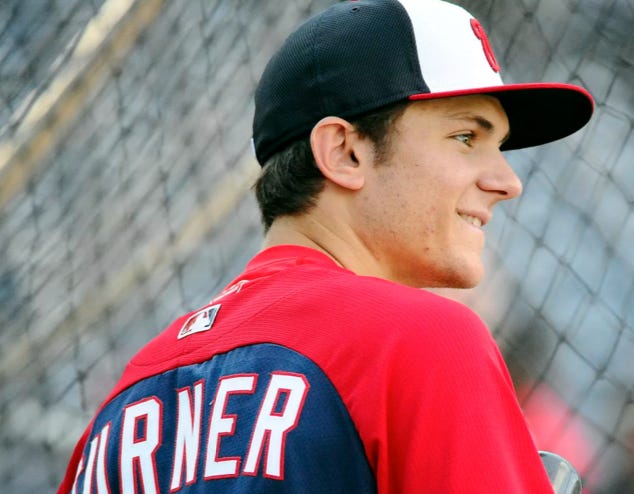 Let me show you two tweets that make as little sense as possible when your goal is to win baseball games:

I feel like I should get on my roof and yell like Stephen A Smith at the clouds about how much of an atrocity this is. Trea Turner has accomplished all that there is to accomplish at the minor league level. They called him up for Friday’s game, he went 3/3 with a walk, and then benched him for the rest of the weekend before optioning him back down to AAA today. Dusty’s plan all along was to start CLINT ROBINSON? We ain’t talking about Mickey Mantle here, we’re talking about CLINT ROBINSON. I like Clint Robinson. I like him a lot. He’s a great bat off the bench. But you don’t bring up a youngster, have him go 3/3, and then crush his confidence and rhythm at the major league level in favor of Clint Robinson. It was the perfect series to get young Trea reps at the major league level and Dusty benched him for Clint Robinson. Do you know what Clint Robinson is batting? .196. Do you know what Danny Espinosa is batting? .196. Michael A Taylor? .197. Jayson Werth? .220. If you don’t think there’s a slot for Trea Turner on this baseball team you shouldn’t be running a fucking baseball team.

Dusty is so infuriating when it comes to this kind of stuff. Players love him if you’re one of “his guys”. Dusty is an old time baseball guy who doesn’t believe in stats, but the eye test. Dusty also hates playing rookies, and instead ops to go with guys who have been around for a while, regardless of if it’s the right move to win games. He was playing Scott Hatteberg over Joey Votto in Cincy just because Votto was young and Hatteberg was a vet. And now he’s pulling that shit here too. I like Dusty. He’s been a better manager than I thought he would be. But Trea Turner coming up, playing 1 game, riding the pine in favor of Clint Robinson, and then getting shipped back to Syracuse is bush league. MEANWHILE STEPHEN FUCKING DREW IS THE FIRST PLAYER OFF THE BENCH. In a close game yesterday, Dusty was so fucking stubborn that he went to Stephen Drew before Trea Turner. Dusty needs to be better. That’s a fireable offense. It’s blatantly not trying your best to win games as a manager.

PS: We saw some realllllly bad #DustyBall in Scherzer’s last start. Nats were up 7-2 on the Phillies, and Max batted for himself in the top of the 8th despite being at 96 pitches. I thought Dusty was just messing around, letting Max get some cuts in. Nope. Max pitched in the bottom of the 8th, riding that pitch count up to 111 for no reason at all. And they had an off-day the next day, so going to the bullpen would have been perfectly fine because the pen had the next day off to rest. No reason Scherzer should be throwing 111 pitches with a 5 run lead and an off-day the next day. Just should not happen.