WWE – Brock Lesnar remains under contract to WWE, however, he has been granted a one-off opportunity to compete at UFC 200. Following this milestone event on July 9, Brock will return to WWE for SummerSlam on Sunday, August 21, live on WWE Network.

Lots of UFC/Brock Lesnar news to recap from the weekend. We’ll start from the beginning, when Ariel Helwani broke the news before Saturday’s UFC 199 that Lesnar was going to fight at UFC 200. This was completely out of nowhere, and huge news for UFC 200, which despite having a packed cards of great fights, didn’t quite have that star power they wanted.

Dana White got furious about the news leaking, denying it at first because he wanted to break the news himself during the PPV. Fast forward to during the show, it was confirmed that Lesnar would in fact fight at UFC 200, and Helwani’s credentials were pulled for life because he got the scoop and made Dana cry. With the addition of Lesnar the card went from ridiculous to best card of all time:

It was then during the show the thing I was hoping would happen was confirmed- WWE announced they are allowing Lesnar to fight at UFC 200, and he will also fight at SummerSlam, which is WWE’s biggest show of the Summer and often the 2nd biggest PPV of the year behind WrestleMania.

The cross promotion here is something Vince has never allowed his guys to do, but it most definitely is best for business. UFC hardos and WWE nerds can always agree on one thing- Brock Lesnar is must-see TV. He’s a stone cold killer. UFC 200 now has one of the baddest dudes on the planet on it’s card, and WWE will be able to ride the momentum from UFC 200 into SummerSlam. Plus, there’s chatter that Vince only allowed this to happen by making a deal with UFC which could potentially see Rousey or McGregor in a match at Wrestlemania. Win-Win-Win for everyone.

Now the latest news from this morning is Brock will be squaring off against Mark Hunt, a big 260 pound Somoan (hmmmm, interesting) known for his brutal knock out blows. His MMA record is only 12-10, but from the quick research I’ve done he’s no slouch. He’s the #8 ranked heavyweight in UFC and knocked out Antonio Silva and Frank Mir in his last two fights.

Lots of people were asking what a Lesnar loss at UFC 200 would mean for the WWE storyline. I don’t think it’d be great, obviously, but depending on how he lost, they could spin it into a good storyline.

The bigger question is OH GOD PLEASE DON’T JUST FEED LESNAR TO REIGNS AT SUMMERSLAM. It’s probably inevitable. Vince is obsessed with Roman Reigns. He doesn’t care that Reigns gets booed everywhere he goes, he hand picked Reigns to be his top guy and he shows no signs of backing down from that. Which means there’s a strong chance, whether they do it at SummerSlam or not, that eventually Reigns will beat Lesnar and I guess just never lose ever again? If Lesnar loses at UFC 200 though, I think they have to have him face someone else at SummerSlam, build his credibility up again, and then have him lose to Reigns at Mania.

It’s very cool that Lesnar will be fighting in two promotion in the span of a month. He gets to kick ass literally in UFC, and then kick ass (still kinda literally because Lesnar doesn’t really give a fuck) and entertain in WWE. Best of both worlds for the fans.

PS: Lesnar being an undershirt guy is legit crazy. But I mean, you tell him, not me. 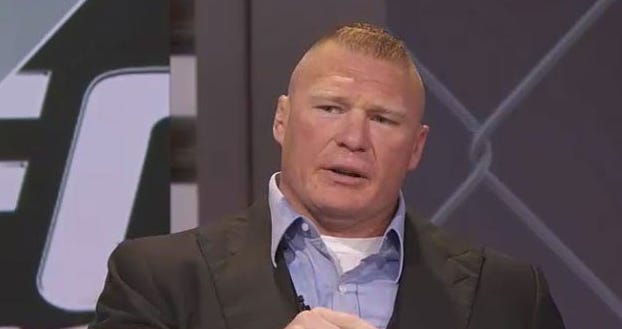 PS: UFC also officially announced McGregor is fighting at UFC 202. They are on such a roll. 199 over the weekend was awesome, and they aren’t slowing down. It’s such a great product right now. I don’t follow it day in and day out, but sitting down and watching the PPVs every month is a must at this point. It’s just so good.