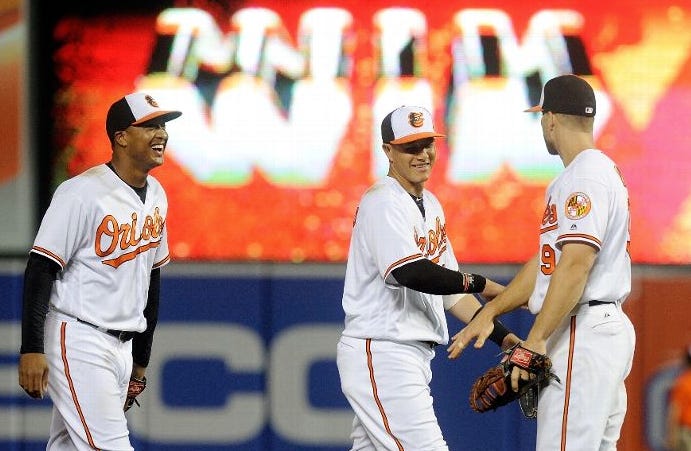 What a four game series between the O’s and the Red Sox. First place on the line, and after the Orioles lost Games 1 and 2 by a combined score of 13-4, it looked like Jared and co would be breaking out the brooms. But not so fast my friend. The next 2 games went a little better. The O’s got basically nothing out of their 2 worst starters, Mike Wright and Ubaldo Jimenez, but outscored the Sox 25-16 and took both games to secure a series split. The O’s now sit at 30-22, 1 game back of Boston, with a series against the 25-28 Yankees coming up.

On Wednesday Mike Wright tried his very best to give the game away after the O’s had a 4-1 lead, lasting only 2 and 2/3 innings and giving up 6 earned. The O’s would go on to hang 13 on Joe Kelly and the rest of the Sox without hitting a home run, pretty impressive. Thursday night was the same result, overall, a crappy outing by Ubaldo, see below, but they got the runs a much different way. 12 runs on Rick Porcello and company, while hitting 7 dongs.

The O’s just flat out abused the Sox bullpen over these 2 wins, 5.8 IP, and 12 earned runs. Even with it being a split, it felt like a win because of how the O’s bounced back, and fought back in the games they won. It would have been easy for them to roll over after going down in both games, but they came back, and showed they can go blow-for-blow with this Red Sox offense, just have to get that pitching figured out. 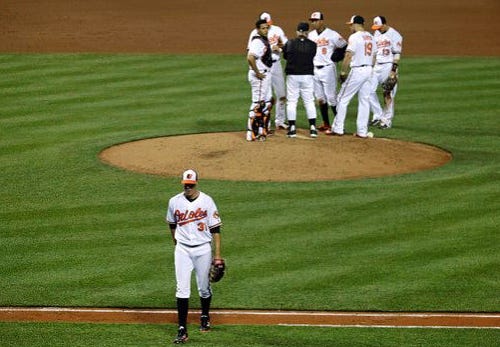 I can’t take this any longer. Ubaldo Jimenez has got to go. How much longer is Buck going to trot him out there every fifth day and watch him piss down his leg? DFA him and eat the money, see if he is willing to go down to AAA and work on some stuff, or just stick him in the bullpen, I don’t care. Watching Ubaldo do this for another 4 months will kill me.

Last start he couldn’t make it 2 innings, and then last night against the Sox he has a god damn no-hitter through 5, and then imploded for 5 runs in the sixth without getting an out.

According to Roch Kubatko, the O’s are willing to eat the remainder of his salary this season, and the $13.5 million next season. The question is who would take that spot? Mike Wright has already been sent down, and when Yovani Gallardo comes back, that will likely be his spot. There just isn’t anyone to replace Jimenez, so I’m not sure how likely them buying him out would be. But he’s 2-6 with a 6.56 ERA this season, and clearly the weak link in this mediocre pitching staff, so I trust they can find someone, anyone better.

With how bad the O’s pitching staff is now (minus Chris Tillman and Kevin Gausman), they can’t afford to have Ubaldo bringing them down every 5 games, just can’t have it. For this team to stay in the A.L. East race, something has to be done. 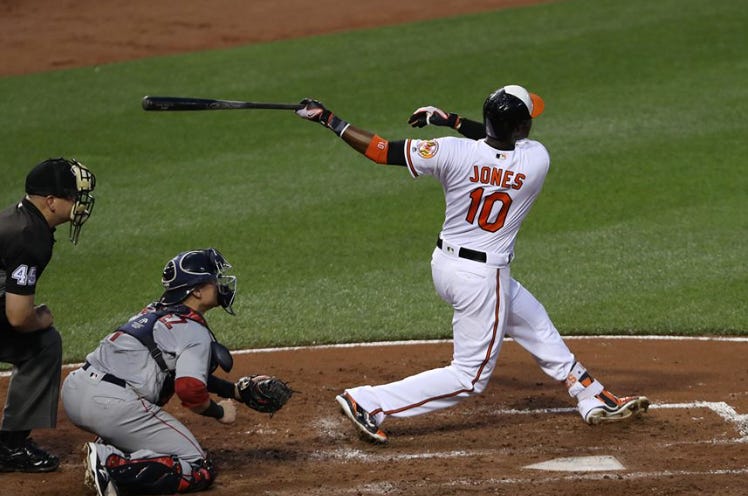 -I love Adam Jones in the leadoff spot now. He isn’t the typical leadoff guy, not a high OBP at all, doesn’t walk much, but he is getting the job done. I know it’s a small sample size, but he is producing. 10/29 (.344), with 2 home runs (both last night), and 7 driven in. He’s seeing more fastballs from he leadoff spot, and he is feasting on them. Looks like we will see Jonsey up top until Buck feels he needs to change it, but for now, I’m loving Mr. Jones at the top.

-Remember when the O’s wanted out of Hyun-Soo Kim‘s contract? That was fun. 22 hits in 20 games for Kim after not playing much the entire first month of the season. Kim is now the starter in right, and isn’t giving that spot back to Joey Rickard anytime soon. He just keeps hitting. Power is starting to come around, he hit his first MLB homer on Sunday, blasted a double to center on Wednesday, and isn’t just getting these little slap singles anymore, the bat speed we heard about is coming around. He’s batting .367 and has an OBP of .449, he also has as many walks (8) as he does strikeouts. He’s a professional hitter, and has a great eye, great to see him taking advantage of this opportunity. Keep on hitting Kimmy, you’re a firework.

-Caleb Joseph had surgery on his….balls this week. Even with him being placed on the 15 day DL, this is probably a longer injury. They haven’t said what the actual injury was, but lets use our imagination. Still not sure how he managed to probably rupture a ball, continue to catch for 2 innings, and then attempt to take an at-bat (he was on deck when the game ended). A hockey player would have gone straight to the hospital. God bless you Caleb Joseph.

JJ will be attending the O’s-Yankees game on Saturday, so if you are in the area, want to head to Pickles Pub with us around 4, grab some brews, eat some greasy food, come on out and lets watch the O’s trash the Yankees and hop back into first place.